This was the final "regular" BBM set.  Starting in 2002 and in every year since then, BBM has put out two "regular" sets, 1st Version and 2nd Version.  As a result, 2001 would be the final year BBM did a "Late Series".  Once again, they selected two teams to "honor".  First, the Tigers changed their away uniforms to ones without pinstripes for the first time since 1983:

Orix changed their uniform design for the 2001 season, the first design change since they had become the Blue Wave in 1991:

The Best 9 insert cards were 3D cards similar to the old Kelloggs cards from the 70's.  The original cards had a purple background while the Late Series cards had an orange background.  As in 2000, there was a much rarer version of each card available to winners of a mail in contest.  The mail in cards were not 3D.  As before, I have none of these, but Collecting Ichiro has both versions of the original and Late Series cards of Ichiro.  There were only 18 Best 9 cards in each edition (36 total) instead of the normal 19 - Bobby Rose, who was the second baseman for the Central League Best 9, does not have a card.  Rose had been unable to come to terms with the BayStars following the 2000 season and (I'm guessing) did not come to terms with BBM for cards in the 2001 set either.

The Golden Glove cards were plastic cards that were semi-transparent.  The backs of the original cards had a red background on the biography section and an orange one on the Late Series cards.  As with the Best 9 cards, there was a mail in winner version that was not transparent.  Collecting Ichiro again has both versions of both cards.

The Prime Time Players insert cards featured one player from each team, once again replacing the original 12 cards with 12 new ones for the Late Series.  I have none of these cards and since Ichiro had gone to the States in 2001, Collecting Ichiro doesn't have any either.

There's a little unusualness about the Leader subset.  Bobby Rose led the Central League in hits in 2000, but he does not have a card in the subset (or the regular set as well).  I know that there have been other players who have appeared in the leader subset without appearing in the regular set since they no longer played in Japan (for example, Ichiro has two cards in this edition's subset) so the absence of the Leader card for Rose is odd (but obviously due to the same reason he's not in the Best 9 subset).  The other odd thing about the 2001 Leader subset is that as far as I can tell it is the only Leader subset to not have a card for the previous year's Nippon Series Champion.  Every set up until 2001 had one and every set after 2001 had one.  I have no idea why BBM chose not to honor the 2000 Giants.

This set only had two subsets other than the Leader subset.  There's a seven card subset called "2000 Memorial Records" highlighting some significant events during the 2000 season.  The feats included were the nohitters thrown by Melvin Bunch and Narciso Elvira, Koji Akiyama and Norihiro Komada reaching 2000 hits, Kazuhiro Kiyohara reaching 400 home runs, Shingo Takatsu reaching 150 saves and Tomaki Kanemoto joining the 30-30-30 club.  Not quite sure what the 30-30-30 club is - Kanemoto had 30 home runs and 30 steals in 2000 - maybe the other 30 is the fact the he was in his 30s?

The 2001 set had two parallel issues.  There is a black facsimile autograph version of 127 cards - 28 of which are split between the original series cards for the Tigers and Blue Wave and the Late Series versions.

There was also a very limited gold facsimile autograph version of only 12 cards.  As you might expect, the 12 cards are evenly split between the 12 NBP teams (as opposed to the black autograph cards which are not evenly split between all the teams).  According to Gary Engel's Checklist and Price Guide, the Late Series cards do NOT include the gold autograph versions which I actually find difficult to believe.  Engel also lists the featured Dragon in the parallel set to be Koichi Sekikawa.  I believe this is incorrect as I have a gold signature version of Masahiro Yamamoto's card.  I don't know if it's a coincidence, but the 12 players who have gold signature versions of their cards are also the 12 players featured in the Prime Time Players insert set.

UPDATE:  Scott Kaneko sent me scans of a couple of the Prime Time Player cards - Hideki Matsui (#PT13) and So Taguchi (#PT22): 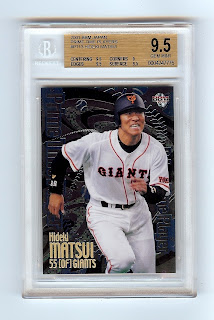 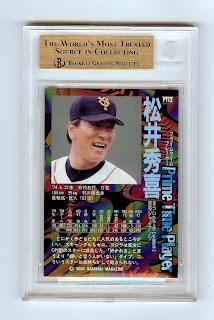 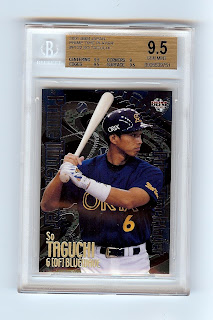 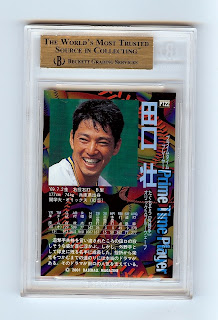 Just to completely beat this topic into the ground - when I was in Japan in March I picked up the original version of the "Special Cards Checklist" (#555).  Here's the front and back of the two versions of this card: 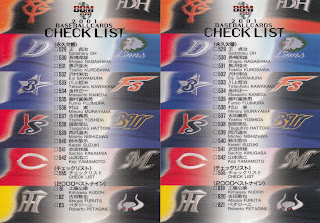 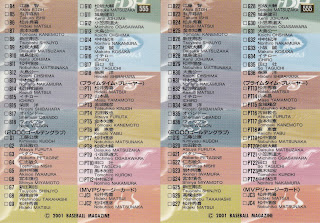 After only including the poster in the 2000 boxes, BBM returned to having both the poster and the information sheet in the 2001 boxes.  The posters continued to be too large for my scanner so I'm including a picture instead. 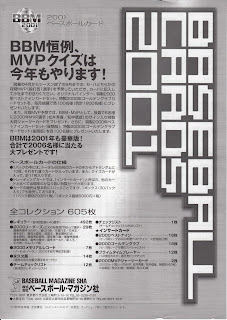 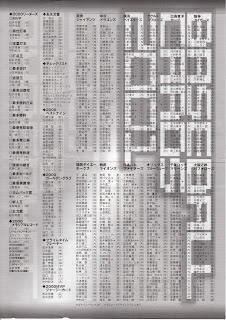