Card Of The Week September 25

The Tokyo Yakult Swallows are the 2022 Central League Champions!  The Swallows clinched their second straight title with a 1-0 victory over the Yokohama DeNA Baystars today.  Yakult won the game in the bottom of the ninth on a walkoff double by rookie Kazuya Maruyama that scored Yasutaka Shiomi from second.
Maruyama was the Swallows' second round pick in last fall's draft out of Meiji University.  As a collegiate player he had been on the Japanese National Team that took on the USA National team in the 43rd USA vs Japan Collegiate All Star Series in the summer of 2019 and therefore had a memorabilia/autograph card in the 2020 Panini USA Baseball Stars & Stripes set: 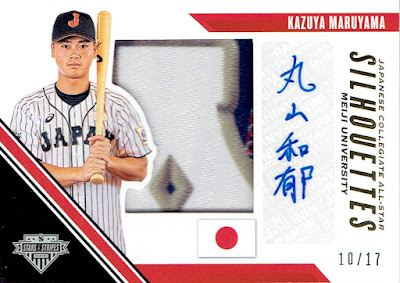 Card Of The Week September 18

Having a busy weekend so I'm just going to show off a card I recently picked up featuring a pair of Swallows sluggers including one who's been having a very good season:

I came across an auction on Ebay recently for a "Glorious 3D" insert card for Roki Sasaki from the 2021 BBM Glory set.  The seller labeled it as a "rookie card" which I pretty much ignored since many sellers list ANY Japanese baseball card for a player as their "rookie card".  But when I looked a little more closely at the card itself I noticed BBM had labeled it a rookie card by putting their little "rookie" icon on the back.
Here's the front and back of the card (I swiped the images from the auction): 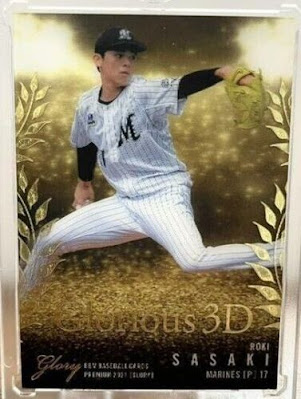 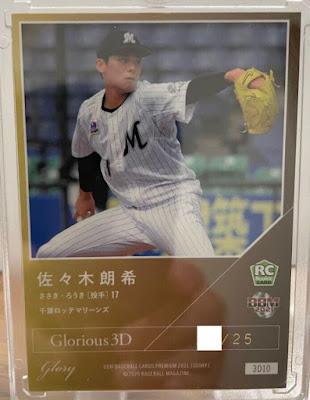 I did a post recently that listed all of Roki Sasaki's rookie cards.  I pointed out that he was drafted in the fall 2019 NPB draft so all his rookie cards were published in 2020.  Here's the hair splitting part of the question - the set this card is part of was published in December of 2020 but has a  "cover date" of 2021!  You can see the "cover date" on the back of the card - it's the little icon below the "rookie" symbol that says "BBM 2021" as well as the text towards the bottom identifying the set as "BBM Baseball Cards Premium 2021 [Glory]".  Of course, right below that you can also see a 2020 copyright line.
My inclination is to say, no, it's not a rookie card despite what BBM says.  The card (and Sasaki's base card in the set) not only has a 2021 cover date but there had already been about 10 previous Sasaki cards from BBM with 2020 cover dates that were as "rookie"  cards.  I kind of feel this one's just late to the party.
What do you guys think?
Posted by NPB Card Guy at 9:42 PM No comments:

Card Of The Week September 11 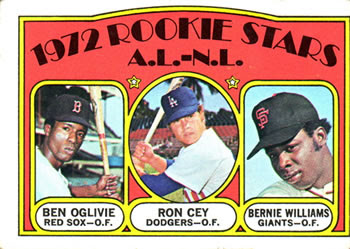 Yesterday's post about the first baseball game I ever went to mentioned Bernie Williams, the San Francisco Giants outfielder who ended up spending six years playing for the Hankyu Braves in the late 70's.  I had decided to do this week's Card Of The Week post about him and when I was looking up his cards over at the Trading Card Database something struck me about the above card (1972 Topps #761) - I have Japanese cards depicting all three of these players.  (I feel compelled to point out that while this is Oglivie and Cey's rookie card, this is not actually Williams' rookie card - he also appeared on multi-player "Rookie Stars" cards in both 1970 and 1971.) 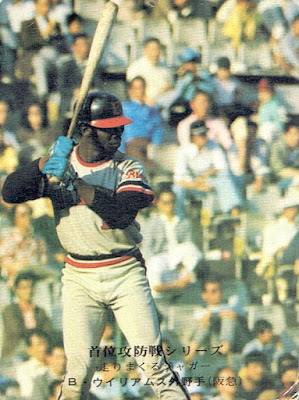 Ben Oglivie sent 1987 and 1988 as a member of the Kintetsu Buffaloes.  Engel lists eight vintage cards for him including four Calbee cards and two Takara cards.  Here's his 1987 Takara card: 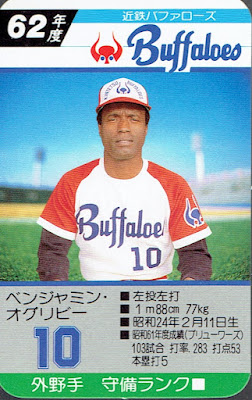 Now I'm sure you've been scratching your head about me having a Japanese card of Ron Cey since he never played for a Japanese team.  In fact as far as I know, he never went to Japan as part of an MLB All Star team.  However Japan - in the guise of the Yomiuri Giants - came to him.  The Giants did spring training at Vero Beach, Florida in 1975 as the guests of the Dodgers.  Photos from this appear in both the 1974/75 Calbee set and the 1975 NST set.  There's a card of Tsuneo Horiuchi from the NST set (#224) that shows him pitching to the unmistakable image of the Penguin: 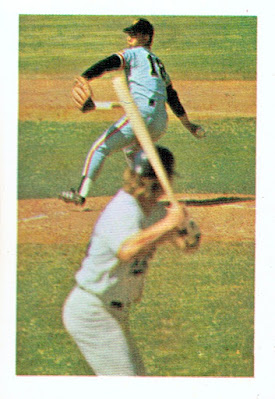 So while it's not an "official" card of Cey, he does make a cameo appearance on it.

Yesterday, September 9th, was the 50th Anniversary of the first baseball game I ever went to.  We had just moved into a new house in the Bay Area and my grandparents and my uncle had come out to visit from Ohio.  The Reds were in town to play the Giants and my father, my grandfather, my uncle and I all went to the game.  It was a Saturday afternoon game that the Giants won 2-1 on a walk off two run home run by Dave Kingman.

To be completely honest, I remember almost nothing about the game.  Really the only thing I remember is a foul ball landing near us that my uncle failed to corral.  (My uncle - who is a big baseball fan, especially for the Reds - says he's never gotten close to catching a foul ball at an MLB game ever since.)  And it's not like this game was a huge catalyst in my love of baseball - it wasn't until 1975 that I started following the game and collecting baseball cards.  But it was my first game.

In looking at the box score for the game, I'm struck by a number of things.  The big thing is how low the attendance was - 6,199!  I don't think I've ever been to another MLB game with attendance that low and I've been to many minor league games that had more people.  I was disappointed that neither Willie May nor Willie McCovey was in the lineup that day - Mays had been traded to the Mets four months earlier and McCovey was suffering through an injury plagued year.  On the other hand, I saw Hall Of Famers Johnny Bench, Joe Morgan and Tony Perez along with Pete Rose and Bobby Bonds.

If you had told me that there'd have been one player from that game who went on to play in Japan, I'd have guessed it was Bernie Williams, an outfielder who spent seven years in the Giants organization and one with the Padres before joining the Hankyu Braves for six years starting in 1975.  But, no, Williams didn't play in the game (although he was on the roster at the time because he pinch hit in one of the games of a double header the next day.  The one player from this game who eventually played in Japan was Reds center fielder Bobby Tolan, who spent 1978 as a member of the Nankai Hawks, hitting .267 in 98 games.  There are no known Japanese cards of Tolan - Calbee pretty much only did Central League players that year - but Tolan's photo appears in the "Americans In Japan" section of many of the editions of the late Wayne Graczyk's annual "Japan Pro Baseball Fan Handbook".  I scanned this photo from the 1988 edition: 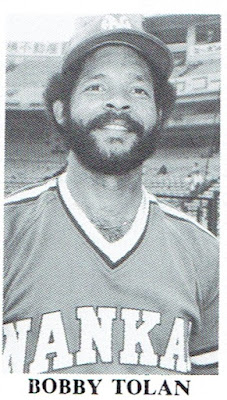 Oh, and how did I celebrate this anniversary?  At a baseball game, of course: 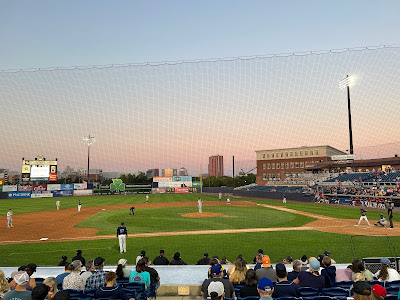 I got inspired - as I often do - by a post Night Owl Cards did a while back.  This particular post had to do with baseball cards featuring magazine covers - specifically some Fleer issues from the late 90's that had cards showing covers from Sports Card Digest and Sports Illustrated.  I thought to myself "Hey, it might be fun to do a post of Japanese cards showing covers of Japanese baseball magazines."  The problem, though, is that there aren't very many of these and they all feature "Shukan Baseball" (or Weekly Baseball), a magazine published...uh...weekly by Baseball Magazine SHA (the parent company of BBM) since 1958.  The other problem is what's out there pretty heavily features Shigeo Nagashima.  But I still thought this might be interesting so let's dig in...

The earliest appearances of any Shukan Baseball covers on baseball cards appear to be from the 1975 NST set.  This set was dedicated to Nagashima's career and includes sixteen cards that show him on the cover of the magazine.  I only have five of these (I'm going to include the cover date of the magazine when possible but some of these cut the date off):

It would another 23 years before Shukan Baseball covers would make it onto baseball cards again.  In 1998, BBM included a nine card subset in their flagship set to celebrate the 40th Anniversary of the magazine.  The nine covers featured included the first ever issue from April 16th, 1958.  Each card features a "40 years of Shukan Baseball" logo superimposed over the cover.  Here are the cards:

The next card to feature a Shukan Baseball cover was kind of an oddball - it was a card included with Sports Card Magazine (SCM) #9 which was published in May of 1998.  It reproduces the cover of the October 9, 1961 issue featuring Hiroshi Gondoh of the Dragons and Nagashima.  It's a little unclear to me why BBM created this card as it does not appear to be a promotional card for any other BBM product.  My best guess is that since Gondoh was in his first year as Baystars manager they wanted to highlight the history between him and Nagashina, who was managing the Giants at the time.  The back of the card shows a current photo of both men along with Nagashima's career batting statistics against Gondoh.  Here's the front and back of the card: 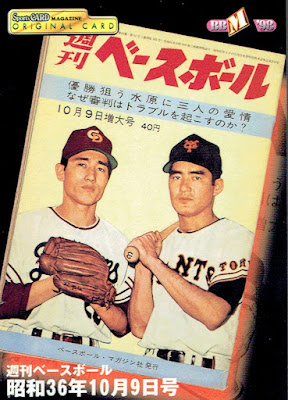 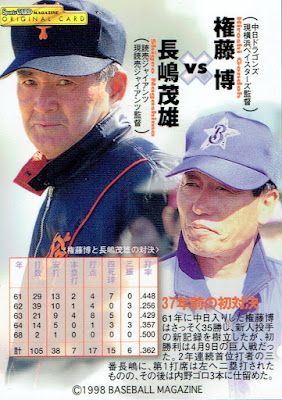 Nagashima may have batted .362 for his career against Gondoh but Gondoh had the last laugh in 1998, leading the Baystars to the Nippon Series championship, the first for the franchise in 28 years and so far their only championship in Yokohama.

The last cards that I know of featuring Shukan Baseball covers came out the following year in 1999 in another set dedicated to Nagashima.  The "Mr. Giants" set from BBM included five cards showing him on the cover of the magazine.  I have four of these - I'm missing card #G47 which showed off the cover of the August 20, 1958 issue.  Here are the other four cards - the cover date for each issue can be found in the lower left:

As far as I know, the 1999 cards were the last cards done that show off Shukan Baseball covers (although there was yet another Shigeo Nagashima BBM set in 2001 that I don't have that could have had some).  I think it'd be an interesting theme for BBM to revisit sometime, although they could probably lower the amount of Nagashima cards they include.