Card Shops In Japan: Match Up

My original plan in Nagoya was to visit all three card shops there on the fourth day of my trip.  However due to my back and hip issues (and my generally being out of shape) I was pretty much done for the day after Sean and I had visited Sports Card BITS and Mint Ponyland.  And while I spent the entire next day in Nagoya, all three card shops were closed that day (as they are all closed on Wednesdays).  So it wasn't until the following Monday when I stopped in Nagoya again on my way back to Tokyo from Fukuoka that I finally got around to getting to the third Nagoya store - Match Up.

Match Up is located in the Naka Ward of Nagoya, on Wakamiya-odori right across the street from Wakamiya-odori Park.  It's on the second floor of a building called Aoki Building West.   There's a parking garage (or at least the entrance to a parking garage) on the first floor and it's not entirely clear when looking at the front of the building that there are shops in the building - especially if like me you aren't looking up and noticing the big obvious sign for Match Up.  You have to walk into the garage to get to the staircase to go upstairs to the store - I think that's the door to the staircase visible on the right in this photo (just below "20:00"): 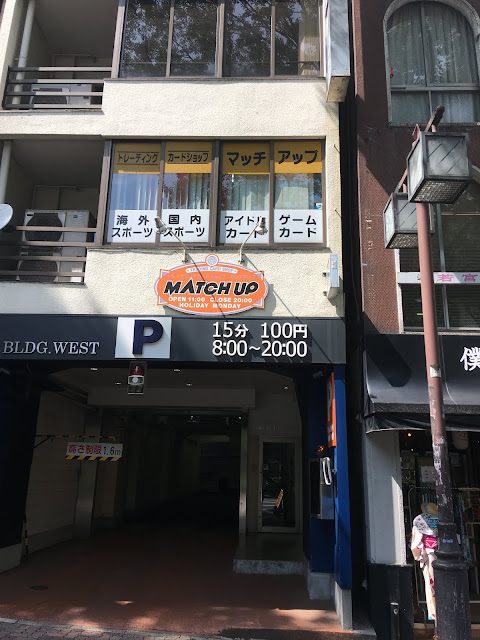 Here's the door to the store on the second floor.  The store is a little nicer inside than you'd think from how the door looks. 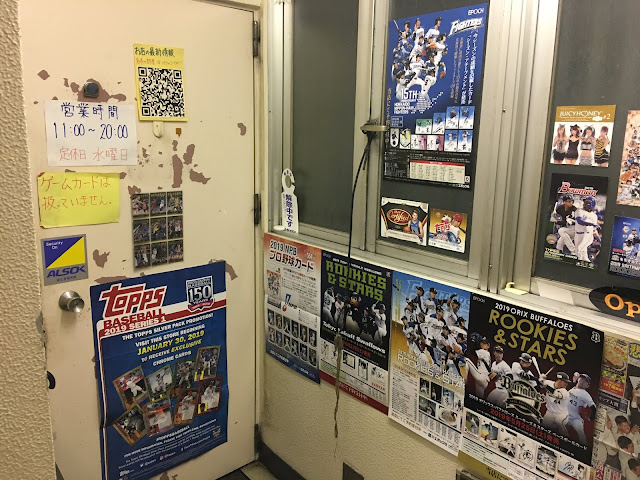 You can see the store is nicer than the door in these two photos: 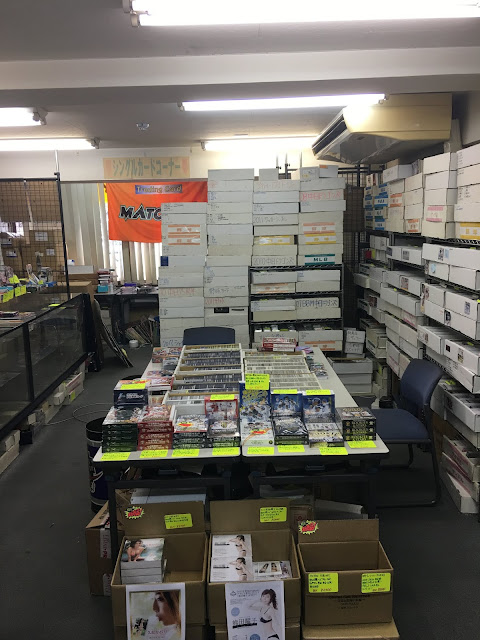 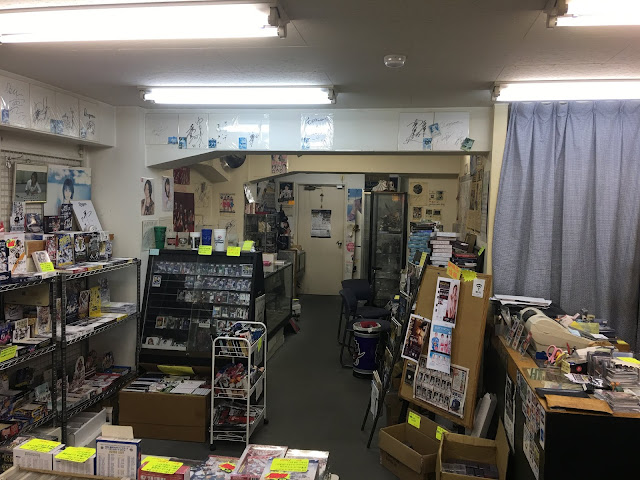 I'm going to be honest here - I didn't really give this store a chance.  I had misinterpreted something Ryan had told me when talking about the Nagoya shops - "Match Up will be least useful for you, but that doesn’t mean it should be skipped, just a lower priority" - as basically saying that they wouldn't have anything I was interested in and as a result I didn't set aside much time for it.  (Although in my defense I was fitting it into my already pretty busy schedule.)  The owner was very friendly and I should have taken more opportunity to see what I could find there.  Instead I just asked about the 2004 BBM 1st Version Japan National Team inserts as opposed to some cards that might have been more likely for him to have carried.

What I did see at the store was a lot of assorted singles but I can't tell you how far back they go.  He had a lot of opened box sets and Idol cards.  I ended up not buying anything here - only the second store in the thirteen I had visited at this point in the trip that I didn't spend any money at.

The store was written up in Sports Card Magazine #119 in September of 2016.

I believe that there's a sign by the cash register in the last picture that indicates that they take credit cards.

Oh, and let's take a more detailed look at something else in that last picture: 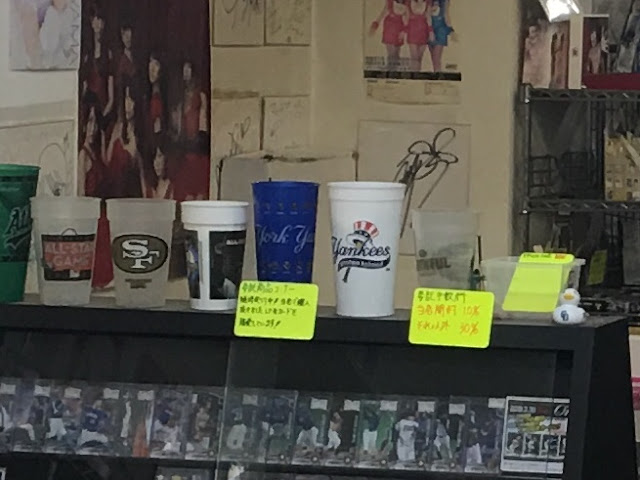 That's a Staten Island Yankees cup!  Huh.  I wonder how that ended up here.  I asked the shop owner where he got the cup.  He said it was a gift from a customer.  Hmm, do I know any Staten Island Yankee fans who are known to frequent card shops in Nagoya...

Seriously though - I know that both Zippy Zappy and Ryan like this store so I feel bad I didn't take more time here.  Next time I'm in Nagoya I'll correct that oversight.

Here's a map of the store's location:

Nagoya's Mandarake store is located roughly a half mile to the southwest of Match Up so it's an easy walk if you want to hit both stores.
Posted by NPB Card Guy at 10:38 PM 2 comments:

2008 Upper Deck USA Baseball 2007 Japanese Collegiate All Stars Set - Where Are They Now?

When I did the retirement post for Sho Aranami the other day I got thinking that I should do a "Where Are They Now?" post for the 2007 Japanese Collegiate All Star cards included in the 2008 Upper Deck USA Baseball set (that included Aranami).  Then when Fuji left a comment on the post asking about the guys in the set, I figured I'd go ahead and do the post.

In 2008 Upper Deck issued a box set called "USA Baseball".  The 60 card base set featured the collegiate and "junior" USA National teams for 2007.  Each box contained a number of autograph and/or memorabilia cards organized in various sets.  The Japanese Collegiate All Star team that had played the collegiate Team USA in the annual US-Japan University Baseball Championship in 2007 (well, annual up until that year anyway - it's mostly moved to an "every other year" schedule since then) was featured on six of these sets.  The most common of these were jersey cards for all 22 members of the team.  These were not serially numbered.  There were also 22 autograph cards (serially numbered to 50), 22 jersey patch cards (numbered to 20), 22 jersey letter cards (numbered to 15) and 21 flag patch cards (1 of 1) (for some reason there is no flag patch card for Shota Ohno).  There are also cards (numbered to 5) featuring autographs of the MVP of both the USA and Japanese teams - Pedro Alvarez and Shinya Muramatsu.

Of the 22 Japanese players in the set, 18 of them have gone on to play in NPB.  Seven of them were still active in NPB in 2019 although one of those (Takahiro Iwamoto) apparently retired at the end of the season.  10 of the players on the team were also on the 2008 Japanese Collegiate All Star team and were included in BBM's set for that team.  Eight of the players in the set were first round draft picks.  Three players played in the industrial leagues after graduating and before being drafted into NPB (actually if you include the four who didn't play in NPB there were seven players who played in the industrial leagues after graduation).

Three of the players (Takashi Ogino, Shota Ohno and Yuki Saitoh) made an All Star team at least once (although Saitoh's was purely due to his popularity, not his pitching).  One of the players (Ryo Sakakibara) was the Pacific League Rookie Of The Year in 2010.

Here's a summary of the players who went to NPB:

Here's the jersey card for each of these players along with a card from their time in NPB.  I've tried to use the latest card I have of each player although I've picked a different card for some players because I've already used their latest card in other Where Are They Now? posts.  I've also sometimes picked a different card just to not show multiple cards from the same set.


Of the remaining four players in the set, only one of them - Shota Waizumi - had any other baseball cards.  He appeared in four of BBM's Tokyo Big Six sets in 2008 and 2009.

In his comment the other day, Fuji had basically asked the question of who the best players in the set were (ok, actually he asked if anyone in the set was "having a hall of fame career" or at least of "hall of very good career").  I don't think anyone from this group is going to the Hall Of Fame, at least not as a player.  The player with the best career is probably Takashi Ogino followed by Shota Ohno and Hiroki Uemoto but I'd be interested in hearing what people who know more about Japanese baseball than me think.
Posted by NPB Card Guy at 11:28 AM 3 comments:

Card Of The Week October 27

Last Wednesday the Fukuoka Softbank Hawks completed their sweep of the Yomiuri Giants in this year's Nippon Series.  It was the Hawks' third consecutive championship, their fifth in the past six years and their sixth in the past nine years.  As I've done the past few years I'm going to highlight the Series award winners.  The winners of these awards used to have extra cards in BBM's annual Nippon Series set that was published from 1991 to 2012.

It took me a little while to find a "regular" card of Despaigne that doesn't show him in his standard pose.

In addition, the Korean Series ended yesterday.  It was a four game sweep as well with the Doosan Bears defeating the Kiwoom Heroes to win their third championship in the past five years (it's also the fifth straight year the Bears have played in the Series).  Jae-il Oh was named MVP of the Series.

Shohei Tateyama of the Swallows announced his retirement back in mid-September.  Tateyama was a star pitcher for Yakult for about five seasons in the late 00's and early teens but suffered from an inability to stay healthy.

He returned to the Swallows rotation in mid-2015, going 6-3 with 2.89 ERA down the stretch as the Swallows made a somewhat surprising (and ultimately successful) run for the Central League pennant.  He ended up starting and losing Game Four of the Nippon Series against the Hawks that year.  He's been limited to only 19 starts with the top team over the past four seasons (including his retirement game this season) and I'm not sure if it's been injury or ineffectiveness (or both) that's responsible for that.  He'll be the farm team pitching coach for the Eagles starting next season.

Tateyama is another of the rare Japanese players who had a pre-rookie card.  He was on the 2001 Baseball World Cup team while he was still in college and was featured in the 2002 BBM Japan National Team set.  His first BBM cards were in the Rookie Edition and 1st Version sets in 2003.  His first Calbee card wasn't until #203 in 2005.

As always here's a bunch of cards from his career: