After finishing up at Sports Cards BITS!, Sean and I headed to our second stop of the day, Mint Ponyland.  Mint Ponyland is located west of Nagoya Station, right next to the Nakamura Koen subway station (which is actually five blocks south of Nakamura Koen itself).  The station is at an intersection of two main roads, one of which is Taiko-dori.  If you're not sure if you're at the correct intersection, there's a landmark you can look for: 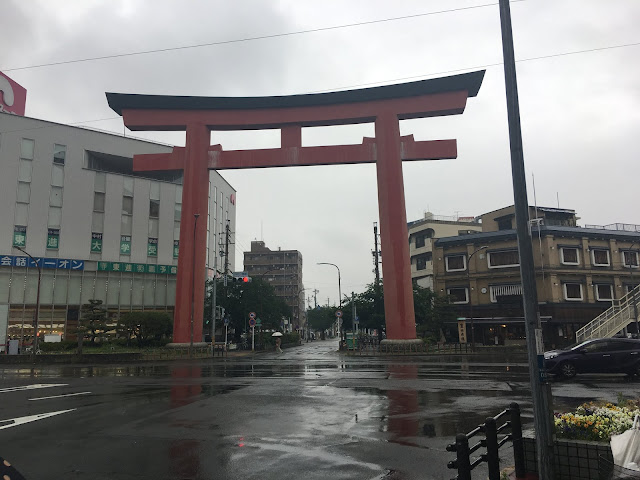 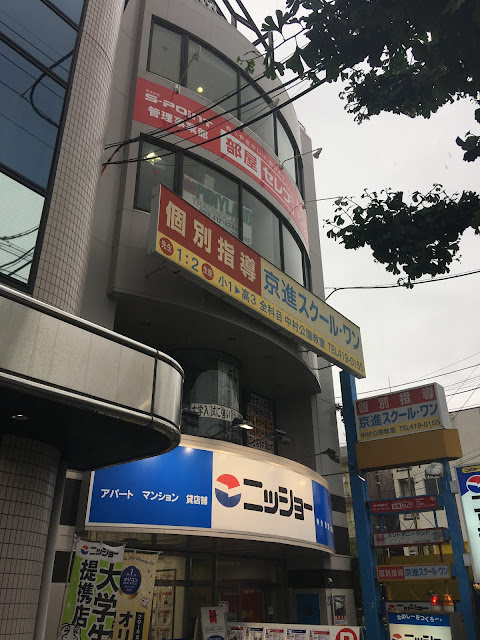 The store is located on the third floor of the building.  Here's what the store front looks like inside the building: 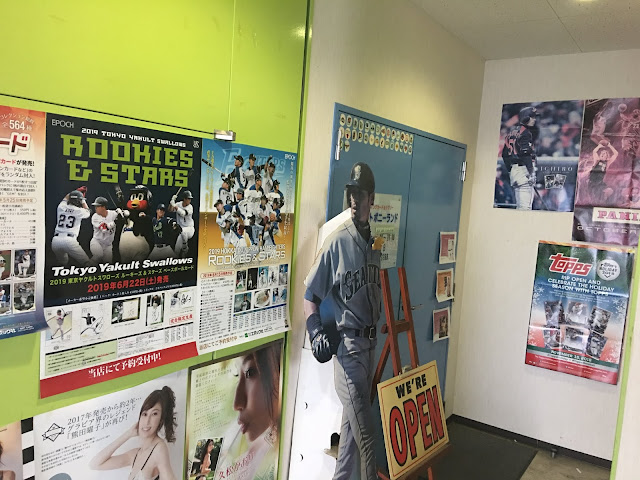 It was a bit forbidding looking and despite the sign we weren't sure the store was actually open.  But we tried the door and it was unlocked, so we walked on in.

The one thing that sets Mint Ponyland apart from every other Japanese baseball card store that I visited is that it's big.  I don't think I was in any store that had as much space.  Here's a photo of the interior: 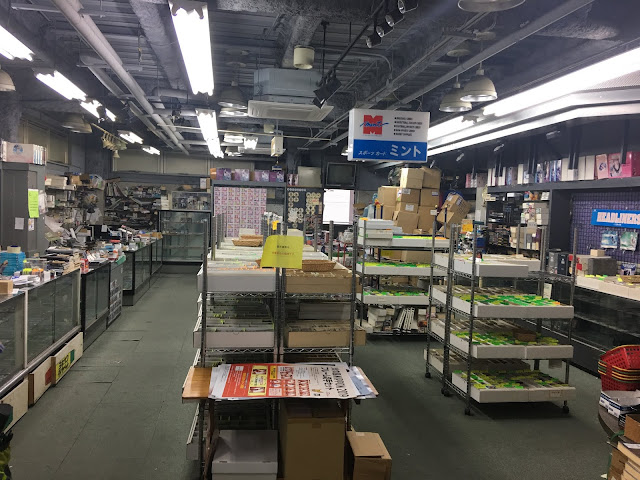 Sean mentioned in his write up of our visit that he talked a little to the store's owner (who spent most of our visit sitting in the corner working on his computer) and discovered that he actually owned the entire building which is why he could devote so much space to his shop.

Despite the spaciousness of the store I was a little disappointed with the selection of cards.  He had a lot of BBM singles but it seemed that he didn't have anything earlier than around 2002.  Since I was mostly looking for BBM singles from the 1990's, he didn't have much that I was interested in.  But if you're trying to complete BBM sets from 2002 or later, this is an excellent store to do set building at.  Ryan thinks that their common single prices are 50 yen, just like at BITS.

Beyond the BBM singles I also saw that they stocked some oddball cards - I picked up a few 2010 Georgia Coffee cards and some 2003 JPBPA cards.  They also had Calbee singles from the aughts as well as a handful of 1970's era ones.  Sean noted that they had a selection of MLB and soccer cards.  They also have a large inventory of Idol cards - I'd seen these in other stores but I'm not sure there were any other stores that had as many.

The owner was friendly enough when Sean and I asked him questions and when I made my purchase but I got kind of a weird vibe from the place.  Not from him necessarily.  The store just felt kind of odd.  This is going to sound weird but something about the place reminded me of a dry cleaners.  I can't tell you if it was a smell or just the feel of the air in there or even if it had something to do with the fact it was raining outside but it was just a weird vibe.  Not that it would prevent me from making a return trip there if I thought they'd have something I was looking for.

I'm not positive but I think they take credit cards.

Here's a map showing the location of the store.  The location is actually for the Real Estate Agency on the first floor:

That looks like a big shop for sure. Wish I could visit!

I kinda get your weird vibes. I kinda chalk it up to how musty and dusty the place is. There are entire sections of that part of the store sectioned off to the public where you can find old toys and cards that aren't available for sale and I'm not sure the owner regularly opens the windows to let fresh air in.

Then again, given how a lot of the cards in the store appear to be sunburnt (you might not have noticed this if you were only looking at BBM singles) I'm not entirely sure what they're doing except obviously catering to the kaifu-gumi (開封組) aka the Box Breakers.

I used to like Ponyland a lot but in recent times I've come to consider Bits my go-to and would probably only go to Ponyland for the idol/adult cards. I hope to one day go to the handshake events Ponyland hosts with the very models who got their own sets. The fact that it's the most inconvenient to get to compared to the others is a big negative.

For me the combination of soft core pornographic images casually strewn about combined with the total disinterest in making the place look in any way tidy or welcoming to customers gave me a very weird vibe.

Then when you get past that initial awkwardness, you are left with the kind of blah product selection and its just not really worth the visit.

Owning an entire building in Japan... and being able to dedicate one of the stores to a card shop. Now that's what I call "living the dream".