BBM announced two upcoming sets the other day - the 2009 "Touch The Game" set and a 40th Anniversary set for the Tokyo Yakult Swallows.

"Touch The Game" is BBM's high end set. The set has 132 cards in it which breaks down as 108 "regular" (player) cards (9 per team), 12 "subset" cards (1 per team) and 12 checklist cards (1 per team). The big attraction of "Touch The Game" is the memorabilia inserts and this year's set has the usual boatload - pieces of balls, bats, uniforms, etc plus autographed inserts. The set will be in stores in late September.

"Touch The Game" is not my cup of tea, so I don't get very excited about it. The Swallows' 40th Anniversary set, however, is just the kind of thing I like. I've been eagerly anticipating this set all year. The set celebrates the 40th Anniversary of Yakult acquiring the team from Sankei in 1970. Like the other recent Anniversary sets that BBM has done in the last year or so, it is a 99 card set containing six "victory" cards, 61 cards of OB players, 26 cards of the current team including the manager Shigeru Takada, and six team record cards (I think). There's also an insert card set for the team's Best 9 over the last 40 years and the usual photo and autograph inserts. The set will be available in late August.

For those who can't wait that long for their Swallows history fix, the team has had a 40th Anniversary website up since the beginning of the season. (Thanks to Tsubamegun for the info.)
Posted by NPB Card Guy at 5:03 PM 1 comment:

Card Of The Week July 26

The Chiba Lotte Marines have announced that Norifumi Nishimura will be have the unenviable task of replacing Bobby Valentine as manager following this season. As a nod to the just completed All Star games, here's Nishimura's lone appearance in a BBM All Star set from 1993 (#A62): 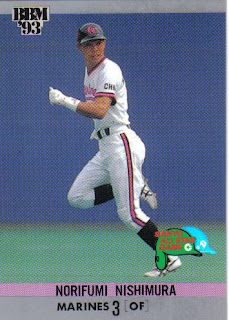 Last week, BBM's website listed a new set - the 2009 Lions Classic set. This set is a tie-in with the Lions Classic set of games which Yakyu All-Stars describes here. The throwback uniforms this year are from the 1980's.

The new Lions Classic set is a 27 card box set that contains 13 cards of active players wearing the throwback uniforms, 13 cards of OB players from the 1980's and one insert card. There are also randomly inserted autograph cards. I'm a bit confused about the release date - the Google translation says it was released in early June, but since the Classic games didn't start until June 27th, that doesn't sound right. The Babel Fish translation says early August, which makes more sense.

I don't know when the Lions started doing this "Lions Classic" set of games, but I guess this now explains this set from last year - it was the tie-in to last year's set of games with the throwback uniforms being the Nishitetsu Lions uniforms from the 1960's. Perhaps next year they can bring back the hideous Taiheiyo Club Lions uniforms from the 1970's.
Posted by NPB Card Guy at 9:04 PM No comments:

Card Of The Week July 19

Dragons catcher Motonobu Tanishige caught his 2,238th game last week, moving him into second place behind Katsuya Nomura (2,921 games) on the all time list of most games caught. (I think he passed Tsutomu Itoh, but I'm not positive.) Here's his 1989 Takara card from when he was an 18 year old rookie with the Yokohama Taiyo Whales: 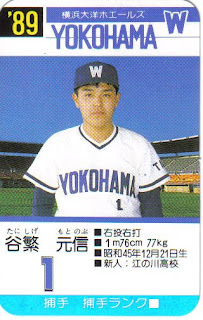 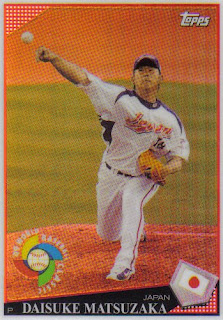 Some updates on what Topps has produced in the way of World Baseball Classic cards in the last month or so.

- The World Baseball Classic Redemption cards are finally being shipped. I got the Daisuke Matsuzaka card shown above (#10) in the mail the other day. The cards look like the regular 2009 Topps sets, but are all "chromed". Matsuzaka and Yu Darvish are the only Japanese players in the 10 card set.

- Topps has issued a 13 card "eTopps" World Baseball Classic set. The set includes four Japanese players - Yu Darvish, Ichiro, Norichika Aoki and Hisashi Iwakuma plus a "patch" card showing the team celebrating winning the final. If you're not familiar with eTopps (and I really wasn't until I was looking for this stuff), it's kind of a weird thing were people buy and trade cards that Topps holds onto for them. So you own cards that you don't physically possess. You can get Topps to actually send you the cards, but it looks like they end up locked up in plastic so even when you have them, you can't actually touch them. Personally, I think I'll pass.

- Topps' Allen & Ginter set features a set of "box topper" cards (i.e. cards that are not in packs but are included in the unopened boxes of cards) that show highlights of the WBC. There are five cards in the set - Netherlands upsets Dominican Republic, Cuba sets HR Mark in WBC, USA beats Puerto Rico in last at-bat, Japan advances to the final, and Japan wins the WBC. Each card is roughly 6 inches by 9 inches and features a large picture in the center flanked by two player "cards". All the images on the card are drawings rather than photographs. The Japanese players featured are Norichika Aoki and Daisuke Matsuzaka on the "advances to the final" card and Ichiro and Hisashi Iwakuma on the "wins the WBC" card. (I know - it's stunning that they didn't include Yu Darvish given the constant and ridiculous speculation about his future.)
Posted by NPB Card Guy at 11:10 AM No comments:

Card Of The Week July 12

I love Yamakatsu cards from the 1970's. Big cards with full bleed photos. Often the pictures were action shots like this 1976 card of Giants pitcher Shigeru Kobayashi: 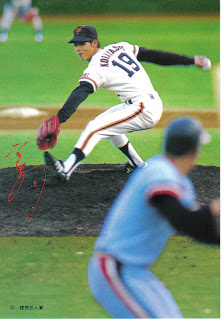 - I'm pretty convinced now that Lotte Bikkuriman is not issuing Pro Yakyu stickers this year. I've seen nothing on their website. I asked Deanna Rubin about them and she hasn't seen them either. So one less collecting option (although think of the calories you'll save!)

- Deanna let me know about something new BBM has been issuing this year - figurines for the Dragons, BayStars, Tigers and Fighters. Actually, these aren't new - BBM did them last year at least - but this year's issue includes baseball cards. Deanna was kind enough to take a couple pictures of what she's gotten and gave me permission to post them.

This first picture shows the Kazuyoshi Tatsunami figurine, along with the accompanying card and the box it came in. This is actually the "mystery" figurine for the Dragons set as it shows him as a rookie (in 1988): 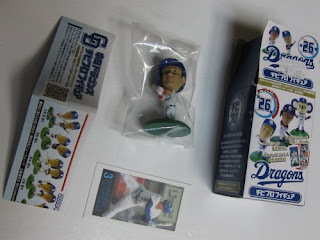 This is the Sho Nakata figurine with accompanying paraphernalia from the Fighters set: 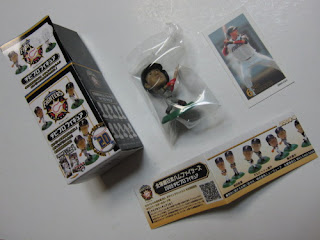 Here's the front and back of a couple of the cards: 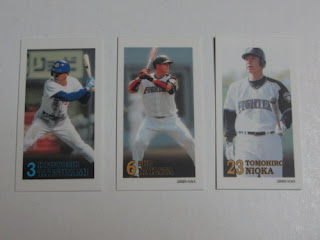 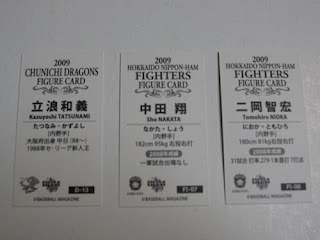 These resemble the Corinthian "Headliner" figurines produced for MLB from the mid-90's until 2006 or so. Like the last couple years of the MLB ones, you can't tell who the figurine is for until you open the box.

(Thanks to Deanna for the pictures and the information!)

- The latest Prestige Collectibles auction started the Thursday and runs until July 21.
Posted by NPB Card Guy at 5:32 PM 3 comments:

Card Of The Week July 5

Last week, the results of the All Star ballots were announced and Atsunori Inaba of the Hokkaido Nippon Ham Fighters was the top vote-getter. Here's his card from the 2007 BBM All Star set (#A30): 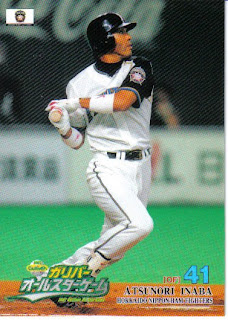