Card Of The Week September 27

The January 2009 edition of Sports Card Magazine featured three bonus cards for the 2009 BBM Rookie Edition set.  Two of these featured pictures Kazuhiro Kiyohara and Sadaharu Oh from their rookie seasons of 1986 and 1959 respectively.  These cards were essentially promo cards from the "single-player" sets BBM put out commemorating their retirements following the 2008 season - the backs of the cards were ads for the sets.

The third card, however, featured a player who was not taken in the NPB draft the previous fall, but the Kansai Independent Baseball League.  In the seventh round of the league's draft, the Kobe 9 Cruse took a 16 year old female knuckleball pitcher from Kawasaki-kita Senior High School named Eri Yoshida:


Yoshida has gone on to play for a couple independent teams in the US.  She has been a member of the Ishikawa Million Stars in the BC Challenge league for the past three seasons (if this team sounds familiar, it's the team Julio Franco is managing).  She's had additional baseball cards both in the US and in Japan (she's been in at least one of BBM's Real Venus sets) but this was the first.
Posted by NPB Card Guy at 9:00 PM No comments:

Very sad news out of Tokyo today - Hanshin Tigers GM Katsuhiro Nakamura was found dead of an apparent heart attack in his hotel room.  He was 66 years old.

Nakamura was drafted by the Tigers in the second round of the fall 1971 draft out of Waseda University.  He spent 11 seasons with the Tigers from 1972 to 1982.  He managed the Tigers farm team from 1983 to 1987 and was a coach with the ichi-gun team in 1988.  After a year spent as a TV commentator, he returned to the Tigers in 1990 as their manager.  He managed the team for several seasons before he was replaced in the middle of the 1995 season by Taira Fujita, only finishing once over .500 and in the first division (1992).  After another couple seasons doing TV work, he became GM of the then Orix Blue Wave in 2003.  He ended up taking over as manager of the now Orix Buffaloes in 2006 following the death of Akira Ohgi before stepping aside for Terry Collins after the season.  He remained with Orix's front office until 2010, after which he again returned to television.  In August of 2012 he was named Hanshin's GM, the first to ever hold that position for the team.

Hall Of Famer Yogi Berra passed away this week at the age of 90.  You might be surprised to learn that Yogi Berra had some Japanese baseball cards.  Berra never played for a Japanese team, but he participated in three tours of Japan - the 1953 All Star tour, the 1955 Yankees tour and the 1974 Mets tour.

Rob Fitts (on his blog that is no longer officially on-line but can be seen at the Wayback Machine Internet Archive) listed six Japanese cards of Berra.  Three of these are from 1953 - probably produced as a promotion for the MLB tour.  I don't have any of these cards but they were sold in recent years by Prestige Collectibles Auctions and I've swiped their images here:


The photos look like they were all taken at Yankee Stadium which makes sense - if you wanted to be selling the cards during the tour you probably couldn't use pictures taken DURING the tour.

Rob mentions two other cards from the 1950's.  I think the post I've linked to showed one of them but unfortunately the image did not get archived with the blog post.  The other is a "colorful menko card".  I believe that both of these cards are uncatalogued.

The final Japanese Berra card is the only one that I actually own.  A US serviceman named Ed Broder did a number of home brew Japanese sets in the mid 1970's (Broder's son Rob became famous/infamous for producing unlicensed MLB cards in the late 1980's).  One of his sets commemorates the Mets tour of Japan in late 1974 and includes this card of Berra: 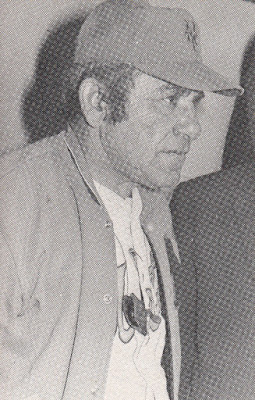 It's hard to tell but this photo (as well as those in the rest of the set) were actually taken during the tour in Japan.
Posted by NPB Card Guy at 8:15 PM No comments:

I got a tweet from reader David Saba last week asking me about an odd card he had picked up on Ebay.  It's a 1991 BBM card of Shigetoshi Hasegawa with a gold stamp that says "1 of 1 - The National Sports Collectors Convention - Kids Free": 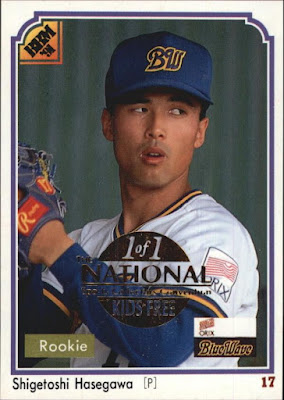 I had never seen anything like this before.  I asked Larry Fuhrmann about it, figuring if anyone would know if BBM had ever done some sort of promotional item for The National, it would be him.  But Larry's never seen these before either.

I have to say that it doesn't look like the kind of promotional item BBM does in Japan.  Their items usually are new cards with the same picture but different colored graphics - like these Lions promos from 2013.  Or the promos in SCM or Weekly Baseball.  David said there's nothing stamped on the back of the card.

I did a little looking around on Ebay and I found a bunch of 1991 cards with the same stamp being sold by Burbank Sportscards.  David mentioned that he'd seen some being sold by other sellers but I haven't been able to find any.  Burbank Sportscards is currently listing 353 cards and there was only 399 in the original set so assuming there really are only 1 of each of these (and taking into account the Hasegawa card that David bought) that's only leaving 45 cards unaccounted for.  Obviously it doesn't look like these actually got distributed at the National if one seller has possession of 88% of the cards.

My gut feeling is that someone other than BBM picked up a 1991 factory set and thought it would be a good idea to stamp each of them as a promotion for The National.  Since there's no sponsor indicated, it may have been the promoters of the show itself who did it.  I've sent a message to Burbank Sportscards asking for details and I'll update this post with their response if I get one.

Any information anyone has on this would be appreciated.

UPDATE: I got the following response from Burbank Sportscards about the cards:


Thank you for your inquiry. Unfortunately, I don't know when exactly they were given out, but I do know it was sometime in the mid 2000's. As for the company, I believe it was a company that sponsored the shows.

Card Of The Week September 20 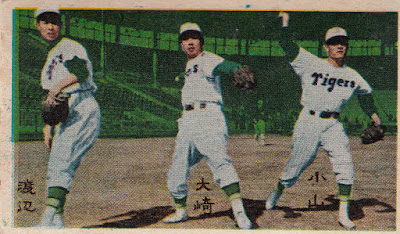 I received a box of unopened packs of the latest offering from Duael Entertainment - the Super Star Baseball Season 2 set featuring players from the Korean Baseball Organization (KBO).

Like the Season 1 set earlier this year, the box contains 20 packs.  Each pack contains six cards - four "regular" cards, one short print or special card and one sticker.

The set has 171 possible cards plus 100 stickers.  There are three varieties of "special cards" - 70 "Super Auto" cards (autographed cards), 10 "Super Patch" cards (patch cards obviously) and 30 "Super Piece" cards (jersey cards).  All of these cards are serially numbered.  There are four varieties of short print cards - 10 "Superstar" cards, 20 "Big Star" cards and 30 "All Star" cards.  The "All Star" cards have a serially numbered parallel version (with a "wave pattern hologram" finish).  There is also a serially numbered card (to 400) dedicated to Seung Yuop Lee's 400th career home run.  Finally there are 50 cards (five per team) in the base set.

Here's the breakdown of the 100 cards that I got in the box:
80 base set cards - 41 singles plus 39 duplicates
3 Superstar cards
5 Big Star cards
12 All Star cards (including one parallel version)
20 stickers - 17 singles plus three duplicates

I was pretty disappointed with only getting 41 of the 50 base set cards in the box.  What's really odd is the distribution of the cards that I'm missing - I didn't get any of the five Doosan cards.

I was also irritated that when opening one of the packs by tearing on the notch in the wrapper provided by the company, I ripped one of the base cards.  Luckily (although not surprisingly) it was a card I had multiple copies of.  I got a lot more careful opening the packs after that.

Like the short print cards, the base set uses the same design as the Season 1 base set:

The stickers are blank backed and unnumbered.  They feature an inner square that is intended to be separated from the "wooden" frame and stuck somewhere.  My disappointment with the box continued when I ended up with three doubles in the 20 stickers in the box. 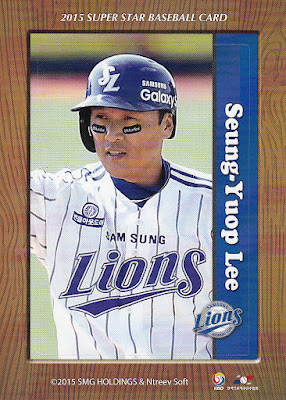 The only cards with the player's name in English are the "Big Star" cards and the stickers.  I determined the names of the players from the official KBO website.  I do not know if there is an English language checklist on-line anywhere.  I don't see one in any of the usual places.  I may try to put one together myself.

Once again there are no foreign players in the set.

I pretty much feel the same way towards this set as I did for the Season 1 set - it's interesting but I'm not invested into the KBO enough that I'm willing to make the effort in time or money to pick up any more of the short printed cards (let along the memorabilia ones).  I'd like to get the nine cards I need to complete the base set and that'll be it.  I do think this is an improvement over the Season 1 set however.
Posted by NPB Card Guy at 10:47 PM 4 comments:

A Quarter Century Of Tanishige

As you probably already know, BBM is celebrating their 25th year of doing baseball cards this year.  Did you know that there's one player who has appeared in every flagship set BBM has done in those 25 years - the 11 "regular" sets between 1991 and 2001 and the 28 1st and 2nd Version sets between 2002 and the present?  That player is Motonobu Tanishige.

Tanishige was drafted out of high school by the then Yokohama Taiyo Whales in the fall of 1988.  He had already spent parts of two seasons with the ichi-gun Whales before BBM published its first set in 1991.  He left Yokohama as a free agent following the 2001 season and landed with the Chunichi Dragons where he's been ever since.  He became player-manager last season and broke Katsuya Nomura's record for most games played in in Japan back in early August.  This is likely his final season as a player so his streak will be broken next season.

With a little help from Ryan I've managed to pick up all 39 of Tanishige's flagship cards: