I picked up a box of the most recent KBO set from Duael Entertainment - 2015 Super Star Baseball Season One - from a seller on Ebay recently and the box was delivered today.


The box contained 20 packs.  Each pack contained five cards - down one from last year's first two sets.  Four of the five cards in the pack were base cards while the other was one of the short printed cards.

The set itself has 230 possible cards - 200 of these are either short prints or serially numbered cards.  There are 10 "Gold Coin" cards (one for each of the 10 teams in the KBO) that are 1 of 1 cards, 20 jersey cards (two for each team) that are serially numbered to either 5 or 40 (don't know if there are parallels with a different count or just not every card has the same count) and 70 autographed cards (7 per team) that are serially numbered to 10.  Of the short print cards, there are 10 "Superstar" cards, 20 "Big Star" cards and 50 "All Star" cards (all are divided equally between the 10 teams).  There also appears to be a serially numbered parallel for the "All Star" cards - I think they are limited to 100.  There are also 20 "Rookie" cards that I believe are short printed - there can be at most one per pack vs four base set cards which I think pretty much is the definition of short printed.  You can do the subtraction yourself to see that there's only 30 cards in the actual base set (three per team).

Here's the breakdown of the 100 cards that I got in the box:
80 base set cards - all 30 singles plus 50 duplicates
2 Superstar cards
4 Big Star cards
10 All Star cards
4 Rookie cards

Here's examples of each of the short printed cards:

Like the Season Two and Three sets last year, the "Big Star" cards are the only ones to have the player's name in English on it.

Half the rookie cards I got show the player in what I assume is either their high school or college uniform.  I would really like to see BBM adopt this for their Rookie Edition sets.

Unlike last year's sets which pretty much had identical backs, this year's cards have backs that have stats and biographical information for the player.  The stats only cover the last five years that the player has spent in the KBO - so for example Seung-Yeop Lee's card shows stats for 2002-03 and 2012-14 but not the years he spent in Japan from 2004-2011:

The short printed cards have similar backs to the base set cards.  The backs of the Rookie cards are a little different.

While last year's cards appeared to be for a collectible card game, I don't think this year's set is intended for that kind of use.  There's none of the game related numbers on the cards this time around.

I'm not sure what to make of this set.  While I think it's fairly attractive, the ridiculous ratio of rare cards to base cards (even leaving out the memorabilia/autograph/coin cards, there's still 100 short printed cards to go with the 30 cards in the base set.  I don't think I'm a big enough fan of the KBO to be terribly interested in making the effort in time and money to attempt to pick up much more of this set.  Like I've done with some of the sets from last year, if I get a chance to pick up some of the short prints cheap on Ebay, I will, otherwise I'm going to be happy with what I've got here.

Note - I used the checklist that Jason put together over at The Trading Card Database to figure out which cards I had.

UPDATE:  Forgot to mention that each pack had one of these ad/promo thingys in it.  They have a unique code that can be redeemed or used for something: 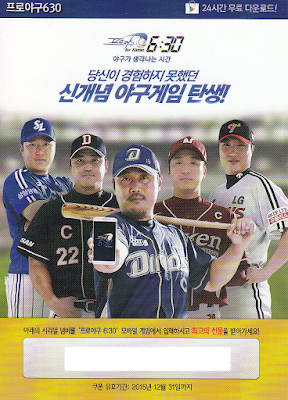 I can do without complex full sets. And a 30-card base set with 100 short prints and another 100 impossible short prints. This feels like 2008 Stadium Club all over again.

This is the only KBO set, and while I understand that there are multiple series, the base set should be just that: a comprehensive base set containing all the players (or at least the regulars) like BBM's 1st/2nd Versions. Then, they can toss in the short-printed inserts and hits as just that - insert sets, not numbered with the regular set.

To the manufacturers of this set and others, know this: short printed base set cards seriously turn me off of most sets, especially when they're "super" short prints.

I could also do without 8 digit card numbers.

The card makers seem to be experimenting with different formats. The one I've liked the most was Season Two last year which had a 126 card base set with a bunch of parallels. So we'll see what happens next time.

I forgot to mention that once again there are no foreign players in the set.

I havent added the scans to the 2015 Season 1 set yet, and Im not sure how complete I am after buying three boxes with many duplicates, but I will check. This KBO card/pack distribution is ridiculous.

The Blue Edition has 4 cards per pack and no trivial 5th "game piece" card. I am happy to report I did hit a 2/30 이승엽 (Lee Seung Yeop) coin card.
https://youtu.be/p2pGFi4yFi0

Thanks for the information and the video. That coin card is pretty cool.

2015 Season Two is out but I haven't seen much information about it yet.