Card Of The Week December 28

Koji Mitsui of the Lions has asked to be posted, but he failed to draw any bids. Here's his rookie card from the 2001 Upper Deck set (# 21): 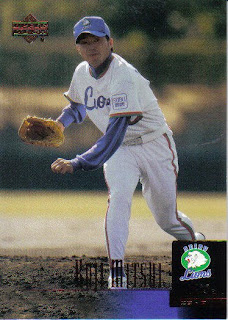 2009 marks the 20th Anniversary of the sale of the Hankyu Braves to the Orix Group. The team was called the Orix Braves for the next two years, then the Orix Blue Wave until after the 2004 season, when the Blue Wave and the Osaka Kintetsu Buffaloes merged and became the Orix Buffaloes. BBM this week announced a memorial set celebrating the Hankyu Braves.

The set is a 50 card box set that will be in the stores January 29. The set includes 48 player cards plus 2 random memorabilia cards so it's a bit on the expensive side - 5250 yen (~$58). The players shown on the web site all played in the 1970's-80's, but since Hankyu had owned the team since 1936, it's probably safe to assume that the set will have earlier players as well.

I suspect that like last year's Lions sets, this will be followed next spring with a pack based 20th Anniversary Orix set, featuring some combination of OB and current players.
Posted by NPB Card Guy at 8:57 AM No comments:

BBM has announced that they will be producing a "Thank you Sadaharu Oh" memorial set. This box set will contain 89 "regular" cards plus 1 memorabilia card. The set will be in the stores on January 22 and the SRP is 3150 yen (~$35).
Posted by NPB Card Guy at 8:38 PM 1 comment:

The Cardinals have signed Katsuhiko Maekawa to a minor league deal. He had signed a deal with the Nats last year, but didn't play due to visa issues. I did a post on his cards back when he signed with Washington and I don't think there's really any additional information that I've learned about his cards since then (other than he does have Calbee cards in at least the 2000, 2001 and 2002 sets). But just for fun, here's another card of him (2006 Konami Baseball Heroes 2 White Edition #B06W052): 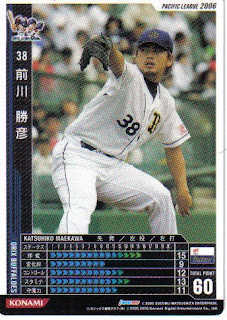 Former Baystars manager Daisuke Yamashita was hired by the Dodgers to be an infield coach for their Arizona League minor league team. Here's his 1982 Calbee card (#132): 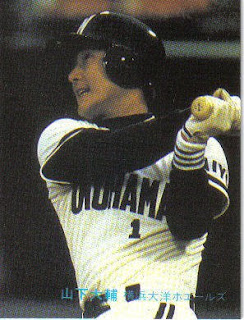 I found these on Ebay today: 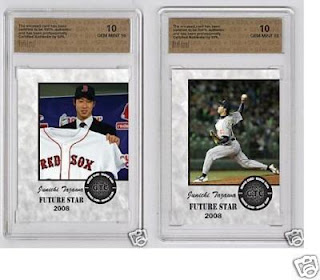 I don't think they're licensed or worth the card stock they're printed on, but your mileage may vary.

But you have to admit that I nailed that prediction.

Not that it was that hard to predict.
Posted by NPB Card Guy at 8:55 PM 2 comments:

Card Of The Week December 14

Since there's been a bunch of stuff in the news lately about this, I thought I'd show this card of Ayumi Kataoka (2007 BBM 2nd Version #737). Kataoka is an infielder for the Ibraki Golden Golds, who I think are some sort of semi-pro celebrity team (I'm looking forward to the next installments of Deanna Rubin's very informative primer on all levels of Japanese baseball and hoping that she'll explain what this team really is). Regardless of the level of baseball, it appears that Kataoka is the only other female player in professional baseball in Japan. (As always, please correct me if I'm wrong.) 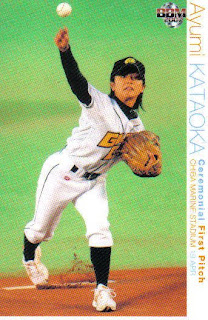 - BBM has announced this year's Nippon Series set. The 60 card box set apparently was released last Saturday (12/6) but only appeared on their website today. As is the case with all the Nippon Series sets, the set contains 52 cards for the players who actually played in the series, cards for each team's manager, three cards for the "Outstanding Player" award winners, one card each for the "Fighting Spirit" and "Series MVP" award winners and a card for the champion Lions. I like the look of the cards this year, especially compared to this year's All Star set.

- NPB Tracker has posted an interesting interview with former Nippon Ham and Hiroshima pitcher Eric Schullstrom who is currently a scout for the Carp. This gives me an excuse to show a card of Schullstrom: 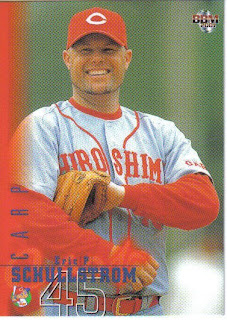 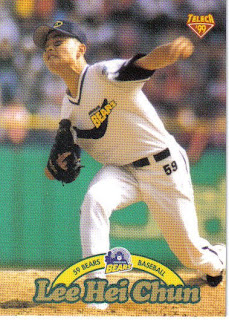 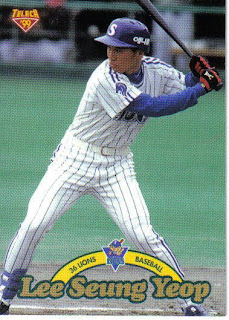 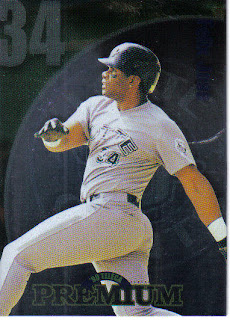 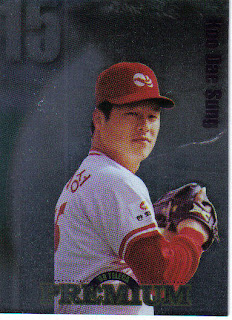 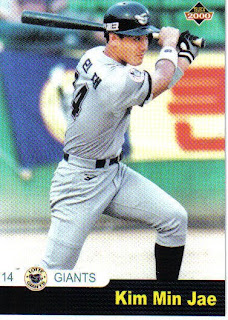 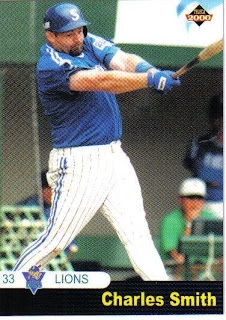 Bubba Smith is a legend in minor league baseball and it was because of him that I ended up getting some Korean cards in the first place.
Posted by NPB Card Guy at 5:30 PM 14 comments:

For no particular reason: 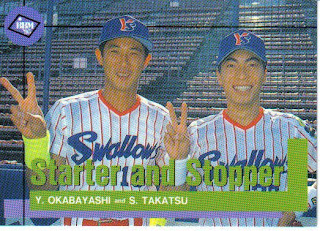 Update - I forgot to mention that it will be in stores on December 11th.
Posted by NPB Card Guy at 8:35 PM No comments: