I recently learned about an error that BBM made in the 1996 set that they corrected later in the year.  Card #545 features Hiromitsu Ochiai.  The card is in the short printed "95 Record Makers" subset and celebrates Ochiai getting his 2000th career hit.  Here's the error card along with the corrected card: 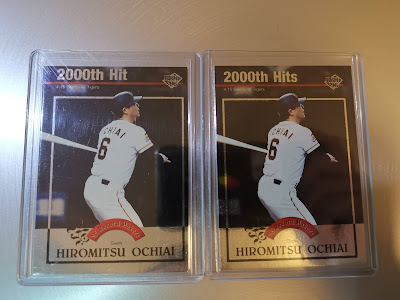 I was offered the pair of cards last week by the seller in Taiwan that I had bought the rare Late Series 1995 BBM cards from.  I ultimately decided against buying the pair of cards although we did eventually make a deal for the corrected version and a couple other cards.

I really would like to find a definitive list of variations on BBM cards.  I put together one a few years back based on SCM's listings but this is the second time I've come across a new variation - the first one I found about a year ago when I was going through a large lot of 1995 BBM cards.

UPDATE - Fuji pointed out in the comments that I probably have this backward - my brain had skipped over the "th" so the error card is probably the one on the right.

Card Of The Week April 25

Today Samsung Lions reliever Oh Seung-hwan became the first pitcher in KBO history to reach 300 saves.  He had notched 277 before departing the KBO for the Hanshin Tigers in 2014 and got the remaining 23 since returning to Korea last year.  His career total is 422 saves when you add in the 80 he got with Hanshin in 2014-15 and the 42 he got in MLB with the Cardinals, Blue Jays and Rockies from 2016 to 2019. 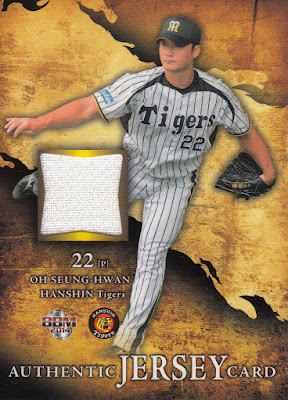 The final retirement post (for now anyway) is for a player who wasn't officially retired until after I finally started doing the post-2020 retirement posts two months ago.  Longtime Baystars infielder Takehiro Ishikawa was released by DeNA last fall but was hoping to catch on with another team.  After not getting any offers all winter he finally announced his retirement on March 21st.

Ishikawa attended Yokohama High School and was taken by the hometown team in the sixth round of the 2004 draft.  He spent most of his first three seasons on the farm team but by 2009 he had established himself as the team's starting shortstop, a role he kept for about three seasons.  He had what was probably his best season in 2010, hitting .294 with 36 steals (second in the Central League) in 131 games.  He became the DeNA Baystars first team captain in 2012 and moved over to second base.

Ishikawa never hit much and his lack of offense started cutting into his playing time with the top team after 2014.  He relinquished his captaincy to Yoshitomo Tsutsugoh in 2015.  He spent all of 2020 with the farm team before he and the team parted ways at the end of the year.  He's now a commentator on Baystars games on TV.

Longtime catcher for the Hawks and Buffaloes Katsuki Yamazaki announced his retirement at the end of last season.  Yamazaki was the fourth round pick of the Fukuoka Daiei Hawks out of Hōtoku Gakuen High School.  He spent his first four and a half season on the Hawks' farm team before finally making his ichi-gun debut in August of 2005 for the now Softbank Hawks.
He got his big break when the Hawks starting catcher, Kenji Johjima, departed for Seattle before the 2006 season.  He pretty much was the Hawks starting catcher for the next two and half years before Softbank finally despaired of Yamazaki's poor hitting and replaced him with Hiroaki Takaya.  He settled into more of a backup role for the remainder of his career.  He left the Hawks as a free agent after the 2013 season and signed with the Orix Buffaloes in his native Kansai.  He's been with the Buffaloes ever since.
His rookie card was #407 from BBM's 2001 set.  His first Calbee card wasn't until 2007 (#243 from Series Three).  Here's some of his cards:

Sad news announced today - former MLB and NPB player Adrian Garrett passed away from pneumonia at age 78.  Garrett had spent three years with the Hiroshima Toyo Carp from 1977 to 1979 and helped the team win their first Nippon Series championship in 1979.

He hit 35 home runs in his first season with the Carp and then had his best season in 1978.  He homered in each of his first four games and had 15 in the month of April, tying an NPB record.  He also hit three in one of the All Star games that year.  He finished the season with 40 homers, making him the first foreign player for the Carp to hit 40 or more in a season.  His home runs (along with Koji Yamamoto's 44, Jim Lyttle's 33 and Sachio Kinugasa's 30) helped the Carp become the first NPB team ever to have more than 200 home runs in a season.

His brother Wayne also played in MLB and NPB, spending two seasons with the Chunichi Dragons in 1979-80.

Garrett had a handful of Calbee and Takara cards during his Japanese career along with some more obscure issues.  He made a couple appearances in BBM's OB sets over the past 12 years or so and was also featured in the recent Japan Retired Foreign Player Association set from Epoch.  Here's the cards I have of him:

Koji Aoyama, longtime bullpen mainstay for the Tohoku Rakuten Golden Eagles, announced his retirement back in November.  Aoyama was the third round pick of the Eagles in the 2005 University/industrial league draft out of Hachinohe Gakuin University.  He made the Eagles Opening Day roster in 2006 and spent most of the season working in middle relief.  The team moved him into the starting rotation at the beginning of 2007 but moved him back into the bullpen after a couple months.  He worked out of the bullpen for pretty much the rest of his career.

He had a couple brief stints as closer in 2008 and 2009 but he took over the role from Darrell Rasner in May of 2012 and kept it for the remainder of the season.  He had 22 saves that year which was a new team record (and has since been surpassed by Yuki Matsui).  He made the All Star team for the first time.  He started out the 2013 season as the closer and notched 11 saves before losing the role to Rasner in the middle of the season.  He made the All Star team again but suffered an injury late in the season that prevented him from playing in the Nippon Series that year, the only time the Eagles have ever played for the championship.

He spent the remainder of his career as a set up man and was a work horse for the team, appearing in 50 games or more four times in the five years between 2015 and 2019.   He only got into 11 games with the ichi-gun team in 2020 and Rakuten released him at the end of the season.  He's been working as a coach with the Rakuten Eagles Baseball Academy as well as doing some commentary on game broadcasts (radio, I think). 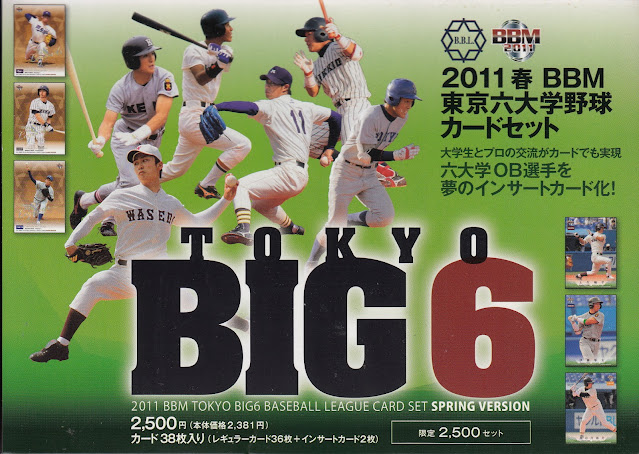 Ten years ago this month BBM released yet another set for the Tokyo Big Six collegiate league.  The 2011 BBM Tokyo Big Six Spring Version set was their seventh for the league and their eighth overall collegiate set.  Like the previous several sets it contained a 36 card base set that included six team cards along with 30 player cards (five per team).

I was somewhat surprised when this set was published as I wasn't expecting it to happen.  I'm still convinced that BBM only worked out a deal to do cards with the Tokyo Big Six so that they could have cards of Yuki Saitoh (if you don't know why Yuki Saitoh was a big deal, I go into it here).  Saitoh was drafted by the Fighters in the fall of 2010 so I frankly didn't expect BBM to continue to publish these sets.

And I wasn't the only one.  Deanna Rubin talked to some of the players on one of the teams during the 2010-11 offseason and they expressed disappointment that since Saitoh was no longer playing in the league there wouldn't be any more Tokyo Big Six merchandise like calendars or baseball card sets.

It turned out that we were wrong (at least about the card sets - Deanna says there hasn't been a Tokyo Big Six calendar since 2010) and BBM continued publishing sets for the league for another three years after Saitoh went pro.  Which doesn't mean that they didn't start doing them because of him - it may be that the league had insisted on a six year deal, even if Saitoh was only going to be around for half of them.  BBM would ultimately do eleven collegiate sets between 2008 and 2013* and Saitoh would be featured in six of them.

*I'm not including in this count the two sets BBM did in 2011 for former players from both the Tohto and Tokyo Big Six leagues (which of course included Saitoh).

OK, so not that I've completely beaten to death that Saitoh was not in this set (only the second collegiate set BBM had done that didn't include him), who is in it?  Eight of the 30 players in the set went on to play in NPB and all eight of them had appeared in previous Tokyo Big Six sets.  SixFive of the players are still active in the league while a seventh (Shota Sugiyama) played for the independent Ryukyu Blue Oceans last year two of the others are still playing for independent teams.  Here's the list:

Here's each of their cards from the set along with a card of them from their time in NPB:

Card Of The Week April 18

Yesterday was a big day in NPB with Masahiro Tanaka making his first appearance in a meaningful game in Japan since Game Seven of the 2013 Nippon Series and Carter Stewart Jr, made his NPB debut.  Stewart did better than Tanaka - he pitched a scoreless ninth inning against the Lions, facing four batters, striking out two and walking one.  Tanaka on the other hand went five innings against the Fighters, striking out five, walking one and giving up only four hits.  This doesn't sound bad until you realize that two of those hits were home runs - a two run shot by Sho Nakata in the first* and a solo shot by Kazunari Ishii in the second.  Those three runs were enough to seal the defeat for Tanaka which I believe was his first regular season loss in NPB since August 19th, 2012.

*If Sho Nakata hitting a home run off of Tanaka in the first inning of his first start sounds familiar, it's because it also happened in Tanaka's first spring training start back in February. 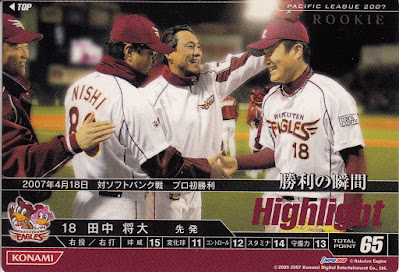