Saitama Astraia infielder Yuki Kawabata announced her retirement at the end of December.  Kawabata played softball in high school and after graduation played for Shionogi Pharmaceutical in what I'm guessing is basically corporate league women's softball.  She tried out for the Japan Women's Baseball League (then called the GPBL - Girl's Professional Baseball League) when they started up in 2009 and joined the Kyoto Asto Dreams.  When the league reorganized (and renamed itself) after the 2012 season she joined the East Astraia team that was renamed Saitama Astraia in 2015.  She's pretty much been the face of women's professional baseball in Japan for the past 10 years and one of the best players in the league.  She led the league in batting three times, hitting .393 in 2010, .406 in 2011 and .417 in 2013.  She also led the league in OBP three times with a value of .497 in 2011, .537 in 2013 and .509 in 2017.  She was league MVP once (in 2013), won a Golden Glove Award once (in 2017) and was named to the Best 9 team three times (2011, 2013 and 2017).  She did not actually play in the JWBL last season (although she's in Epoch's card set for the league) but she did play in the Women's Baseball World Cup for Japan last August.

I have a number of cards of her, most of which I've shown before (a couple as recently as earlier this month) but I thought I'd show all of them here.  Ryan has at least one other card of hers and I suspect there are others in some of the other JWBL/GPBL sets he's come across.


That last card shows her with her brother, Shingo Kawabata of the Swallows.
Posted by NPB Card Guy at 9:16 PM 1 comment:

After a two year absence the Shikoku Island League All Stars will again be taking part in the independent Can-Am League this summer.  They will play 18 games (3 each against the six teams in the league) starting on June 14th against the Sussex County and finishing up on July 4th in Ottawa.

Hawks and Marines pitcher Kenji Ohtonari called it quits at the end of the 2018 season.  Ohtonari was the top pick of the Hawks in the College/Corporate League portion of the 2006 NPB draft out of Kinki University.  He was not their first round pick but something that by 2006 was called the "preferred entry frame" but I suspect was similar to the "freedom acquisition frame" used by the Lions to sign Taketoshi Gotoh four years earlier.  He made his debut with the top team in mid-season 2007 and was a mainstay of the rotation by the following year.  He missed most of the 2011 season due to illness but bounced back in 2012 with what was probably his best season of his career, going 12-8 with a 2.03 ERA.  His playing time was severely diminished after that, only appearing in 29 games with the ichi-gun Hawks over the next five seasons (including only single games in each of 2016 & 17).  Injuries were partly to blame - he developed lower back issues in 2013 and had an elbow injury in 2015.  Softbank released him following the 2017 season and after participating in the 12 team tryout that December he eventually signed with Lotte in mid-February of this year.  He really only made one start for the ichi-gun Marines and he got hammered in it - his former team the hawks lit him up for seven runs in 1 2/3 innings on seven hits including a pair of two run home runs by Yuki Yanagita and Alfredo Despaigne.  He had a second start on October 3rd against the Hawks again which was really just his retirement game - he only faced one batter, giving up a hit to Seiji Uebayashi.  Unfortunately due to Tomohito Sakai's pitching in relief, Ohtonari was ultimately charged with an unearned run and the loss in a game the Marines dropped 10-2.  So his numbers for the year ended up being 0-2 with a 37.80 ERA.  He will be one of the pitching coaches for the Marines farm team next season.

Ohtonari made the All Star team in 2012 and pitched for the Japanese National Team in the 2013 World Baseball Classic.  Despite Softbank playing in (and winning) four Nippon Series during his time with them, he only appeared in one of them - he started and won Game 3 of the 2014 Series against the Hanshin Tigers.

A few months back I did a Card Of The Week post for Tigers pitcher Joichiro Maki's 2018 BBM 1st Version card.  I was amused that Maki was shown running as I had always read that pitchers generally hate to run.  When I was going through the BBM team sets that I had gotten from Ryan a few weeks back I noticed that Maki's card from the Tigers team set from last year (#T32) also showed him running: 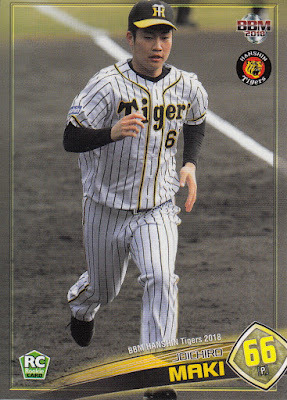 Like on the 1st Version card he's not wearing a batting helmet or a glove so this is obviously not from a game.  There's nothing I see on his Japanese Wikipedia page that would make me think he was a runner in his spare time and none of his Epoch cards (one card in the NPB set and three in the Tigers Rookies & Stars set) show him running.  I have no idea why BBM choose two photos of him running for their only cards of him this year (other than his Rookie Edition card).
Posted by NPB Card Guy at 5:16 PM No comments:

Yet another player who retired at the end of the 2018 season was Baystars pinch hitter Taketoshi Gotoh.  Gotoh had been a collegiate star at Hosei University.  He won the Tokyo Big Six University League Triple Crown during the 2000 spring season (I think) and the batting crown during the fall season that year.  He played for the collegiate National team in both the 2001 Baseball World Cup and the 2002 World University Championship.  He was the Lions top draft pick in the 2002 NPB draft.  He wasn't their first round pick but he was taken in something called the "Freedom Acquisition Frame" which I think was some way that a team and a player could come to a pre-draft agreement.  The Lions signed two players this way in the 2002 draft (the other was Suichiro Osada) but Gotoh was the first of the two.

There were high expectations for Gotoh during his rookie year of 2003 and he played in 101 games, hitting .262 with 11 home runs.  His defense apparently was atrocious however and he got banished to the farm team for most of the remainder of his career.  2003 was the only season in which he played in over 100 games at the ichi-gun level.  He was mostly used as a pinch hitter - the second most games he got into in a single season was 70 in 2015 - he only had 76 at bats and only played in the field in four games.

He was traded from the Lions to the Baystars in November of 2011 for Shingo Takeyama.  He started using the registered name of "G Taketoshi Gotoh" in 2015 - I'm not really understanding the Google translation of his Japanese Wikipedia page but I think he somehow picked up the nickname "Gomez" and the extra "G" has something to do with that.  He'll be one of the Eagles ni-gun hitting coaches in 2019.

He appeared in one Nippon Series - 2008 with the Lions.

Former Hawks pitcher Tadashi Settsu announced his retirement late last month.  He'd been released by Softbank at the end of last season and had hoped to sign on with another team but no one made him an offer.  Settsu was the Hawks's fifth pick in the 2008 draft of the roster of JR East Tohoku of the industrial leagues.  He immediately joined the ichi-gun team's bullpen and went 5-2 with an ERA of 1.47 in 70 games in middle relief.  He led the league in "Hold Points" that season, made the All Star team and was named Rookie Of The Year.  He led the league in "Hold Points" again in 2010 and then the Hawks moved him into the starting rotation for 2011.  He made the All Star team again in 2011 and then had his best season in 2012, going 17-5 with a 1.91 ERA, leading the Pacific League in wins and winning the Sawamura Award.  His numbers began to decline after that with his ERA topping 3 runs each of the next three seasons.  After 2015 his appearances with the top team severely dropped off as he only made 7 starts in each of his last three seasons.  I don't think there was an injury involved, just a lack of effectiveness.

Settsu pitched for the Hawks in four of the five Nippon Series that they played in (and won) during his career - 2011, 2014, 2015 and 2017 - he was left off the Series roster this autumn.  He pitched for the Japanese National Team in the 2013 World Baseball Classic.

Fighters outfielder Kenji Yano retired at the end of last season.  Yano was a sixth round pick of the Giants out of Kokugakuin University in the 2002 NPB draft.  He was a regular outfielder for the Giants in 2006 but moved into a backup/pinch hitter role for 2007.  Injuries cost him most of 2008-09 as he only got into 9 games with the ichi-gun team. Once healthy again in 2010 he resumed his backup role which is pretty much how he spent the remainder of his career.  He set the Giants record for pinch hits in 2013 with 19.  He was traded to the Fighters along with Hideki Sunaga midway through the 2015 season for Toshiyuki Yanuki and Atsushi Kita.

I used his Baseball-Reference Bullpen article as one of my sources for this post.

And I'm still amused I came across of jersey of his in London last September...
Posted by NPB Card Guy at 9:13 PM No comments:

Getting back to the retirement posts...

Pitcher Toshiya Sugiuchi of the Giants announced his retirement back in mid-September.  Sugiuchi originally was from Kyushu - he was born in Onojo, went to high school in Kagoshima and played in the corporate leagues for Mitsubishi Heavy Industries Nagaski - so it was fitting that he was the third round pick of the Fukuoka Daiei Hawks in the 2001 NPB draft.  By 2003 he was in the Hawks starting rotation and he had his best season in 2005 when he went 18-4 with a 2.11 ERA and 218 strikeouts in 196.2 innings.  He left the Hawks for the Giants as a free agent following the 2011 season.  He threw a no-hitter against the Eagles in 2012.  He injured his hip during the 2015 season and despite having surgery has never been able to make it back to the ichi-gun team.  He has been named as one of the pitching coaches for the Giants farm team for 2019.

Because he was still an amateur when he played in the 2000 Olympics, Sugiuchi is one of the rare players to have a "pre-rookie" card in Japan as he had a card in the 2000 Upper Deck Sydney Olympic Games Japanese Team Cards set.  His first BBM and Calbee cards were both from 2002 - card #235 in BBM's 1st Version set and card #N-14 in the "New Faces" subset from Calbee.