Back when I used to collect MLB cards in the late 90's I usually bought the Topps or Fleer set every year but I'd get frustrated that there were players who weren't included in the sets.  I used to augment my collection with cards of missing players from Upper Deck or Pacific sets.  I have the same desire to get cards of every NPB player I can which is one of the reasons I started picking up all the BBM "comprehensive" team sets a few years back.  But those sets only include players on each team's 70 man roster - what about the ikusei or developmental players?

Epoch this past year issued comprehensive team sets (called "Rookies & Stars") for seven of the 12 NPB teams - the Carp, Lions, Swallows, Baystars, Dragons, Buffaloes and Tigers.  They included ikusei players with five of those teams - the Lions, Baystars, Dragons, Buffaloes and Tigers although the only teams they included ALL of ikusei players for were the Lions (2 players) and Baystars (6 players).  I asked Ryan to pick up the cards of these players for all the teams except the Lions since I intended to get the complete Lions set (and I still do).  Here's the other cards:

The couple cards with an "a" in their card number actually have multiple versions in the set they're from.

By the way Tamura was registered to the Baystars 70 man roster at the end of July and pitched in one game for the ichi-gun team.  The rest of the players remain developmental players.

The Dragons and Baystars team sets also included cards for the farm team manager so I asked Ryan to pick those up for me as well:


Speaking of Epoch cards, Ryan included a one card promo pack for their flagship set from last year called "NPB":

The pack contained a promo card of Ken Togame of the Lions.  The card is identical to the Togame's card in the set except for the "Promotion Card" text on the front: 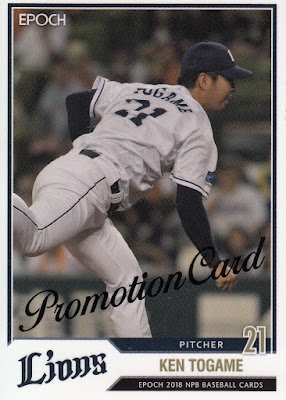