I talked a little about the Epoch One cards the other day in my wrap up of 2018 for Epoch but I wanted to talk a little more in detail about the cards, especially since I got 10 of them in the package I got from Ryan the other day.

Epoch One is essentially Epoch's version of Topps Now.  Epoch makes cards available on their website for 500 yen apiece for a short period of time (seems to be around three days which is longer than the 24 hours Topps Now cards are available).  The print run for each card is determined by the number of orders of it.  The cards commemorate notable events during the regular season, the Climax Series, the Nippon Series and the NPB draft (held in October).

I have 11 of these cards - the 10 I asked Ryan to pick up for me plus another one I got from someone on Amazon.

I don't remember what all of these commemorate but I know that I have the cards for Kioymiya's first hit, Yamaguchi and Sugano's no-hitters and a sayanora home run for Kimura.  I was aiming at getting at least one card per team and I also wanted to pick up cards showing alternate uniforms for when I get around to updating my uniform posts.

Here's what one of the card backs look like: 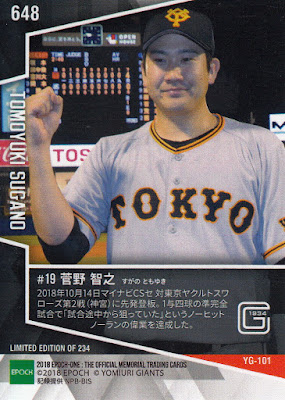 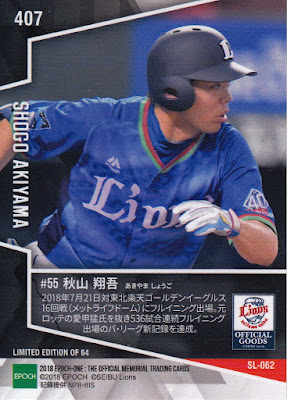 As with other things Epoch did in 2018 I'll be curious to see if they continue doing Epoch One cards in 2019.  I wouldn't mind getting some more of these.  There are many available on Yahoo! Japan Auctions - a lot of them are priced at 756 yen but I've seen a couple as low as 400 yen.
Posted by NPB Card Guy at 8:47 PM

According to a local shop owner, it's pretty likely that EPOCH made a net-loss on these EPOCH One cards. It doesn't appear as though they managed to reach the break-even point on most of the cards they made, but in the end EPOCH has a reputation now as a company that tries something for one year (or so) as a trial run before really switching it up in the years to come. I don't think the concept (instant cards commemorating really current milestones and events) will go away, not with Topps Now being as popular as it is and the Japanese companies doing everything they can to emulate it. But EPOCH One itself might change one way or another.

Thanks for the comment. It's good to get some insight from over there. I'm curious if BBM will try their own version of "instant cards". Or maybe a "living set"!

I am very interested in getting some of the 2019 Epoch One cards. How does one as an American order when it looks like you have to have a local Japanese address to place the order?

Your best bet is to look on Yahoo! Japan Auctions and pick the cards up on the secondary market using a proxy bidder. I wish there was a better way but unless you know someone in Japan willing to receive the cards for you that"s about the only way to do it.

You might try asking either kuboTEN or White Rabbit Express (links are on the sidebar) if they'd be willing to receive and repackage the cards for you.