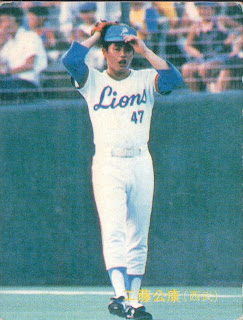 BBM's website has news up now for the first team set for 2011 - the Tokyo Yakult Swallows. As usual, it's a 99 card pack based set. There will be 77 "regular" cards for players, coaches and the manager, four combination cards featuring two players each, eight cards featuring (I think) current Swallows coaches when they were playing and a checklist card. There's also a nine card subset that I'm completely at a loss in attempting to translate (or more accurately, I don't understand either the Babel Fish or Google Translate interpretations).

Sad news today - YakyuShop has announced that they will be closing up shop on March 24. As a small consolation, they are running a sale on a lot of their stuff including packs of baseball cards. Lots of very cool jerseys and hats available also (unfortunately for me, most are too small for me).

The folks at YakyuShop were always very nice and sometimes went out of their way to locate card sets for me. I wish them the best of luck in their future endeavors. They will be missed.
Posted by NPB Card Guy at 4:50 PM 3 comments:

In 1957, Tamotsu Kimura of the Nankai Hawks went 21-11 with a 2.47 ERA to win the Pacific League's Rookie Of The Year award. In 1958, he hurt his shoulder 12 innings into the season and never pitched again. He returned to the Hawks as an outfielder in 1960 and played for a couple more seasons, but he still hit like a pitcher.

Here's his 1958 Doyusha Team Name Back menko card, from when he was 23 and on top of the world: 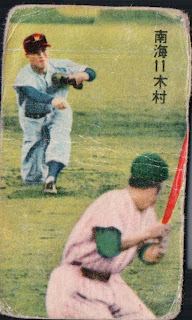 Thanks to Japan Baseball Daily's Data Warehouse for the information on Kimura.
Posted by NPB Card Guy at 9:31 PM 1 comment:

Happened to check Calbee's website today and discovered that they have information out about this year's Series 1 cards. As always, they've put a checklist on line for the set as well. The set will have 72 "regular" cards (6 per team, down from 8 last year) as well as a couple of insert/subsets. There's a two card League Champion (LC) subset featuring the Hawks and the Dragons, last year's 1st place finishers (although only one of them made it to the Nippon Series). There's a three card Nippon Series (NS) subset and four checklist cards. There's also a 24 card Top Player (TP) subset featuring two players from each team. There's a 22 card subset labeled "T" that I think is for 2010 award winners and statistical leaders. And finally, there's a 12 card subset (1 card per team) labeled "D" that I think is for rookies - because the Fighters' card is for - you guessed it - Yuki Saitoh.

BBM's website today announced this year's 1st Version set. There are some big differences with this set compared to previous editions. First of all, at 418 cards it's a lot smaller than the last couple 1st Version sets. As a point of comparision, last year's 1st Version set was 549 cards, 2009's was 553 and 2008's was 535. (Actually, now that I look it up, it's the smallest 1st Version set ever!) Looks like the major cause for the drop in set size is that instead of having 36 "regular" cards per team for players (and managers), the set only has 27 per team, for a total of 324 cards.

The other big differences lay in the subsets. As usual, there's a subset featuring the various statistical leaders from 2010 - 34 cards in all. There's also the usual Rookie/Future Star subset - this year it's called "Recommended Hope 2011" and only has 12 cards (1 per team) - you can pretty much bet that one of the cards will be Yuki Saitoh. But it's a big surprise that the other two subsets are for the winners of last year's Best 9 (19 cards) and Golden Glove (17 cards - no CL 1st baseman) awards. These had been insert sets rather than subsets since 1997 for Best 9 (with the exception of 1998) and 2000 for Golden Gloves. (I'm kind of happy that the Golden Glove cards are part of the regular set because they look pretty nice this year...)

The Best 9 and Golden Glove insert sets have been replaced by two new ones. There's a 24 card "Lightning" subset featuring (I assume) two players from each team. The other set is called "Golden Age 88" and contains 12 cards. Not positive what this is, but I'd be willing to bet money that it includes one player from each team who was born in 1988. Anyone want to hazard a guess as to which year Yuki Saitoh was born in? From the translation, I think these are an 88 card limited edition. In addition, there are memorabilia cards for last year's MVP and Sawamura award winners (Kazuhiro Wada, Tsuyoshi Wada and Kenta Maeda) plus Masahiro Tanaka.

The website doesn't currently list a release date, but I'd expect it to be out mid-April.
Posted by NPB Card Guy at 7:00 PM 4 comments: 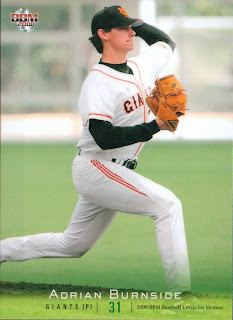 Card Of The Week February 6

In the other big playoff game of the day, the Adelaide Bite outlasted the Sydney Blue Sox 7-4 in a 15 inning marathon to win Round 2 of the Australian Baseball League's playoffs and qualify for the final round against the Perth Heat. Former Orix Blue Wave pitcher Dae-Sung Koo threw 6.2 innings in relief for Sydney and ended up taking the loss. (Since I had heard last summer that Koo was retiring, I wonder if this was his last game.) Here's Koo's 1999 Teleca card from his days with the Hanwha Eagles of the KBO (#151): 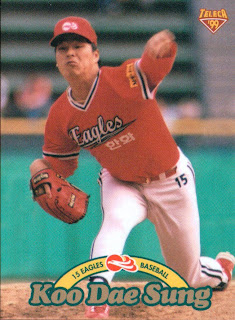