I have been meaning to get to this for the last couple months, but it's been kind of crazy. The Australian Baseball League returned this year after about 10 years. Two Japanese teams, the Yomiuri Giants and the Fukuoka Softbank Hawks, sent 10 players between them to play in the league. One of them, Yoshiyuki Kamei of the Melbourne Aces (and the Giants) had a phenomenal season, hitting .438/.500/.859 (batting/OBP/slugging) in 16 games (roughly half the season). There were a couple other former NBP players active in the league, including Chris Oxspring and Koo Dae-Sung of the Sydney Blue Sox.

As an aside, it looks like NBP teams are starting to look at ways to get more players involved in winter baseball leagues throughout the world. Since the folding of the second incarnation of the Hawaiian Winter Baseball League two years ago, Japanese teams have sent players to a number of leagues. In 2009, they sent five pitchers to the Arizona Fall League. This past winter, in addition to the Australian teams, they sent players to Puerto Rico and Venezuela. NBP Tracker has a nice roundup on who went where and what the NBP teams are thinking about here (with redundant comments by me - really need to read stuff carefully before commenting...).

The original Australian Baseball League debuted in 1989 with eight teams. The first baseball cards for the league came out during this season (1989-90) and were team sets for the Sydney Metros and the Perth Heat produced by a company called Futera. And by team set, I mean that they were very similar in size and design to the minor league card team sets that were being produced at the time. Here's an example card of Karl Hardman of the Metros: 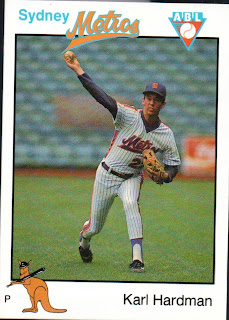 The following season, Futera again issued cards in team sets, this time for all eight teams in the league. Each set contained 15-20 cards for a total of 148 for the complete set. (And these are the only Australian cards I know of that I don't have.)

It doesn't appear that any cards were produced for the 1991-92 season. The next card set that I know of was a 50 card set for the 1992-93 season. What I don't know about this set is if it was sold as a complete set or if there were packs of cards available. Here's Dave Nilsson's card from the set (#15): 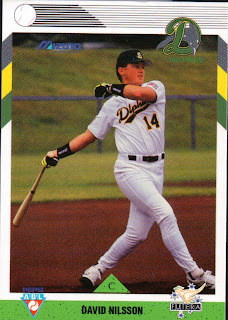 Futera's next set for the 1993-94 season was the largest so far - 110 regular cards plus 21 possible insert cards. This set was issued in packs of nine cards and beyond the regular player cards, it included cards for the previous season's award winners and champion (the Melbourne Monarchs). Here's the card of Jay Powell of the Perth Heat (#66): 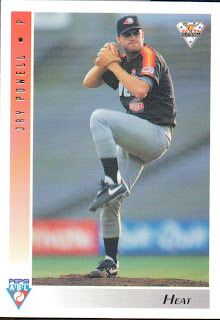 Futera continued the same pattern for the 1994-95 season - another 110 card pack based set with 18 additional insert cards. In addition to the regular player cards, it included subsets for "ABL Veterans" and the postseason ABL All Star team (equivalent to the Best 9). Here's Paul Loduca's card from the set (#52): 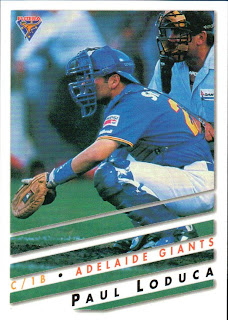 For the 1995-96 season Futera once again issued a 110 card pack based set (with 18 insert cards). The set contained subsets for the previous season's award winners (including the All Stars) and the playoffs (with the Waverly Reds defeating the Perth Heat). Here's Kelly Wunsch's card (#34): 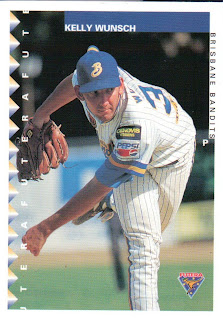 As far as I can tell, the 1995-96 season was the last one that Futera (or anyone else) did cards for the ABL. The league lasted until the 1998-99 season, then was sold to Dave Nilsson for $5 million. He converted the league into the International Baseball League of Australia which operated (I think) for two seasons - 2000-01 and 2001-02 - before folding. Again, as far as I can tell, there were no cards done for the IBL.

I'm not sure how many players from the league went on to play in Japan. (As far as I can tell, Jeff Williams never played in the league.) From this list of MLB players who played in Australia, the only one off hand that I know played in Japan was Eric Ludwick. Few of the more prominent players on the list appear in any of the Futera sets - none of Vernon Wells, Kevin Millwood or Gary Mathews, Jr are in any of the sets. Probably the biggest names in the Futera sets are John Jaha, Troy O'Leary, Paul Loduca, Greg Jelks and Homer Bush.
Posted by NPB Card Guy at 5:10 PM

Thanks for the information. I was doing a rush job on the post and I didn't spend a lot of time doing research. Forgetting about Nilsson was very sloppy on my part.

What I was trying to get to was figuring out which players in the ABL sets had played in NPB. Nilsson, Ludwick, Burnside and Lemon have cards in the sets. Fernandez and Gonzalez do not.

I must not have been clear, but I did mention that in the post.

To answer a Q you raised, 92-93 set of Futera cards was pack based.

There was a set of cards produced for the 97 or 98 season. Was made by FAI (an Insurer who sponsored the ABL in that year.) It was unnumbered, I have a partial set, unsure of how many there were in ttoal - guessing maybe 50 cards. From what I could tell, they were all Aussie players though, none of the "imports".

Correct that there weren't any cards for the current ABL reincarantion. There were a couple of fans making fan-made cards for fun, for swapping between themselves, but nothing official. Some of these did contain some of the Japanese players.

Thanks for the information. It's a pity that there aren't any cards for the new league.

Turns out I was incorrect - Adrian Burnside does not have a card in the old ABL sets.

FYI - the following website has some fan designed cards that feature Japanese players in the ABL.