Started this post a couple weeks ago, but between my work schedule and trying to catch up on all the new imports, it's been hard to find the time to get back to it.  But I have a package waiting at the post office that I'm going to pick up tomorrow that I think contains five sets from last fall, so if I don't get this done now, it might be a while...

We're getting into the couple years that I don't have a whole lot of BBM cards from.  I'll do the best I can extrapolating but I might not be completely accurate here.  (Yeah, yeah, I know - what makes this different than any other post...)

Instead of a "Nostalgic Stars" subset like in the previous four editions, this year BBM featured OB (and one current) players in the "Untouchable Records" subset.  The subset commemorates a number of NBP record holders - Sadaharu Oh (2 cards), Yutaka Fukumoto, Katsuya Nomura, Sachio Kinugasa, Isao Harimoto, Ichiro, Masaichi Kaneda (2 cards) and Hideo Fujimoto.  (Ichiro's "unbreakable" record was for most hits in a season - it was broken last year by Matt Murton.)

The "Then And Now" subset featured a number of players (not quite sure how many) who had recently changed teams (maybe prior to the 94 season?).  I think some of the players included are Norihiro Komada, Hiromitsu Ochiai, Koji Akiyama and Makoto Suzuki.

There were three nine card puzzle subsets - one each for Ichiro, Hideki Matsui and Hideki Irabu.  The fronts of the cards featured a sequence of photos of the player while the backs made up the puzzle.


There were seven "combination" cards featuring multiple players - including for the first time two that had three players on them.  The cards were again labeled with somewhat whimsical titles such as "Fan Favorites" or "Pacific Punch"

For the first time, some of the team checklists featured a photo of the team's mascot rather than simply the team's logo.  For a couple teams (the Marines and the Buffaloes), the team logo was still used - I'm guessing that neither team had a mascot at the time)


For the first time, BBM issued a parallel series with cards featuring gold facsimile signatures.  Only 130 of the cards had the parallel issue.

For the Late Series, BBM replaced the cards for the Chiba Lotte Marines to celebrate them getting new uniforms.  (10 of the cards had gold signature parallel versions)  In addition, there were five completely new player cards added - three for Americans who signed after the season started (Rich Monteleone, Terry Bross and Kevin Mitchell) and two for Japanese players who had been traded during the season (Masato Yoshii and Tatsuji Noshimura).  There was also a checklist card added for the Late Series cards.


UPDATE:  Scott Kaneko sent me scans for a couple of the All Around Player inserts - Hideki Matsui (#AA8) and Masumi Kuwata (#AA10): 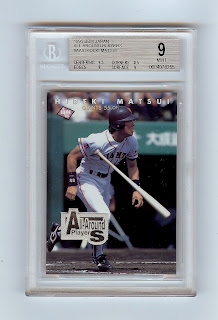 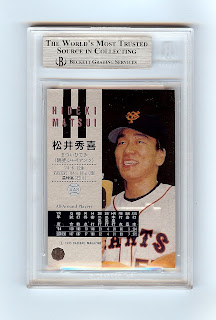 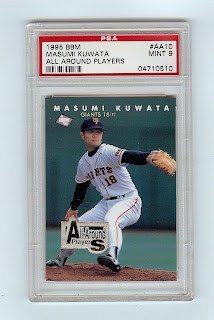 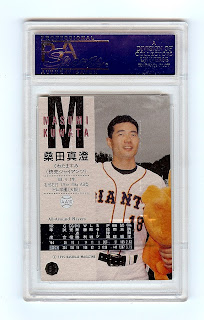 A couple of months back, BBM released a box set called Neo Dragons that featured 12 young Chunichi Dragons players.  Last week, they announced on their website another new box set for the Dragons - the Veteran Dragons set.  This set features 28 cards - 27 "regular" cards and an insert card.  The 27 "regular" cards only include nine players total, but each player has three different cards in the set.  The players include the older players on the Dragons - Masahiro Yamamoto, Motonobu Tanishige, and Kazuhiro Wada for example.  I'm not sure, but I think the only insert cards available are autograph cards.  The set will be out in late February.

AmiAmi added a listing last week with information on the 2012 BBM 1st Version set.  As always, this set will be released in mid-April.  It looks like this set might be slightly larger than last years - AmiAmi's claiming the set will have 479 cards while they claimed last year's would have 458.  (The actual total for last year's set was 460 - 418 regular cards, 36 inserts and 6 memorabilia cards.)  The bad news is (if their listing is accurate) that the number of cards in a pack has been slashed from 8 to 6.
Posted by NPB Card Guy at 9:35 PM No comments:

Card Of The Week January 29

One of the big stories in MLB last week was Prince Fielder signing with one of his father's old teams, the Detroit Tigers.  Made me wonder if he had considered his father's OTHER old team called the Tigers, the Hanshin ones.  Probably not.

Here's the elder Fielder with Hanshin in 1989, from the Tiger's Takara set that year: 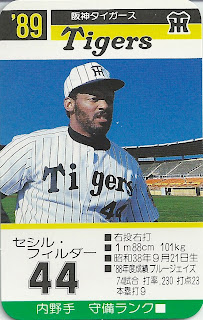 Norichika Aoki of the Milwaukee Brewers

Former Swallows outfielder Norichika Aoli signed a contract with the Milwaukee Brewers last week.  Aoki has a draft pick card in the 2004 BBM Rookie Edition set (#61) and his BBM rookie card is in the 2004 1st Version set (#308).  He did not have a card in the 2004 BBM 2nd Version set, but he's appeared in all the 1st and 2nd Version sets since then.  He appears in every BBM All Star set from 2005 to 2011.  Since the Swallows have not made the Nippon Series since 2001, he doesn't appear in any Nippon Series sets.  He does, however, appear in the 2008 BBM Japan National Team set as well as several of the Topps & Bowman sets for the 2009 World Baseball Classic.  His first Calbee card is #125 in the 2005 set.

Yoshihiro Doi of the Baltimore Orioles

Here's some of his cards:

Wei-Yin Chen of the Baltimore Orioles

Former Chunichi Dragons pitcher Wei-Yin Chen signed a contract with the Orioles recently.  Chen is from Taiwan originally, but he never played professionally in his home country (although he did pitch for Taiwan in the 2004 and 2008 Olympics).  He signed with the Dragons in 2004 at age 18.

Chen pretty much only played for the ni-gun Dragons from 2004 to 2007, only making appearances with the big club in 2005.  He finally made the ichi-gun squad to stay in 2008, so he really only has four years of experience at the top level of NBP.

Looking up his cards in SportsCardForum is kind of problematic as BBM has referred to him as "Wei-Yin Chen", "Wei Yin Chen" and even "Weiyin Chen", so you need to either do multiple searches to find all his cards or search for "Chen" and pick out the relevant cards (some of which are listed as "Wei Ying Chen").

Card Of The Week January 22

I was working out on Wednesday afternoon when the news broke about Yu Darvish signing his contract with the Rangers.  I started wondering if there would be someone new who there would constantly be rumors that he was about to ask to be posted, so that every single year we could have the same idiotic articles and tweets and insider reports by Ken Rosenthal saying that really, this is the off season when so-and-so will be coming to the US.  And I wondered who that player might be.

Well, I think I've got an answer.  Probably before the ink was dry on Darvish's contract, there was a comment to this post on NBP Tracker asking when (and if) Masahiro Tanaka (of the Eagles) would be posted.

So just in case he does come, here's what his first baseball card (2007 BBM Rookie Edition #40) looks like, in case you want to start stocking up now: 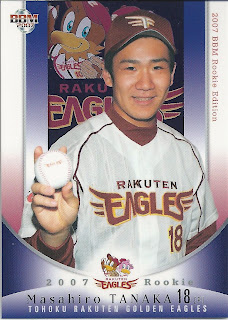 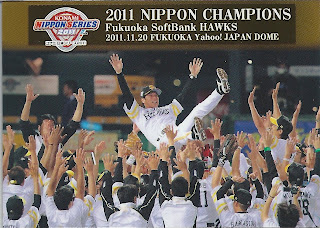 BBM's 2011 season comes to a close with the annual Nippon Series box set.  The set contains 63 cards this season - cards for every player who appeared in the Series between the Hawks (25) and the Dragons  (30) along the team's managers.  There are also cards for the winners of the major awards - MVP (Hiroki Kokubo), Fighting Spirit (Kazuki Yoshimi) and Outstanding Player (Brian Falkenborg, Toshiya Susiuchi and Kazuhiro Wada).  There's also a card showing the Hawks celebrating (#S63 shown above).

I guess I shouldn't be surprised since this year's BBM 1st Version set was so small, but there's an unusually large number of players who appear in this set who do not appear in either the 1st or 2nd Version sets.  There are 11 Dragons (Takehiro Donoue, Atsushi Fujii, Nobumasa Fukuda, Ryosuke Hirata, Yuichi Hisamoto, Junichi Kawahara, Masato Kobayashi, Masaaki Koike, Hidenori Kuramoto, Keiji Oyama and Yoshihiro Suzuki) and five Hawks (Kenji Akashi, Kenta Imamiya, Takehito Kanazawa, Ryuma Kodokoro, Hiroki Yamada) did not make the earlier sets.


As always, BBM's photography is outstanding.  The photos were all taken during the Series, although I think there's only one card (the Dragons' Ryosuke Hirata) that shows a player from the other team in the background.  Here's some sample cards:


The complete set of cards can be viewed here.
Posted by NPB Card Guy at 10:59 PM No comments:

The 2012 inductees for the Japanese Baseball Hall Of Fame were announced last week and both players elected from the Player's Division were former Hiroshima Toyo Carp pitchers - Manabu Kitabeppu and Tsunemi Tsuda.

Tsuda pitched for the Carp from 1982 to 1991, although health issues limited him to only six games total in his last two seasons.  He was Rookie Of The Year in 1982.  After a couple of seasons as a starter, he converted to relief and became the team's closer from 1986-1989.  He passed away from a brain tumor in 1993.


NOTE - I realized a couple of days after posting this that Masahiro Yamamoto had reached 200 wins also since Kitabeppu did, so I thought I should retract the comment altogether in case I missed someone else.
Posted by NPB Card Guy at 10:27 PM No comments:

Yu Darvish Of The Texas Rangers

Between a rash of recent signings and my crazy work schedule last week, I've really gotten behind on the new imports.  I'll start getting caught up with the big one...

This week, after years of speculation about when and if he was going to come to the US, we finally have an answer.  Yu Darvish will be pitching for the Texas Rangers in 2012 (and 13, 14, 15, 16 and 17).  I'd actually done a post on Darvish cards a few years back, but that was almost 4 years ago, so there's a lot more to talk about now.  (There's a wide variety of Darvish cards showing up on eBay.  I'm kind of surprised that I'm only seeing one out-and-out bogus card - although it seems like I'm seeing it every other auction.  Guess the guy printed up a boatload of them.)

His first Calbee card was #037 in the 2006 set.  He pitched for Japan in the 2009 World Baseball Classic and appears in many of the card sets Topps put out in conjunction with the event.  (He had seven different "base" WBC cards with Topps - more than any other Japanese player and I think more than any other player - Derek Jeter and Ichiro both only had six.)

As always, this is just some of the highlights.  Check SportsCardForum for a more complete list.