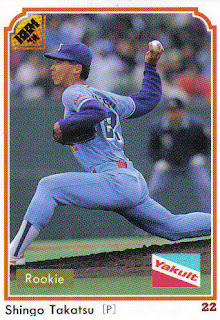 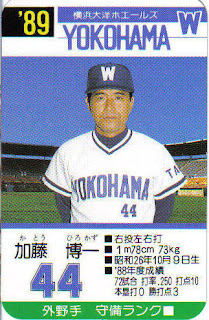 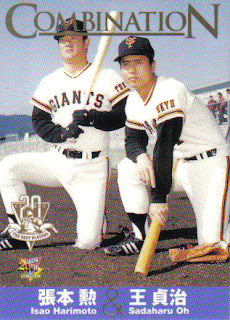 Deanna also has posts #2 and #3 in her series on baseball card shopping in Japan now up.
Posted by NPB Card Guy at 7:36 PM No comments:

Card Of The Week January 20

I once caught a fish tthhiiiss big. 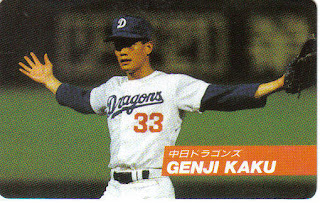 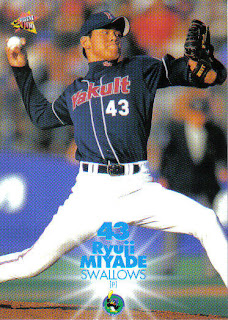 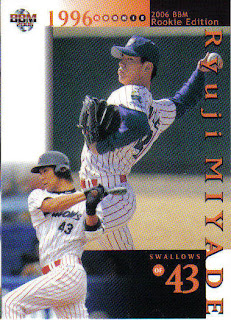 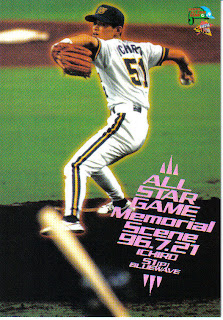 Deanna Rubin has had a couple of posts about baseball cards lately - one on some Fukubukuro (lucky bags) she bought at a store recently and one on three card subsets from BBM team sets that make a picture when you line them up. The last post also talked about a Draft Story card she got for a Whales pitcher from 1989 named Tadanori Ishii. Turns out we know him better as Baystars infielder Takuro Ishii. Now, according the Japan Baseball Daily's bio of him and Baseball Reference, Tadanori is his real first name and he converted to be an infielder in 1992. Curiously, he signed outside of the draft in 1988, which makes one wonder why he appeared in the Draft Story set. Anyway, here's the earliest card I have of him - his 1993 BBM card (#362): 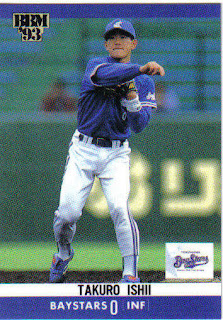 This is BBM's first card of him. It looks like he has earlier cards in the 1992 Calbee set and the 1990 Takara Whales set. I don't know if the 1992 card shows him pitching and I don't know if either card lists him as Tadanori. I do know that this was the only year he wore uniform number 0. He was 66 prior to this and 5 afterwards.
Posted by NPB Card Guy at 6:29 PM 3 comments: 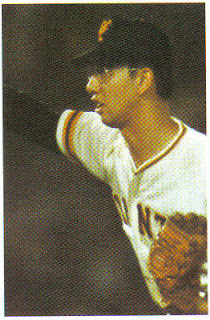 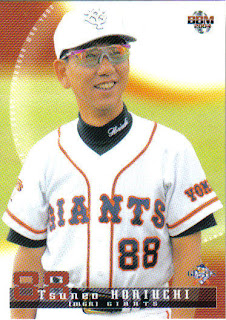 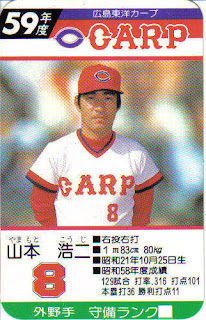 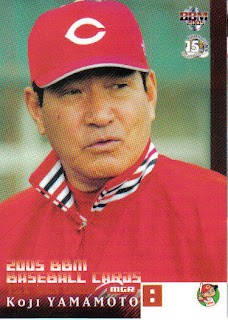 Card Of The Week January 6 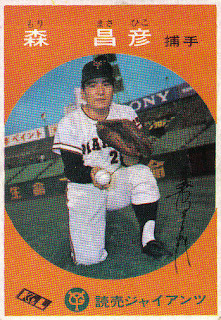 The Kabaya-Leaf cards were the first Japanese cards to resemble American cards. I'll have to a blog entry for them at some point, but suffice it to say that they are very cool, very popular and very rare.

(Thanks to Japan Baseball Daily's "Today In Japanese Baseball History" for the tip.)
Posted by NPB Card Guy at 7:53 PM No comments:

A Year of BBM cards

I've been meaning for a while to do a post describing the sets that BBM produces each year. By my count, each year BBM does roughly 17 sets sold in packs and about 8 sets sold as box sets. Here's a quick run down of these sets:

Rookie Edition - This is a draft pick set. In addition to the cards of the draft picks, there's a group of cards of current players, usually showing a picture of them from their rookie year. This set has been produced each year since 2003. It replaces a set called Preview that BBM produced from 1999 until 2002. The Preview sets would typically contain 10 cards per team, with the 2000-2002 sets including a card of the team's top draft pick. Rookie Edition is released some time in the winter.

1st Version - This is BBM's largest set. It contains roughly 35-40 cards per team plus cards for the managers and team checklists. It also contains cards for the statistical leaders for the previous year. It is usually released in April.

All Star box set - This set contains cards for all the players who are selected to the All Star teams, as well as the manager and coaches. Since the set comes out right around the time of the All Star games (mid-late July), the cards do not show action from the games themselves, although there are usually cards celebrating the MVPs from the previous year's games. These sets have been produced every year BBM has been making cards (since 1991). The first ten years the cards were roughly the same design as the regular BBM set. Since 2001, the cards have had their own design.

2nd Version - This is a smaller set than the 1st Version, usually containing 9-15 cards per team as well as an update subset for the 1st Version. Other cards in the set might highlight 1st Pitch ceremonies or notably events in the first half of the season. This set usually comes out in August or September.

From 1991 to 2001, BBM only produced one "regular" issue set (I'll leave discussion of Later Series sets for another time). BBM started producing the 1st and 2nd Version sets in 2002. From 2002-2004, these sets were roughly the same size - about 30 players per team. The current differences between the two versions started in 2005.

Touch The Game - This is BBM's "high end" set - think Topps Finest or Upper Deck SP. I can't really say more about it because I've always avoided the "high end" sets - typically they cost more money and I find them to be very ugly. BBM has been producing Touch The Game sets since 2002 (I think). They replaced the Diamond Heroes sets that BBM produced from 1996-2001 (which were also expensive and ugly). I think Touch The Game usually comes out in late summer.

Team Sets - BBM produces a 100 or so card set for each of the 12 teams. Typically these sets will contain cards for every player on both the major league and minor league roster along with subsets like team leaders, etc. They will occasionally contain OB players in historic subsets as well. Originally, BBM published team sets as box sets during the 1990's. I think the first was a Tigers box set in 1994. BBM's first team set that was sold in packs was the 1999 Tigers set. Other teams were added in the following years until 2003 or 2004 when sets for all 12 teams were first produced. These sets usually are released anywhere from March through August.

Climax Series box sets - Starting in the mid to late 1990's and continuing until the Japanese leagues instituted the current play off system (the Climax Series) (Pacific League started in 2004, Central League in 2007), BBM would publish a box set for each league champion. Each set would contain 20-30 card for the players and usually a subset of season highlights. In 2004, they produced the Pacific League Playoff box set which contained 15 cards for each of the three teams in the playoffs. What it looks like they've done since then is produced small, 30 card box sets for each of the 6 teams in the playoffs. These sets are usually released in October. Like the All Star sets, the cards don't show any action from the playoffs.

Nippon Series box set - I described this set in an earlier post. This set highlights the teams that compete in the Nippon Series. The cards actually show pictures from the Series. This set usually comes out in December. As was the case with the All Star sets, BBM has produced these sets every year they've made cards (since 1991), using a similar design to their regular set from 1991-2000 and a new design ever since.

Take all this with a grain of salt. Just because BBM has produced these sets like this the last few years doesn't mean it will do it again this year. BBM will also produce additional sets that don't get made every year (like the Nostalgic Baseball set from 2006) and the occasional special set for a player that's retiring (like this year's Atsuya Furuta set) or coming to America (like the 2003 Hideki Matsui set or last year's Masumi Kuwata set).
Posted by NPB Card Guy at 4:35 PM 4 comments: