I've been asked a couple times in the past few months what Shohei Ohtani's "best" rookie card is.  I find this a difficult thing to answer as the question of "best" is pretty subjective, as is what actually constitutes a rookie card.  I've decided to not really answer the question - instead I'm going to present a variety of Ohtani cards from his rookie year of 2013 and allow readers to make their own judgements.  (For the most part I'm only listing the "regular" player cards although he had several appearances in subsets in some of BBM's sets that year.)

Ohtani's first card ever was actually an insert in Sports Card Magazine #97 which was released in late January 2013.  It was a promo card for the 2013 BBM Rookie Edition set - I lucked into a silver facsimile autograph parallel of it:

He had two cards in BBM's Rookie Edition set that had the same number - one showed him pitching and the other showed him batting:


His first BBM "flagship" set cards were in the 2013 1st and 2nd Version sets.  He had two cards in the 2nd Version set - his regular card and a "Cross Wind" cross set subset card:

He had a number of parallel cards in the sets - I'm not entirely sure what all is available in the different sets as BBM's parallels are somewhat bewildering.  I do have a pretty good sense for what's available in terms of autograph and memorabilia cards for him from BBM's 2013 offerings due to this page from SCM #117: 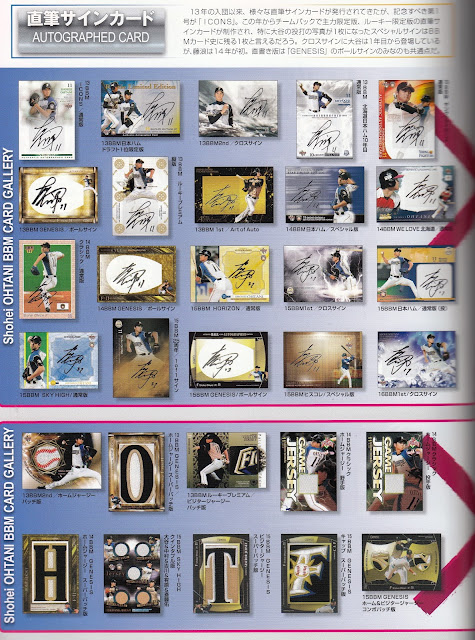 
According to The Trading Card Database's listings, he also had a card in the second Owners League set from Bandai that year (#072).
Posted by NPB Card Guy at 9:33 PM 40 comments: 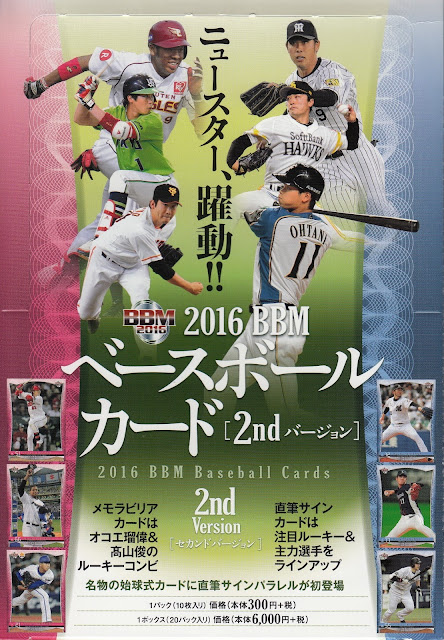 
Size: 313 cards (cards numbered 337-600, then 12 cards of "Ceremonial First Pitch" subset are separately numbered FP01-FP13 and 36 cards for "Cross Freeze" subset are separately numbered CF37-CF72)
Cards Per Team: 19 (team card + 18 players)
Team Card Theme: Mascots
Number Of Leader Cards: N/A
Checklists: 0
Subsets: 1st Version Update (36), Ceremonial First Pitch (13), Cross Freeze (36)
Inserts: One And Only
Memorabilia Cards: Undershirt cards for Louis Okoye, jersey cards for Shun Takayama and a "Combination" undershirt & jersey card with both of them.  The single jersey cards are numbered to 100 while the "Combination" card is numbered to 10.  There's 30 different players who have autographed cards (3 per team but none from the Giants or Carp).  Seven of those 30 have what I think is a separate autograph card.  Four of the "Ceremonial First Pitch" cards have an authentic autograph version.
Parallels: 15 of the 1st Version Update and 57 of the regular player cards have five different facsimile autograph parallels.  I think that they are silver (unnumbered), gold (numbered to 100), hologram (numbered to 50), red (numbered to 25) and green (numbered to 10).  There are two parallels for the "Cross Freeze" cards - one is limited to 100 and the other is a "1 of 1".  There is a parallel (limited to 100) for the One And Only insert cards.
Notable Rookies: Jun Hasegawa

This year's edition of BBM's 2nd Version set came out a couple weeks back.  The regular cards in the set feature something a bit rare for BBM's flagship sets - borders.  I don't necessarily view this as a good thing as one of the things I like most about BBM's flagship sets is the full bleed photos.  This is the second year in a row where the 2nd Version set has had borders and I don't like the trend.

On the positive side, however, this set appears to signal a change in the "batters batting, pitchers pitching" photo monotony that's been common in BBM's sets lately.  There's not a small number of photos featuring players fielding and base running and even a couple candids.  I also like that there's a variety of uniforms represented in the photos - throwbacks for the Tigers and Baystars and alternates for the Swallows and Giants (and I'll be updating the uniform posts with some of these soon).  So while I don't like the borders, I do like the photos.  Here's a bunch of examples:


I will make my usual 2nd Version set complaint that some of the poses for players are very similar between their 1st and 2nd Version cards:


Here's what the back of the cards looks like.  The stats are as of May 30th.

The team cards were a bit of a disappointment for me - the theme was mascots.  I guess it was too much to ask that we go an entire year without mascots as a flagship set team checklist theme from BBM...

The set has the usual 36 card "1st Version Update" subset.  This subsets features three cards per team of players who were left out of the 1st Version set for whatever reason.  The cards are done using the design of the 1st Version set.  This year's subset includes several foreign players (Drew Naylor, Pat Misch, Yamaico Navarro and Mike Zagursky) along with veteran players like Shota Dobayashi, Hitoki Iwase, Yuya Hasegawa, Shogo Kimura and Yoshihisa Naruse.

Like last year, BBM did not include Shohei Ohtani in the regular 2nd Version cards because they included him in the "1st Version Update" subset.  His 1st Version card this year had him as a pitcher but the Update card has him as a batter and outfielder:

The 2016 version of BBM's annual (practically) cross-set subset is called "Cross Freeze" and 2nd Version has the second (and possibly final) installment of the subset.  Like the 1st Version set, 2nd Version has 36 cards in the subset (3 per team of course).  As always, these cards feature the image of a player superimposed on a background (an icy one this year) and are numbered separately from the rest of the set.

The subset also includes a couple of cards commemorating the first pitch ceremony featuring Sadako from "The Ring" and Kayako (and her son Toshio) from "The Grudge" at the Tokyo Dome on June 1.  This was a promotion for the movie "Sadako vs Kayako" that came out in June.

I picked up the 12 card "One And Only" insert set with the set.  There are 12 cards in the set (one per team) which includes a number of big stars (Ohtani, Yuki Yanagita, Tetsuto Yamada, Yoshitomo Tsutsugoh, Hayato Sakamoto).

As usual, all the cards for the set (along with parallels and inserts) can be seen at Jambalaya.
Posted by NPB Card Guy at 9:13 PM 1 comment:

Card Of The Week August 28

Thursday's game between the Eagles and Hawks took a kind of unexpected turn late in the game.  The Hawks were up 5 to 4 going into the top of the ninth which is normally time for Dennis Sarfate to come in and close the door.  Unfortunately for the Hawks, Sarfate hurt himself two days earlier and was not available and the closing responsibility fell on Robert Suarez.  The Eagles got two of the first three guys on base in the inning and then Eigoro Mogi stepped to the plate...


Mogi hit a low sinking line drive that center fielder Yuki Yanagita attempted to do a sliding catch of and missed.  The ball skipped by him and rolled all the way to the wall.  By the time Yanagita ran the ball down and threw it to the infield, Mogi had made it around the bases for a three run inside-the-park home run.  The Eagles ended up winning the game 7 to 5 which coupled with the Fighters 4-1 win over the Marines knocked the Hawks out of first place for the first time since April 18th.

Mogi's home run (which probably should have been ruled an error) was only the second one of his career and I suspect was his first inside the park one.  Here's his Calbee rookie card from this year's Series Two (#104): One of the things I've noticed when I've been leafing through Sports Card Magazine's Price Guide listing for BBM's baseball issues is that there are a number of variants listed among the flagship sets.  I noticed a number of times in the Price Guide where there would be an 'a' and a 'b' version of the card (and two times where there was a 'c' version as well).  I thought I'd do a list of what I know about the variants.

Research for this was a bit difficult.  Engel only lists one of these variants and really doesn't go into any detail about it.  I did some searches on Yahoo! Japan Auctions to see what I could find but that only really helped with one card.  Luckily, however, I had been contacted by a Japanese card collector named Takashi last year who was interested in a trading cards.  One of the cards that Takashi was looking were the Hideki Irabu cards I'll be mentioning in a moment.  I asked him what the story was with those card and he told me.  He also offered to answer any other questions I had about BBM cards and I took him up on the offer and asked about the other cards as well.  While he didn't know about all the cards, he knew much more than I did about them so most of the following should be credited to him. 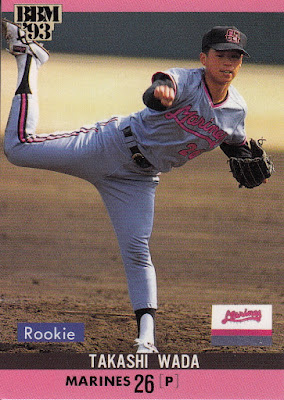 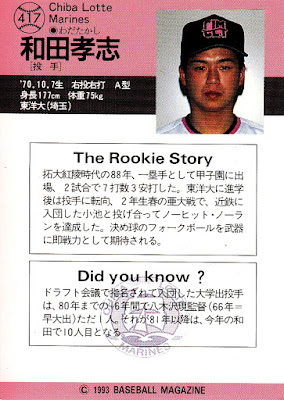 I don't have a copy of the 'a' version but oddly enough, this is the card that Gary Engel uses as an example card for his listing of the 1993 set: 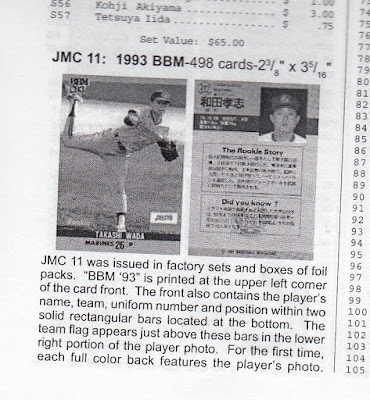 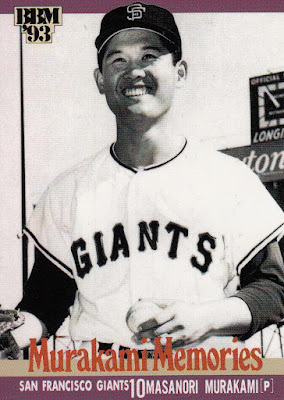 This is the variant that is listed by Engel.  Takashi says "There is a notation error on the back side of the sentence" that was corrected on the 'b' version.  I don't know which version I have but here's the back side of it: 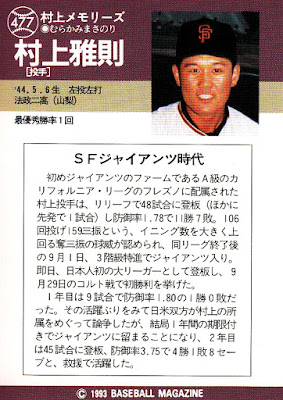 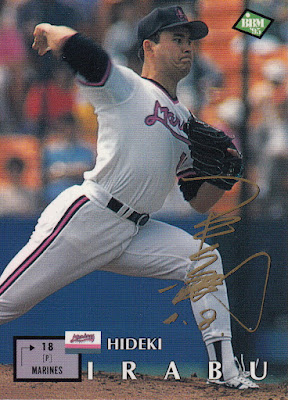 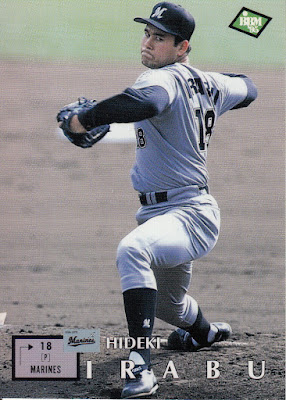 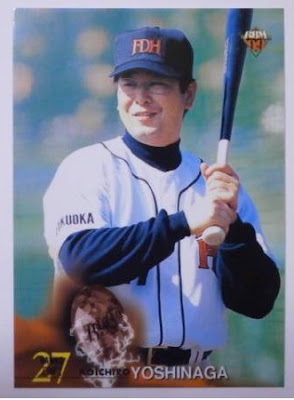 Takashi says that the original version of this card has an incorrect photo but he didn't know any more details about it.  I don't have this card but I found this image on Yahoo! Japan Auctions.  I don't know which version of the card this is although I'm pretty confident that this is Yoshinaga so it's probably the corrected version.  SCM #116 has both versions listed at 50 yen. 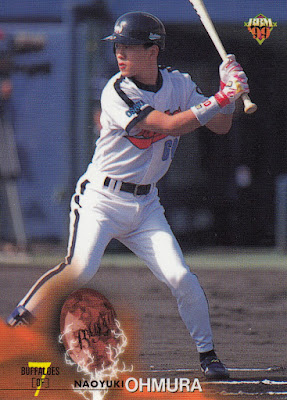 This is another case with an incorrect photo (kind of) but I think I understand what happened here.  Notice in the above card that while the player's number on the card is 7, the player's uniform shows #60.  Ohmura had worn #60 prior to 1999 when he switched his number to 7 so I think this is a picture of him with his old number (there's a possibility that this is a picture of Hironori Fujisaki who took uniform #60 in 1999 but it's unlikely as the little bit of the left sleeve patch looks like the one on the 1998 uniforms and Fujisaki was a pitcher).  I don't have the corrected card but I found it on Yahoo! Japan Auctions (and the auction indicated that it was the corrected version): 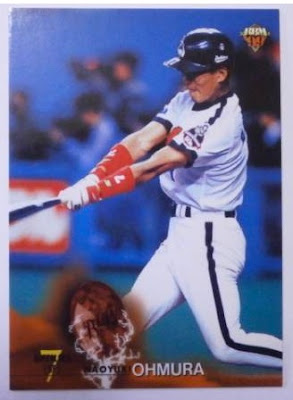 (And just so you know, Yoshinaga didn't change his number for 1999 so I don't think his card was corrected for that.) 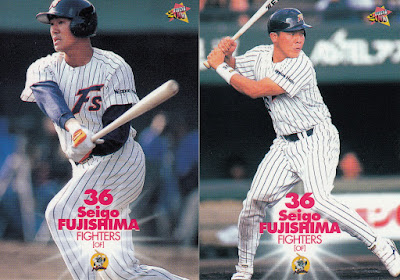 I've talked about this one before.  This is the only one of these cards that I have both version of.  The one on the left is the original while the one on the right is the corrected version (obviously).  Takashi did not know why the change was made although I think he thinks that the original photo is not Fujishima.  SCM #116 has both cards at 50 yen. 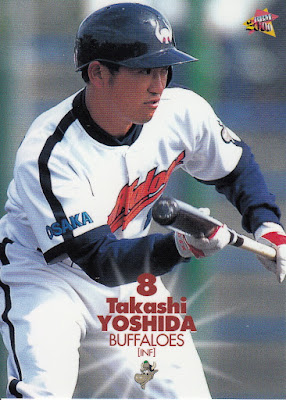 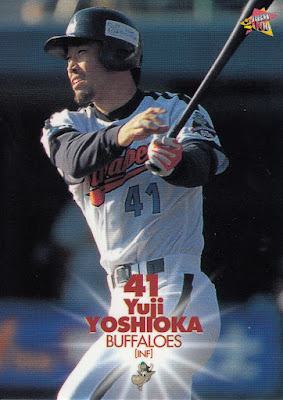 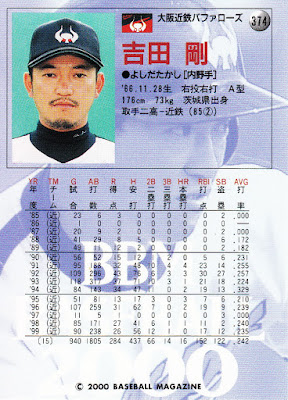 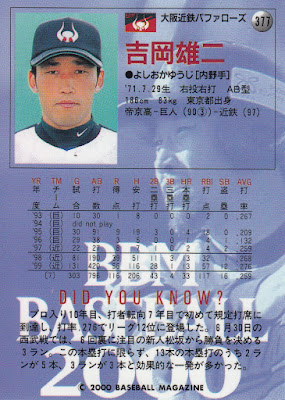 Yoshioka's facial hair makes it kind of obvious.  I don't have the corrected version of the cards and I couldn't find an image of them.  SCM #116 has all four of the cards at 50 yen. 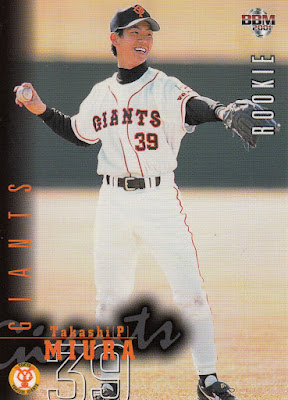 This is a fairly straight forward one - the original version of the card has the player's name as "Takashi Miura" rather than "Taka Miura".  Here's the corrected version (from Yahoo! Japan Auctions): 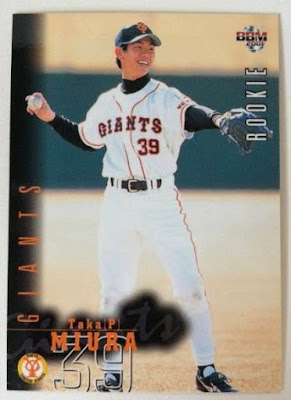 SCM does not list the Reader/Leader variants from the 2000 BBM set as separate versions but obviously these are another example of corrected cards.

Thanks again to Takashi for all his help.  Anything incorrect here is my fault, not his.
Posted by NPB Card Guy at 9:47 PM 3 comments: