I want to wrap up my posts on BBM History with a discussion of their occasion "Late Series" cards. In six of their "regular" sets between 1994 and 2001, BBM essentially did a second printing of the set in which they replaced all the cards of one or two teams with new cards with both new pictures and new numbers.

The first time they did this, 1994, BBM replaced the first 42 cards of the set (all the Yakult Swallows cards, including the team checklist) with cards numbered 567 to 608. The reason for them doing this apparently is that the Swallows changed their uniforms and hats between the 1993 and 1994 seasons. Here's the cards of Atsuya Furuta (#16 on the left and the "Late Series" #582 on the right): 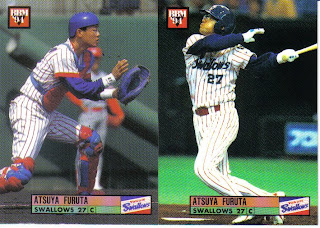 If it isn't obvious, the difference in the uniforms is that the 1993 jersey had a red band at the end of the sleeve. You can't see his hat in the original card, so you can't see the old design. What's odd is that the backs of the two cards are identical except for the card number: 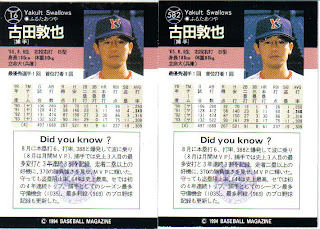 The head shot shows him wearing the new hat design in both cards.

In 1995, BBM replaced all the cards of the Chiba Lotte Marines with new ones due to the Marines changing their uniforms. In addition, they added cards of a couple late signing Americans (Kevin Mitchell, Terry Bross and Rich Monteleone) as well as "update" cards for two Japanese players (Masato Yoshii and Tatsuji Nishimura) who changed teams during the season. This would be the only time BBM would issue "Late Series" cards that were not part of a complete team or an update of an earlier card. Unfortunately, I can't show any before and after pairs of cards for 1995 (or 1996), but I can show what Norifumi Nishimura's "Late Series" card (#632) looks like: 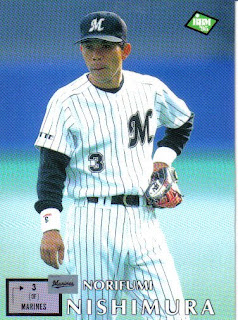 For the 1996 season, the Carp changed their uniforms. BBM apparently didn't care though, because the "Late Series" cards that season instead focused on the Chunichi Dragons. The Dragons were celebrating their 60th Anniversary that season and BBM replaced all the Dragons cards with ones showing the players wearing the Anniversary patch on the sleeve of their jerseys. The cards also included the 60th Anniversary logo on the card itself. Here's Yoshiaki Kanemura's card as an example (#637): 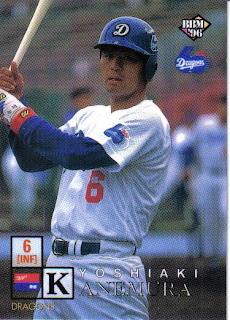 BBM didn't issue any "Late Series" cards for either the 1997 or 1998 sets. However, in 1999 the Swallows made a major change to their uniforms for their 50th Anniversary and BBM decided it was time for a comeback. Here's the original (#107) and "Late Series" cards for Kazuya Tabata (#596): (As before, the backs of the cards are identical except for the card number - the picture shows the player in the old uniform) 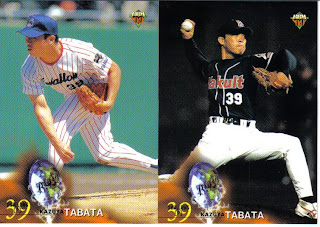 I'm guessing that the return of the "Late Series" in 1999 was popular enough that BBM decided that more would be better in 2000. For that year's set, BBM decided to update the cards for two teams instead of only one. The Marines introduced a new alternate uniform that season, so they were one of the teams. Here's the cards of Atsushi Yoshida (#94 and #550): 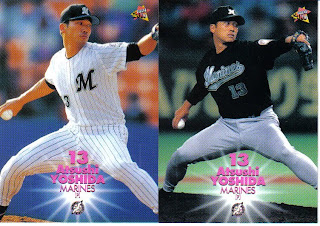 The Tigers changed their home hats from white pinstripes to solid black. Despite the fact that some of the cards already showed this change, BBM decided to do them as well. Here's the cards of Osamu Hoshino (#495 and #613): 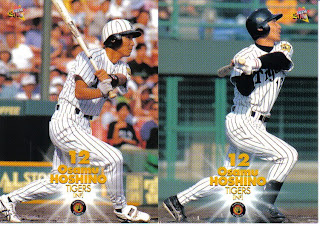 One thing the 2000 "Late Series" cards allowed BBM to do was correct a rare error. The original printing of the "Leader" cards were labelled "Reader" instead. Here's the original Strikeout Leader card of Kimiyasu Kudoh (#20) showing this error: 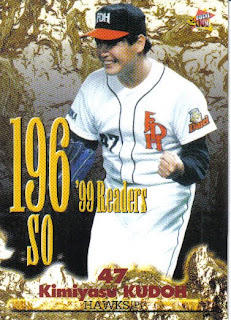 2001 would be the last year that BBM would do "Late Series" cards and they decided to go out with a bang. Once again, they updated two teams. The Tigers changed their away uniforms to ones without pinstripes so they once again were chosen as one of the teams. Here's Kazuhiko Shiotani's cards (#374 and #580): 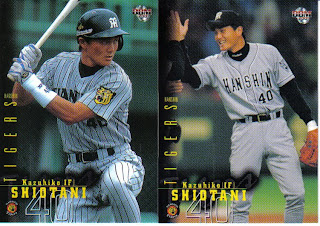 The other team was the Orix Blue Wave, who changed both their home and away uniforms. Here's Shinichi Katoh's cards (#210 and #598): 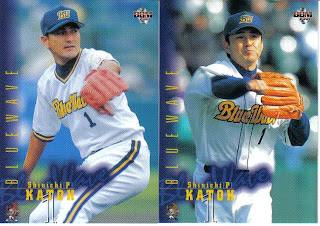 BBM decided in 2001 to not only update the Hanshin and Orix team sets for the "Late Series" but also all the insert and memorabilia cards. I suspect but don't know for sure that that means there are two different versions of card #555 which was the special cards checklist - the one I have shows the "Late Series" cards. Here's the Best 9 insert cards for Atsuya Furuta (#B2 and #B2) and the Golden Glove insert cards for Kimiyasu Kudoh (#G1 and #G19): 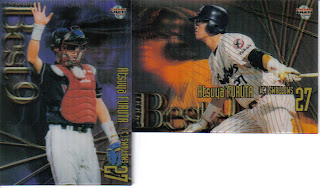 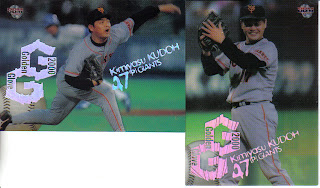 The introduction of the 1st and 2nd Version sets for the 2002 and later seasons did away with the opportunity for BBM to issue "Late Series" cards - essentially the 2nd Version set became the "Late Series", especially starting in 2005 when that set started to include a "1st Version Update" subset.
Posted by NPB Card Guy at 8:36 PM