I mocked BBM's Hanshin Tigers 75th Anniversary set when it came out, but I ended up buying one anyway (mostly because I only had about 25 or so of the 2005 Tigers 70th Anniversary set...) Like all the other Anniversary sets that BBM's done over the last few years, it has 99 cards in it.

The first seven cards of the set are devoted to "Team History". The 2005 set also had a seven card "Team History" subset that had one card each devoted to one decade of the team's history. This set instead simply picks seven "Memorial Scenes" in Tigers history. Not completely sure what all of them are but I think there's one for first league championship in the 1937 Fall season, for the 1947 Championship, for Yutaka Enatsu's performance in one of the 1971 All Star games and the 1985 Nippon Series championship. There's also cards for some event in the 1972 season, something Tomoaki Kanemoto did in 2004 and something for Kyuji Fujikawa. Here's the card for the 1947 Champs (#02): 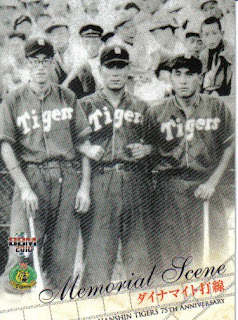 There are 65 cards for OB Tigers. As usual, this includes not only retired players, but former Tigers who are still playing for other teams (including Kei Igawa who's still playing in the States). I haven't done a thorough comparison of this group as compared to the group in the 2005 set but I'm pretty sure they overlap significantly. I'm not seeing any major omissions off hand. As seems to be par for the course with the Anniversary sets, there's an emphasis on more recent players - there's only maybe five or six cards of players who began their careers with the Tigers pre-1950. There's a couple unusual gaijin represented (Willie Kirkland and Hal Breeden) along with some more conventional choices (Randy Bass, Tom O'Malley and Jeffrey Williams). Otherwise, the selection includes pretty much who you'd expect - Enatsu, Masayuki Kakefu, Yoshio Yoshida, Akinonu Okada, Tsuyoshi Shinjyo, Masuru Kageura, Masaaki Koyama, Minoru Murayama, Taira Fujita and Koichi Tabuchi. Here are the cards for Takeshi Doigaki (#13), Yutaka Enatsu (#27), Willie Kirkland (#16), Tadashi Wakabayashi (#08) and Yoshiharu Wakana #40): 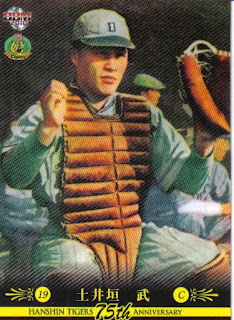 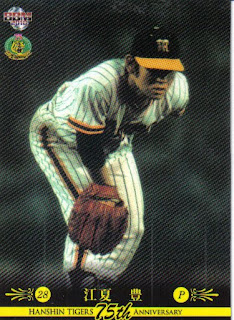 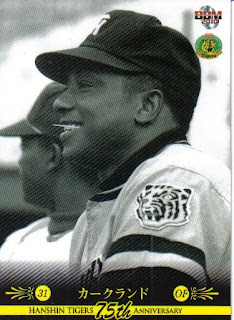 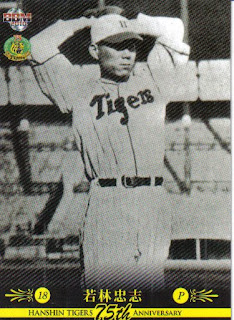 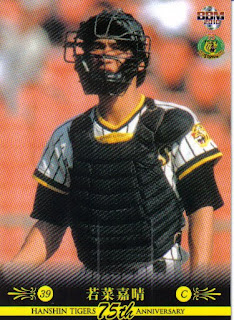 The set also contains 20 cards for the 2010 Tigers. Again, the selection is pretty much what you'd expect - Tomoaki Kanemoto, Kenji Johjima, Kyuji Fujikawa, Craig Brazell and Matt Murton all appear. One surprise - the set contains a card for Naoto Tsuru, who doesn't appear in either the 1st or 2nd Version sets this year. Here's the cards for Takahiro Arai (#86) and Tsuru (#80): 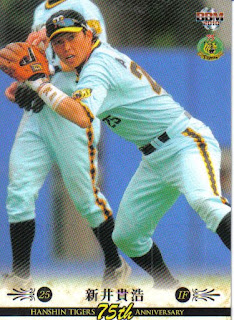 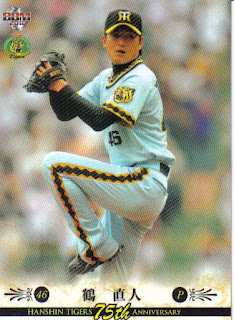 You've probably noticed that the fronts of the cards only have the player's name in Japanese, not in English. The backs are the same. So if you don't read Japanese, you may have issues in figuring out whose card you have.

The final subset is a seven card "Team Record Holder" subset. These cards (which are the only ones in the set to identify the player in English) show the career Tiger leaders in Games and Hits (Taira Fujita), Home Runs (Masayuki Kakefu), RBI (Fumio Fujimura), Stolen Bases (Norihiro Akahoshi), Games Pitched (Kazuyuki Yamamoto), Wins and ERA (Tadashi Wakabayashi) and Saves (Kyuji Fujikawa). Here's the Fujimura card (#95): 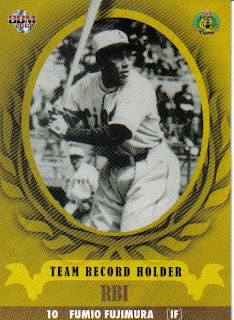