Well, this is a bit late as the set's been out for a couple months, but I'm finally getting around to writing about it. It's a 334 card set that (as usual) is numbered as a continuation of the 1st Version set. 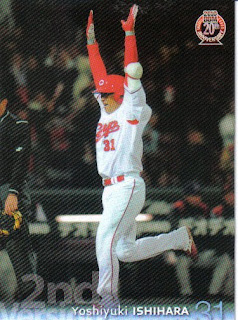 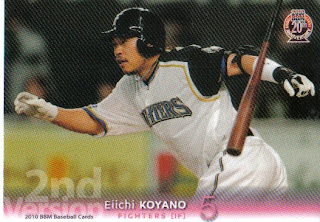 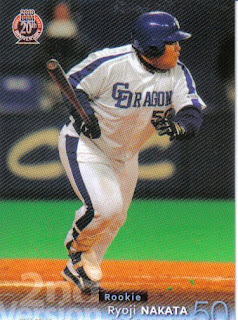 There's only a couple players this year who have a "regular" 2nd Version card but not a 1st Version card - Roberto Petagine (Hawks), Ken Nishimura (Tigers), Eric Stults (Carp), Go Kida (Buffaloes) and Shigeki Ushida (BayStars). In addition, Masayuki Hasegawa's card is with the Buffaloes while his 1st Version card was with the Carp. (Not sure why they did that rather than a 1st Version update) Here's the Petagine card (#665): 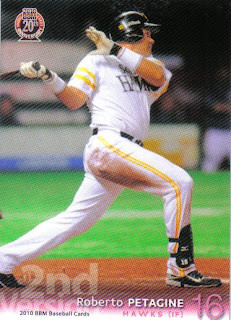 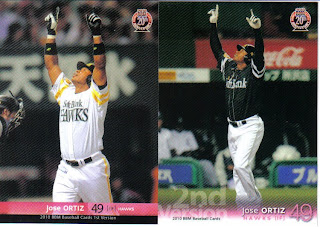 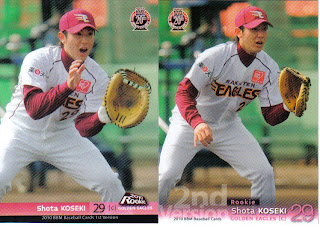 As always, there are several subsets in the set. There's a 36 card 1st Version Update subset featuring cards of players who either didn't appear in the 1st Version set for whatever reason or were traded early in the season (up to about May 17 it looks like). For the first time, BBM made sure that each team had an equal number of cards (3) in the update. Oddly enough, there's no card for the Swallows new manager Junji Ogawa, probably since he didn't take over until late May. Several of the updated players actually appeared in the 1st Version "Pickup Hope" subset but not in the regular set. Here are the cards of Freddie Bynum who signed with the Buffaloes too late to be in the 1st Version set (#763) and Yuji Yoshimi who was traded to the Marines from the BayStars in May (#760): 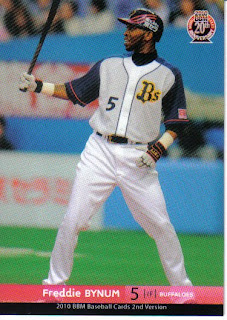 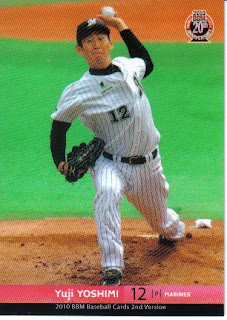 One of the traditional 2nd Version insert sets (Opening Game Pitcher) has moved into the regular set this year. This 12 card subset (called "Opening Pitcher") features the Opening Day pitcher for each of the 12 teams. Here's Kenta Maeda of the Carp (#770): 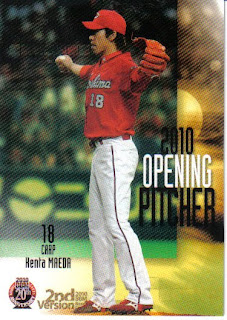 There's a 12 card "Twin Gem" subset that shows two players from each team. Not sure if there's a theme behind the selection of the players on the cards. The Carp card has the two Maeda's - Kenta and Tomonori - and the Buffaloes has two Okada's - T-Okada and manager Akinori. My favorite is the one for the Eagles showing both Masahiro Tanaka and Hisashi Iwakuma (#785): 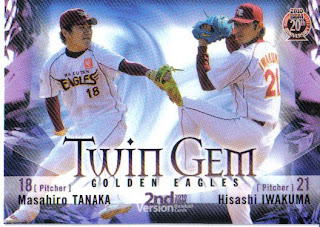 There's 12 team checklists which show a pitcher for each team batting. For a first, the player on the checklist is identified. Here's the Fighters team checklist featuring Yu Darvish (#796), one of four Yu Darvish cards in the set (Kenta Maeda also has four): 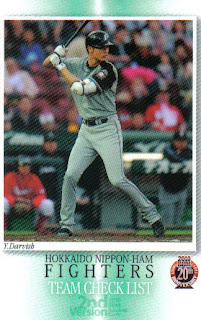 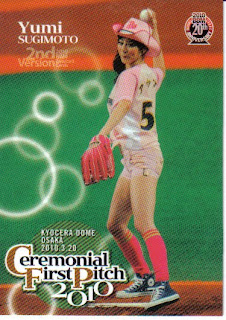 The final subset in the set is the 36 card (3 per team) "Cross Stream" cross set subset for BBM's 20th Anniversary. The plan is that each team will have three cards each in the 1st Version, 2nd Version and Touch The Game sets and six cards in their team set for a total of 15 cards. I was under the impression that some of the cards would be for OB players, but the cards in the 1st and 2nd Versions have been for active ones only. The front of each card features the image of the player superimposed over water splashing. The back of the card features the same image of the player in it's original setting. The back of the card is also in a design that is very similar to the 1991 BBM design. Here's the front and back of Motonobu Tanishige (#CS020 - note that they are not numbered as part of the 2nd Version set): 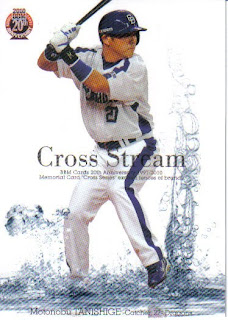 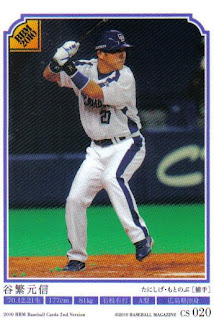 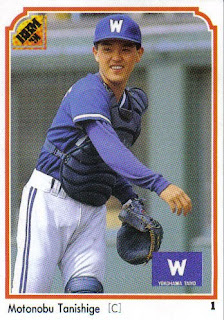