Card Of The Week December 12

Last week, Hisashi Iwakuma failed to come to terms with the A's, making him the first player to be posted to actually have been bid on by an MLB team but not sign with that team. He will return to the Eagles next season which means that his 2010 BBM 2nd Version card (#641) shown here is NOT his last regular card in Japan. 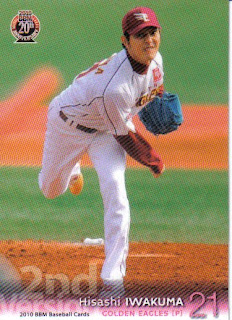 His last Japanese card will likely be in next year's 2nd Version set as he will have qualified to be an international free agent by next winter.
Posted by NPB Card Guy at 8:36 PM