Card Of The Week June 29 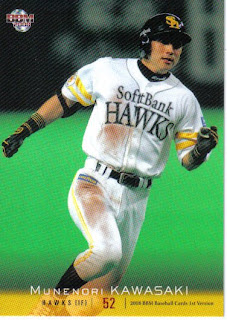 A few weeks ago, there was a discussion on japanesebaseball.com regarding Bikkuriman chocolate NPB seals. I had never heard of these before. They are apparently stickers with caricatures of Japanese players on them. The discussion has more details including a checklist and a link to the official website.
Posted by NPB Card Guy at 9:26 PM No comments: Card Of The Week June 15

For Father's Day, I thought it'd be appropriate to post this 1993 BBM card (#475)featuring Kazushige Nagashima and his father Shigeo. Kazushige was drafted in the first round by the Swallows in 1987 solely because of who his father was. He wore uniform number 3 (his father's number) while he was a Swallow. When Shigeo Nagashima returned as Giants manager in 1993, Kazushige joined the Giants and played for his father. 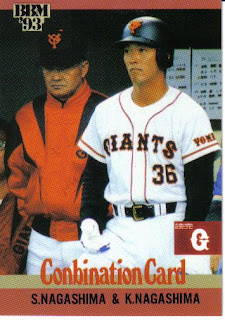 A Couple Things Of Interest

- Prestige Collectibles has their latest auction going on on-line here. Lots of cool stuff in addition to cards. I really like the foldout postcard of Jingu Stadium, home of the Swallows. I wonder what year the picture was taken.

- Prestige Collectibles is also releasing the latest (7th) edition of "The Japanese Baseball Card Checklist and Price Guide" in August. You can save a couple bucks by pre-ordering now.

- Upper Deck has put out a box set for the collegiate Team USA (not the Olympic team). In it, there are possible autograph and memorabilia cards for the Japanese collegiate All Stars. Kind of an odd thing to do and a bit pricey to try to collect, but if you're interested, they're out there (there's been a boatload of them showing up on Ebay).
Posted by NPB Card Guy at 8:32 PM No comments:

Card Of The Week June 8

Here's another card from that Ebay lot of 1940's color bromide cards I mentioned last week. I think that this is a card of pitcher Shigeaki Kuroo of the Tokyu Flyers from around 1947 or 1948, but I'm not sure of really anything about this card. The seller on Ebay had identified it as Kuroo (and I think the Kanji on the bottom right says that too), but that uniform doesn't quite match the Flyers uniforms from that time. I suppose that it's possible it's from 1949, but the coloring was done incorrectly. (I think these were hand-colored.)

Anyway, it's still a cool card. 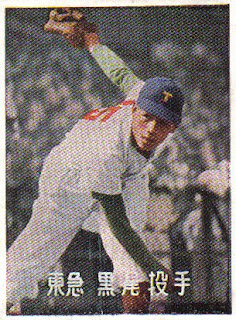 BBM's website has added information for the 2008 Giants and Carp team sets which should be out shortly. That brings the total 2008 BBM team set count to nine, leaving just the Dragons, Fighters and Lions left.
Posted by NPB Card Guy at 12:21 PM No comments:

Card Of The Week June 1

Here's an example of some detective work that guys like Gary Engel have had to do to figure out details about a card. I won a couple old bromide cards on eBay a few months ago. One of them was this card of Hall Of Famer Kaoru Betto. It's not in Engel's "Japanese Baseball Card Checklist and Price Guide" (or at least not the edition I have), so I don't know the manufacturer. Can I figure out at least what year this card is from?

I picked up a book last year that BBM published a few years ago called "The History Of Uniform" which shows every uniform worn in Japanese professional baseball from the 1934 to 2005. So checking the book, I see that the uniform in the picture was worn by the Tigers from 1945 to 1948. Betto only played for the Tigers in 1948 and 1949, so it looks like the picture at least is from 1948. 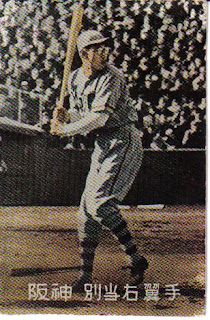