There was a new Lions box set added to BBM's website today. I think this is some sort of combination OB Lions/active Lions set. There are 24 cards in the set - I think that breaks down to 12 cards each for OB and active. Maybe a lineup (including DH), starting and relief pitcher and manager for each? Or am I completely wrong?

Well, whatever it is, it's going to hit the stores on August 9. Oh, yeah, and it contains memorabilia cards, so it'll be expensive.
Posted by NPB Card Guy at 8:17 PM No comments:

Only a day late this week!

Rich Gossage was inducted into the National Baseball Hall Of Fame yesterday. A little known sidebar to his career is the 28 games he appeared in for the (then) Fukuoka Daiei Hawks in 1990 (which accounts for the missing year in his American career stats). According to NPB Tracker, Gossage now joins Larry Doby as the only players with NPB experience in the MLB Hall Of Fame.

As far as I can tell, there are no cards of Gossage in a Hawks uniform. The main sets from 1990 in Japan were Calbee, Takara and Lotte and he's not in any of those sets. I guess that's not surprising since he didn't make his first appearence for the Hawks until July 4. The first batter he faced in Japan homered off of him - former Baltimore Oriole and then Kintetsu Buffalo Jim Traber. Ironically, the two had never faced each other during Traber's 4 years with the Orioles. So since I have no card of Gossage to show, here's Traber's 1991 BBM card (#287): 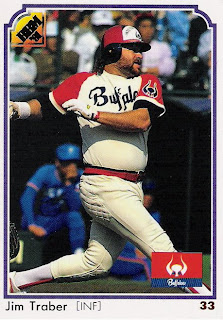 I got the information on Gossage's Japanese career from Japan Baseball Daily's Data Warehouse.
Posted by NPB Card Guy at 7:49 PM No comments: 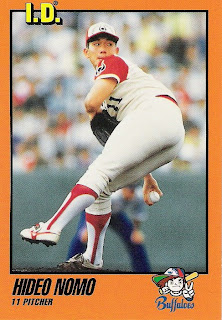 NPBTracker had a link to a YouTube video showing highlights from Nomo's first win in 1990 for Kintetsu against the Orix Braves.
Posted by NPB Card Guy at 8:59 PM No comments:

Sorry this is a little late this week.

On this date in 1964, Kokutetsu Swallows pitcher Masaichi Kaneda recorded his 4000th strikeout (and probably a couple others) against the Taiyo Whales. Here's his 1963 Marusho Menko card: 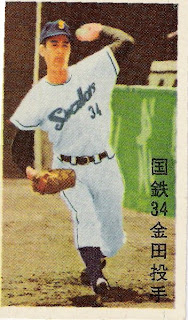 Thanks to Japan Baseball Daily's Today In Japanese Baseball History for the info.
Posted by NPB Card Guy at 8:52 PM No comments:

BBM today added information on their website for both the 2008 All Stars and 2nd Version sets. The All Star set has 65 cards and should hit the stores on August 9th. The 2nd Version set will be out on the same day. The set features 252 cards, 15 player cards per team plus a couple of subsets.

In other items of interest, Deanna Rubin had a post about the Lotte Bikkuriman stickers which included a picture of the ones she has. Also, the latest edition of Gary Engel's Japanese Baseball Card Checklist and Price Guide is now in stock.
Posted by NPB Card Guy at 10:04 PM No comments:

Information for the final BBM team set for 2008 - the Dragons - has been announced on BBM's web site. The set will hit the stores at the end of July.
Posted by NPB Card Guy at 7:07 AM No comments:

I was talking to someone this week about the upcoming Olympics and how former Orioles manager Davey Johnson was the manager of the USA baseball team. I brought up the fact that Johnson played for the Yomiuri Giants for two year (1975-76) and didn't have a very good time. Johnson was the first gaijin on the Giants for something like 15 years (I think the last before him was Wally Yonamine in 1960) and was taking over at third base from the guy who was now his manager - Shigeo Nagashima. Plus the Giants had just missed the Japan Series for the first time in 10 years. No pressure there. Robert Whiting's "You Gotta Have Wa" devotes part of a chapter to Johnson's experiences. I won't repeat it here, but suffice it to say that things did not go well.

Anyway, I was thinking that Nagashima was supposed to be the manager of the Japanese Olympic team in 2004, but had to bow out after suffering a stroke that spring. So I wonder if he hadn't had the stroke, he'd have managed the team this year as well, leading to an interesting backdrop to the Japanese-USA games. There's still a little interesting backdrop - according to Japan Baseball Daily, Johnson's first at bat in Japan resulted in a four pitch strikeout. The opposing pitcher? Senichi Hoshino, manager of the 2008 Japanese Olympic baseball team. 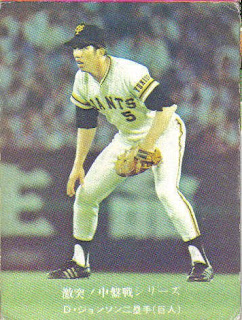 BBM is not the only card manufacturer in Japan, nor is it the oldest. Calbee has been continually producing baseball cards since 1973. 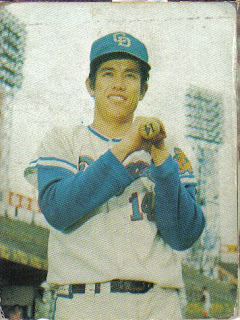 Calbee cards come one to a pack. Each pack is attached to a bag of potato chips (occasionally over the years there have been Calbee cards with other snacks). I can not imagine actually attempting to collect these by pack! (I got a bunch of cards in 2002 and 2003 from a friend in Japan - he said he had to quit after that because his wife was tired of their living room being filled with potato chips.) 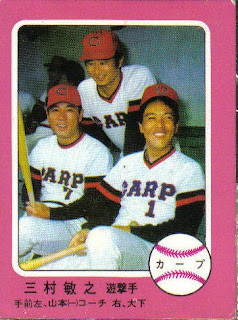 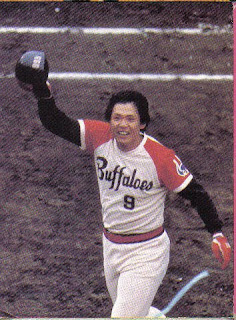 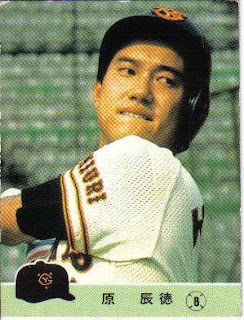 For the most part, Calbee cards had no player names in English until 1989. 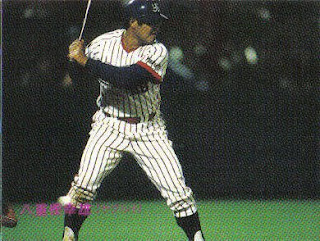 Most Calbee cards have featured a full bleed photo with minimal text on the front. Some exceptions to this are the 1975/76 "maroon bordered" subset (which kind of looks like the 1975 Topps set), the 1984 set and the 1990 "small" set. Up until 1990 cards would only have Japanese text on the front (if they had any). Starting with the 1990 "large" (phone-sized) cards (there were two different sizes in 1990), the names and later teams of the players would appear on the front in English. The card fronts seem to have pretty much standardized over the last 10 years to show the name (usually first initial and last name), team, team logo and uniform number. 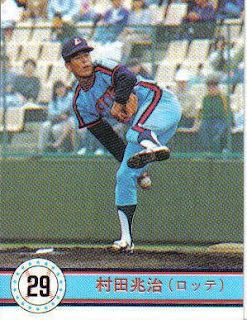 Personally, I really love getting old (pre-1990) Calbee cards. The main and somewhat obvious reason is that if you want any cards from before BBM starting making them (1991), Calbee's your best option. They're also undeniably Japanese - there are no bones thrown to people like me who can't read the language. There's a lot of interesting little subsets (Nippon Series, monthly MVPs - the 1985 set featured a bunch of cards with portraits of the player drawn by fans) and the photography is extraordinary. 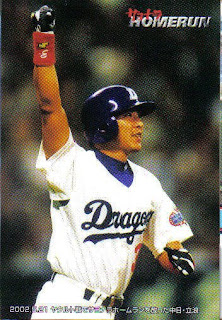 The more recent cards have interesting subsets as well - Best 9, All Stars, Sayanora Home Runs, Title Holders, etc. The 2001 set featured an 8 card subset for the 2000 Olympic team. The 2002 set celebrated the 30th year of Calbee cards with a subset featuring reprints of the rookie cards of a number of players. I'm guessing that Calbee puts more energy into the subsets because they'd be completely overshadowed by BBM otherwise, but I could be wrong. 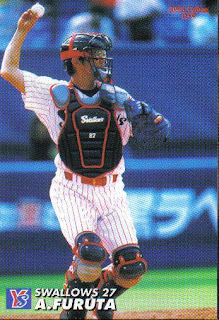