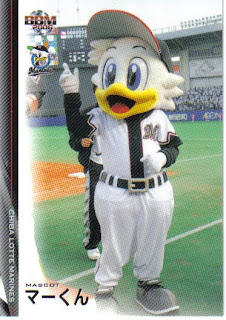 Last weekend, I went to a baby shower for some friends of ours who are about to have a baby (well, I guess that's kind of obvious, huh?) Anyway, I was surprised to see that one of the co-workers of my friends who was there was wearing a Chiba Lotte Marines t-shirt. So, of course, I had to ask him about it. Turns out, a friend of his gave him the shirt and he really didn't know anything about the team. (And everyone else looked at the shirt and at first glance thought it said "Mariners", not "Marines").

Poor guy - he threw the shirt on that morning, not realizing he was going to be quizzed by a crazy Japanese baseball fan. I suspect he'll think twice about wearing it in public again.

OK, for Father's Day, I was considering driving up to Lancaster, PA, catching a Barnstormers game and maybe trying to get an autograph from Toshihisa Nishi. Unfortunately, Nishi retired a couple of weeks ago, so we went and saw "Toy Story 3" instead. 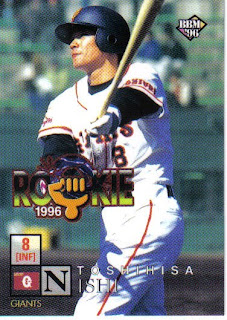 Ever since I started this blog, I would occasionally get people posting comments that were essentially ads for cards they were selling. Since I kind of viewed that as a sort of spam, I started moderating the comments (well, that was one of the reasons I started but it was also because of the real spam) and rejecting most of these comments. But the more I've been thinking about it lately, the more I think that was a mistake.

One of the reasons that I started this blog was to reach out to collectors of Japanese baseball cards living in the States. What better end could this blog serve than to give those collectors a spot to connect and buy/sell/trade cards among themselves?

1. Only Japanese, Korean and Taiwanese cards

2. I will accept no responsibility for anyone else's behavior. I'm not planning on rating buyers and sellers or banning anyone from posting. There's a whole other site out there that does that better than I ever will.

3. Only leave these comments on the swapmeet posts.

This might be stupid idea. This might be a great idea. I don't know, but I figure it's worth trying. Hopefully, I won't make too many people angry. We can modify things as we go or just abandon the whole thing if it's not working. And I'm open to any suggestions that anyone has.

Anyway, I'll list what I'm looking for and what I've got to trade and sell:

I'd also like to find the 2002 BBM Japanese National Team box set.

What I've got for sale or trade:

I can be reached at npbcardguy@gmail.com.

I'm going to publish two comments here that I've been holding in limbo for a month or so. I apologize to the original posters, but it's taken me a while to decide what I wanted to do.
Posted by NPB Card Guy at 8:58 PM 9 comments:

...and Deanna Rubin has the pictures to prove it.
Posted by NPB Card Guy at 8:55 PM No comments:

Card Of The Week June 13 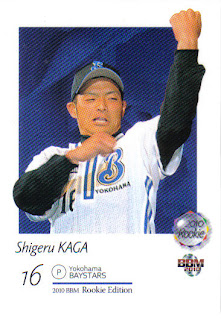 I'm going with playing "air fiddle" while listening to "The Devil Went Down To Georgia".
Posted by NPB Card Guy at 8:51 PM 1 comment:

I'm playing catchup on BBM's sets so far this year...

Back in February, BBM published their annual Rookie Edition set. This set contains cards of players taken in last fall's NPB draft (the 2010 draft, even though it took place in October 2009). The set contains 114 cards, 81 of which are for players taken in the draft (including this year's hot prospect - Yusei Kikuchi). I've mocked this set in the past for being made up primarily of pictures of guys wearing uniform jerseys of their suits doing "guts" poses - one hand raised with a clenched fist. While this year's poses do include a lot of these, there seems to be a little more variety than in the past. There are a lot of guys doing pantomime pitching and batting, several guys with both hands raised, and a couple that I'm not exactly sure what they're doing. And then there's Takehiro Fukuda of the BayStars doing this (card #046): 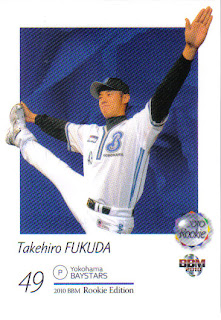 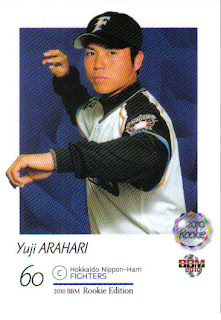 There are some straight, normal poses in the set, like this one of Yusei Kikuchi (#067): 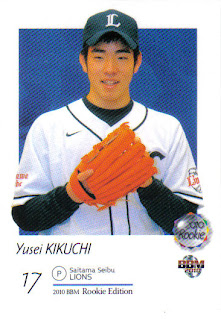 The set also contains 24 cards of current players (2 per team) showing pictures of them when they were rookies. Here's Shingo Ono's card (#102): 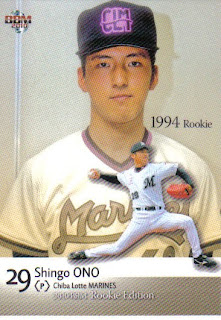 There's also a five card subset (which look vaguely like the 1992 Upper Deck set) showing each of the new team managers as they appeared as players. Here's BayStars manager Takao Obano from when he was with the Swallows (#107): 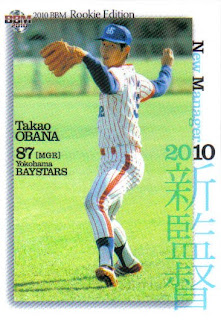 Finally, there are four cards for players who changed teams over the winter - Shugo Fujii, Kenji Johjima, Kimyasu Kudoh and Naoyuki Shimizu. Here's Johjima's card (#112), featuring him in a "guts" pose: 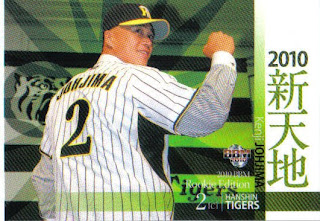 On the heels of last fall's very popular All Japan Baseball Foundation 15th Anniversary set, Epoch has released a second set. This set is an 83 card box set containing 82 "regular" cards and an autograph card - as usual, I got a set without the box or the autograph card. The card numbers start at 77 so that they are numbered in sequence with the first set (1-76).

Like the first set, it's an eclectic group of players. Shigeo Nagashima and Sachio Kinugasa are the biggest names in the set. The set contains players who played in the 1930's (Shigeru Chiba) as well as guys who just retired recently (Ken Suzuki, Shigeki Sano, Tomohiro Kuroki). Here's a (somewhat) translated list of players. Like the first set, since I don't know what the criteria was for including a player in the set, I can't say if there was someone obvious excluded. I will point out that neither set contains either Masaichi Kaneda or Katsuya Nomura - I'd venture a guess that these are the two biggest names who are not in either set.

The cards have the same design as the first set. There's a smattering of black and white photos in the set, primarily for the older players but occasionally for someone more recent (Shinji Hata). Here's some examples - the cards of Shigeo Nagashima (#79), Yasumitsu Toyoda (#145) and Shigeru Chiba (#77): 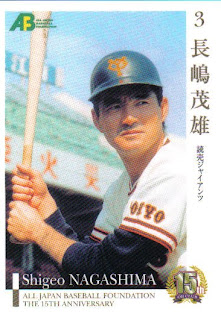 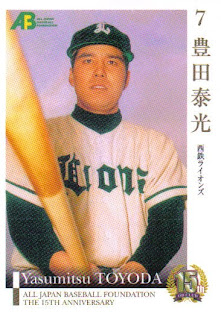 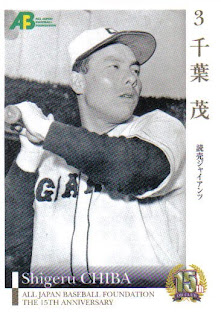 Like the first set, I'm not really sure what to make of this set. The two sets together still aren't a particularly good overview of Japanese Baseball History (although a much better representation than BBM's NPB 70th Anniversary set in 2004). They're OK, but I'm not sure I'll pick up a third set if Epoch makes one.
Posted by NPB Card Guy at 6:55 PM 8 comments:

BBM announced the 2010 Dragons team set (the final team set for the year) last week. Like most of the rest of the team sets, there are 99 cards in the set - 76 cards of the players, coaches and managers, one checklist card, four cards for "promising young" players, nine cards for a puzzle subset, three cards for the "BMW" trio (which I think are Blanco, Morino, Wada maybe? - the three, four and five hitters in the Dragons lineup - although not in that order) and six cards for the Cross-Stream cross set BBM 20th Anniversary subset. There's a nine card insert set featuring "key players" and some possible autograph and 3-D cards. The set will be released on July 23.
Posted by NPB Card Guy at 3:00 PM 4 comments: 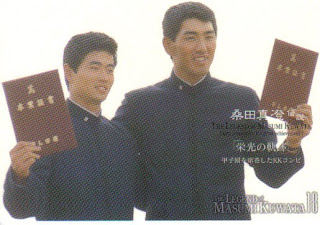 This is card #MK04 from the 2007 BBM Legend Of Masumi Kuwata set, showing Kuwata and Kazuhiro Kiyohara's graduation from PL Gakuen High School in 1985.

My oldest daughter graduates from high school today and I couldn't be prouder. Congratulations to her and the class of 2010.
Posted by NPB Card Guy at 2:48 PM No comments: