I discovered the other day that one of the 2009 inductees to the International League Hall Of Fame was former Yakult Swallow and Yomiuri Giant star Roberto Petagine.

Petagine was originally signed out of Venezuela by the Astros in 1990 and worked his way through their system, briefly reaching the majors in 1994 before being traded during the off season to the Padres in the big 12 player trade in the middle of the strike. After one season in the Padres organization, he was traded to the Mets and spent most of the next two seasons at Norfolk, their AAA team in the International League. He was the International League's MVP in 1997, but the Mets had John Olerud at first, so that winter they traded him to the Reds. He won a second International League MVP at Indianapolis in 1998, becoming the first player ever to win back-to-back MVPs in that league. Unfortunately, winning back-to-back MVPs in the same minor league is a strong hint that you're not going to move up (because if you were, you'd have moved up after the first MVP award) so that winter, Petagine agreed to let the Reds sell his contract to the Yakult Swallows.

He ended up playing six seasons in Japan - four with Yakult and two with Yomiuri. He won the Central League MVP in 2001 when he helped lead the Swallows to the Nippon Series Championship. He hit 223 home runs (leading the league in 1999 and 2001) and batted .317. He replaced Hideki Matsui in the Giants lineup in 2003, moving to the outfield after playing mostly at first for the Swallows (Kazuhiro Kiyohara was playing first for the Giants at this point). 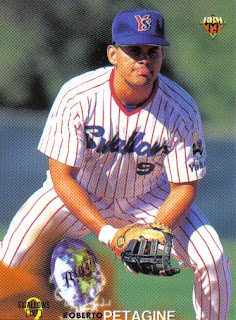 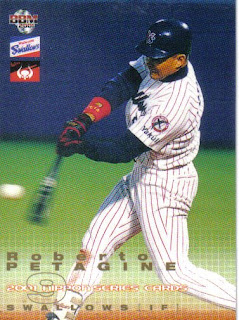 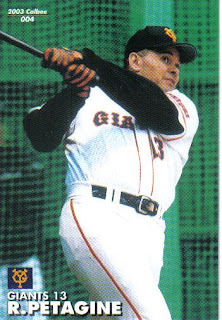 The International League Hall Of Fame is having induction ceremonies at various ballparks this summer. The schedule is here. Petagine's induction has not yet been scheduled.
Posted by NPB Card Guy at 5:50 PM No comments:

Card Of The Week June 28 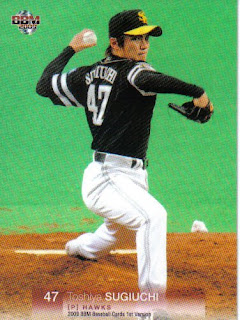 According to this, on Wednesday, Pepsi bought 20% of Calbee (in return for Calbee taking over Frito-Lay in Japan). I don't expect that there will be any change in the baseball cards Calbee produces (unless they start giving them away with Frito's corn chips), but I thought it was of interest.
Posted by NPB Card Guy at 1:28 PM 2 comments:

OK, last week BBM put up information about this year's 2nd Version set on their website. The set will be released in early August.

Unusually for BBM, they don't actually have a complete count of what's going to be in the set, so I can't say how many cards are going to be in the set. What I do know is that there will be 180 "regular" cards (15 per team), a 12 card subset of "participation players", a 12 card "rookie" subset and a 12 card "veteran" subset (each of these three subsets has one card per team in them), and 12 team checklist cards. There will also be a 1st Version update subset of too be determined size featuring players traded since 1st Version went to press (like Ryuji Miyade), guys who signed more recently (Craig Brazell maybe?) and guys who simply didn't appear in 1st Version (Edgardo Alfonzo?). There's also another undetermined size subset that I think is the first pitch ceremony subset that's been a staple of the 2nd Version set for the last few years.

There will also be insert sets featuring the leading pitcher and leading batter for each team as well as the usual memorabilia/autograph inserts.
Posted by NPB Card Guy at 8:15 PM 2 comments:

Card Of The Week June 21 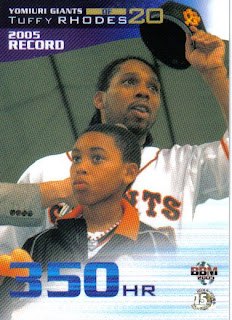 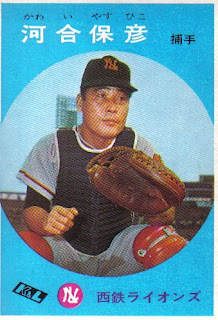 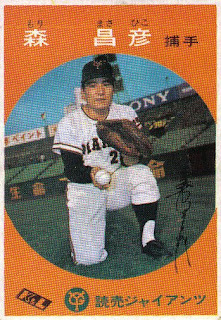 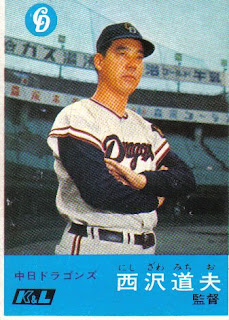 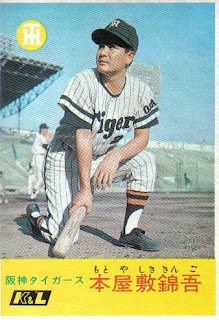 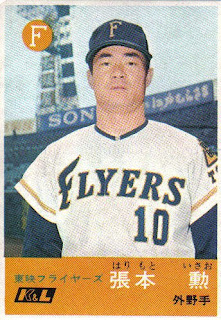 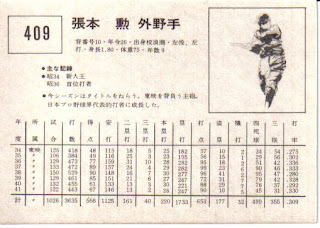 This set is very popular - bidding on eBay for the cards can get quite heated.
Posted by NPB Card Guy at 6:42 PM No comments:

Card Of The Week June 14 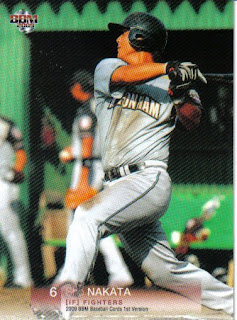 Via NBP Tracker, you can vote on line for the NPB All Star game(s) here.

And speaking of the All Star Games, BBM released information on their website today about this year's edition of their annual All Star set. The 65 card box set will be released in July. It contains cards of each player on the rosters of the teams (28 on each league's team) plus cards of the manager and coaches (3 for each team). It also contains a card for the player who received the most votes as well as the MVPs from the two games from 2008 (Takeshi Yamasaki and Masahiro Araki). The webpage does not yet show what the cards will look like - I'm hoping that they're an improvement over last year's set.
Posted by NPB Card Guy at 9:37 PM No comments:

The 2009 BBM 1st Version set has been out for about a month and half now. I just got mine last week. It's basically a typical BBM "regular" set. For the most part I like the set but there's a couple things I thought could have been better. The set contains 554 regular cards along with a couple insert sets (including the standard Best 9 and Golden Glove sets) and assorted memorabilia/autograph cards.

There are 36 "regular" cards (including the manager) for each team. As has been typical for BBM the last few years, the fronts of these cards feature beautiful full bleed photos. Here's a couple example cards of Norihiro Nakamura (#169), Takuya Kimura (#234), Shunsuke Ishikawa (#265), Ryosuke Hirata (#313) and Munenori Kawasaki (#203): 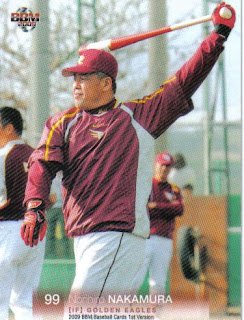 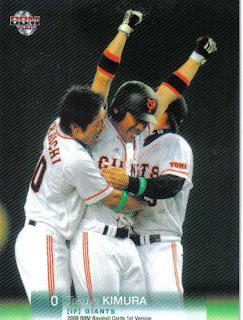 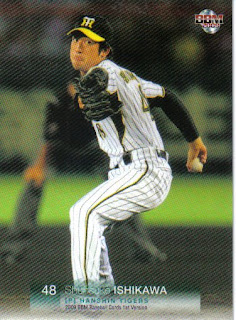 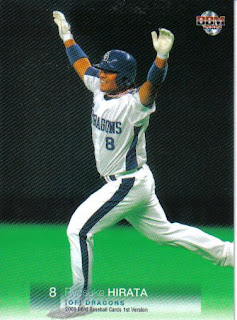 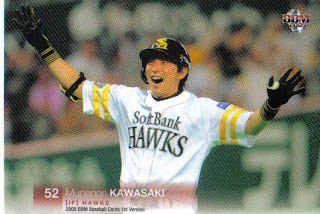 I was somewhat surprised that BBM did not get pictures of many of the Lions and BayStars players in their new uniforms. I've always felt that BBM was really good about having up-to-date photos in their sets and this is the first time I've noticed this much of a mismatch. It may simply be that since the Lions and Baystars uniforms are so obviously different that it stands out more this year than others.

Instead of featuring amusing candid photos as has been the case lately, this year's team checklists show the team's mascots. I was kind of disappointed by this as I had been enjoying the checklist photos lately. And the mascot theme was used back in 2000. Here's the Marine's checklist (#546): 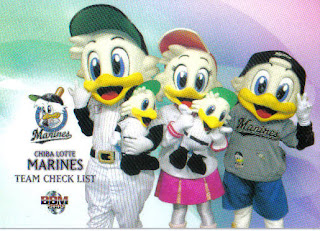 As usual, the set contains a subset featuring last years statistical leaders and award winners along with a card for the Nippon Series Champion Lions. This subset has 32 cards this year, and includes multiple cards for some players who either led the league in multiple categories or won multiple awards. The cards themselves feature a smaller than normal photo surrounded by a thick faux wood paneling border. I have to say that I don't think much of the design. Here's the Hold Points leader card for the Tigers' Tomoyuki Kubota (#459) as an example: 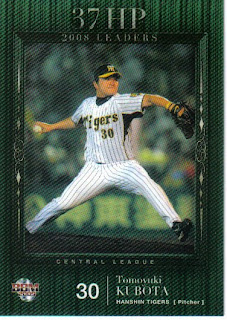 There is a 12 card "2008 Record Making Players" subset featuring a card for each team commemorating some historic event in 2008. This includes Alex Cabrera's 300th home run, Kazuhisa Ishii's 100th win and Tomoaki Kanemoto's 2000th hit. Some of these, however, I have no idea what they're for - especially the card of Carp manager Marty Brown, who did something of note on April 26th last year. Here's the card commemorating Masahiro Yamamoto's 200th career win (#473): 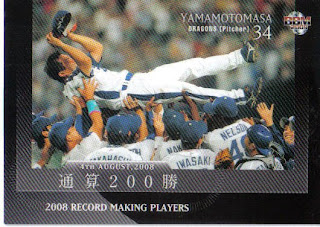 The set also contains a 24 card subset entitled "Rookie Of The Year Preview". This subset features two players from each team that BBM feels could be a possible Rookie Of The Year. They had a similar subset last year that contained neither of the actual winners, so one might question their selections. Here's the card of Keijiro Matsumoto (#500): 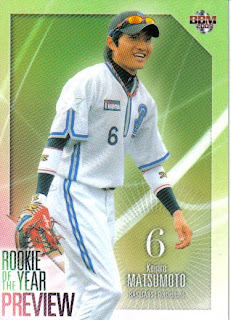 The next subset in the set is the 24 card "Game Masters" set. As you can probably guess, the 24 cards means that there are two cards per team. In this case, there's a pitcher and batter represented from each team. I typically don't go in for these kind of cards much, but I have to say that this is a pretty attractive subset. Each card features an action shot of the player in the foreground with a zoomed in closeup of his face from the same shot as the background. The subset contains a pretty good collection of players as well, including Yu Darvish, Hisashi Iwakuma, Tuffy Rhodes, Nobuhiko Matsunaka, Michihiro Ogasawara, Norichika Aoki and Seiichi Uchikawa. Here's the Shunsuke Watanabe card (#507): 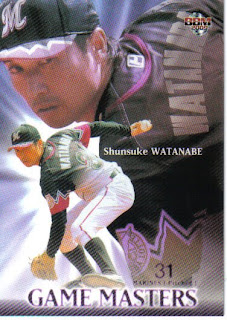 There's a nine card "Trading Team" subset that features nine players who were traded or signed with new teams over the winter. I have to say that I found this subset to be pretty worthless. Besides the fact that they obviously already had cards of these guys with their new team in the regular cards, the subset repeats a subset from this year's Rookie Edition set. That set included cards for Takuro Ishii, Norihiro Nakamura, Tomohiro Nioka, Toshihiro Noguchi and Takayuki Shimizu. All five of these players appear in this subset as well, along with Makoto Kosaka, Arihito Muramatsu, Michael Nakamura, and Naoyuki Ohmura. Here's Noguchi's card (#533): 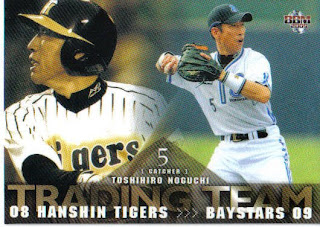 The final subset of the set is the 9 card "The Last Appearance" set. These cards feature players who retired last season, including Kazuhiro Kiyohara and Takanori Suzuki. Unlike some of the previous years, only players are included rather than coaches or managers so Sadaharu Oh is not here. Most of the players are shown either being tossed in the air by teammates or smiling and waving to the crowd. The lone exception is this card of Hiroyuki Takagi (#534), who looks like he's about to be handed a blindfold and a cigarette: 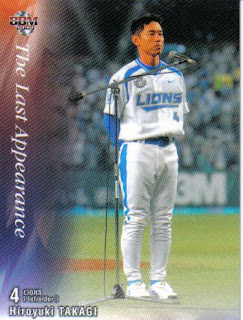 Card Of The Week June 7 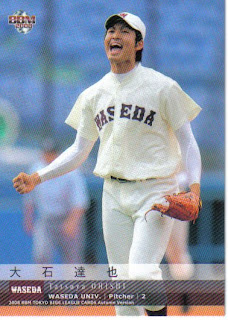