My final retirement post for this offseason is for former Hanshin Tigers and Chiba Lotte Marine infielder Takashi Toritani.  I previously did a post for Toritani about 4 1/2 years ago when he reached 2000 hits so I'll just kind of repeat and update what I wrote then.
In fact, I need to correct something - in that post I erroneously said that Toritani was the Tigers' fourth round pick in the 2003 draft out of Waseda University.  He actually was essentially their first pick - he and the Tigers agreed to a pre-draft deal as part of the "free acquisition frame" of the draft.  He took over as the starting shortstop for Hanshin in 2005 and didn't miss a game for them for the next 13 years.  He was a seven time All Star (2005-06, 2012-15, 2017) a six time Best 9 award winner (2008, 2010, 2011, 2013-15) and a four time Golden Glove award winner (2011, 2013-15).  He played in the Nippon Series twice, losing to the Marines in 2005 and the Hawks in 2014.  He was a member of the 2013 World Baseball Classic Japanese team and had a critical stolen base in the ninth inning of their game against Taiwan that put him in position to score the tying run on Hirokazu Ibata's single.
After a poor 2019 season, he and the Tigers parted ways and he signed with the Chiba Lotte Marines.  He played sparingly over the next two seasons, didn't hit very well and announced his retirement at the end of October.  He'll be a baseball commentator on TV this season.
Toritani's first BBM cards are from the 2004 Rookie Edition (#40) and 1st Version (#213) sets while his first Calbee card was #055 from the 2005 Series One set.  Here's a bunch of his cards - I purposely picked ones that I didn't show (or like the Rookie Edition card didn't have) in the previous post I did for him:

On Wednesday of last week two teams in the independent American Association announced they had each signed a former Hokkaido Nippon-Ham Fighter.  The Cleburne Railroaders signed Oswaldo Arcia while the Lake Country DockHounds signed Daikan Yoh (aka Yang Dai-kang).  Arcia spent 2018 with the Fighters.  Yoh is from Taiwan but went to high school in Japan so he was subject to the NPB draft.  He was the Fighters first round pick in 2005 (beating the Hawks in the lottery for his rights) and played for them through the 2016 season.  He signed with the Yomiuri Giants as a free agent in 2017 and has spent the last five years with them.  He played on the Taiwanese National Team for the 2006 and 2013 World Baseball Classics and the 2015 Premier 12.
Here are cards of each of them with the Fighters:

Yuya Hasegawa of the Fukuoka Softbank Hawks retired at the end of last season.  Hasegawa was drafted by the Hawks in the fifth round of the 2006 draft out of Senshu University.  He struggled with some injuries his first couple seasons - completely missing 2007 with a neck fracture and the last month or so of 2008 with a broken finger.  Given a chance to play regularly in 2009 he responded by hitting .312.  He was pretty much a regular starting outfielder for the Hawks over the next few years.  He had probably his best year in 2013, leading the Pacific League in batting with a .341 average and in hits with 198 and winning a Best 9 award.  He suffered an ankle injury towards the end of 2014 which ended up costing him a lot of playing time the following season.  He was a regular again in 2016 but after that injuries and ineffectiveness started to limit his time on the ichi-gun team.  This didn't keep him off the Hawks Nippon Series rosters, however, as he won seven championships with the team (2011, 2014-15 and 2017-20).  He also was named to four All Star teams (2009, 2013-14 and 2016).  He'll be a coach for the Hawks this season.
Hasegawa's first BBM cards are (of course) from the 2007 Rookie Edition (#23) and 1st Version (#107) sets.  His first Calbee card wasn't until 2009 though - #247 in the Series Three set.  Here's a bunch of his cards:

Longtime Chunichi Dragons outfielder Atsushi Fujii is another player who retired at the end of 2021.  Fujii had been playing for NTT West in the corporate leagues when the Dragons made him their third round pick in the college/corporate league player portion of the 2005 draft.  He spent much of his career with the Dragons as a backup outfielder.  As far as I can tell, he only really was a regular in maybe two seasons - 2009 and 2017.  He did get to play in four Nippon Series with the Dragons though - 2006-07, and 2010-11.

The news broke last week that former Tohoku Rakuten Golden Eagles and Chiba Lotte Marines pitcher Frank Herrmann had taken a job with the Toronto Blue Jays' front office.  Herrmann joined the Eagles in 2017 after eleven seasons in the Indians, Pirates, Angels and Phillies organizations including stints in the majors with Cleveland and Philadelphia.  He put up pretty good numbers in three years in Sendai, including a 2018 season in which he posted a 1.99 ERA with 18 saves.  He moved south to Chiba for the 2020 season and put up good numbers in middle relief that year.  2021 didn't go as well though and he and the team parted ways after the season ended.  His record for his five years in Japan was 14-10 with a 3.02 ERA.  I believe he's the only Harvard graduate to play in NPB.

Here's a card from each year he played in Japan:

Another player who announced their retirement at the end of last season was long time Hiroshima Toyo Carp and short time Chiba Lotte Marine utility infielder Tetsuya Kokubo.  Kokubo attended high school at baseball powerhouse PL Gakuen and went on to attend college at Aoyama Gakuin University.  He was a star in college, winning four Tohto League Best 9 awards and leading the league in batting with a .373 average in the 2007 spring season.  He earned a spot on the Japanese collegiate national team that played in the USA-Japan Collegiate Baseball Championship in North Carolina that summer (and like Yuki Saitoh ended up with a card in Upper Deck's USA Baseball set the following year).

He was Hiroshima's third round pick in the college/industrial league portion of the 2007 draft and made his debut with the top team the following April.  To some degree I think Kokubo spent most of the early years of his career unsuccessfully trying to establish himself as a starter at one of the infield positions but almost always either losing out to another player (Eishin Soyogi, Takuro Ishii, Kenta Kurihara, Brian Barden, Shota Dohbayashi, Ryosuke Kikuchi), not playing well or getting injured.  His personal highs in both games played and plate appearances occurred in his first season (98 games, 316 plate appearances) and he spent a good deal of each season with the farm team.  He was versatile enough to play all four infield positions and the Carp kept him around for 13 seasons as a late inning defensive replacement/pinch hitter.

He and the Carp parted ways after the 2020 season and he started the 2021 season with the Hinokuni Salamanders of the independent Kyushu Asia League.  It was the inaugural season for both the team and the league.  Kokubo hit .421 in 18 games with the Salamanders, attracting the attention of the Chiba Lotte Marines who signed him to a contract just before the deadline for teams to add players who would be eligible for the playoffs (which was the end of August).  He started September on the Marines' ni-gun team and sizzled there, hitting .471 in five games.  He was promoted on September 9th and made a big splash in his first game with Lotte, hitting a solo home run against the Buffaloes.  Unfortunately that ended up being his only hit with the Marines.  He ultimately had 18 at bats over seven games and hit a lowly .056.  He announced his retirement at the end of October and will be a coach for the Carp this season.

After eleven seasons Wladimir Balentien is leaving NPB and Japan.  The Saraperos de Saltillo of the Mexican League announced that they had signed him last week.  Balentien led the Central League in home runs his first three years in Japan, culminating in his record setting 60 home run season in 2013.  He also led the CL in RBIs in 2018.  He won the CL MVP award in 2013, won Best 9 awards in 2012 and 2013 and made the All Star team six times (2011-14, 2016 & 2018).  After spending his first nine years in Japan with the Swallows he signed with the Hawks as a free agent and spent the past two years mostly on the Hawks' farm team in Chikugo.  It was a little surprising that he didn't sign with another Japanese team after he and Hawks parted ways as he's been in Japan long enough that he no longer counts as a foreign player.

Here's a 2014 Calbee card (#C-1 from the Series One set) celebrating his 60th home run of the 2013 season - this was on October 4th, about two and a half weeks after he hit home run number 56 to pass Sadaharu Oh as the single season leader: 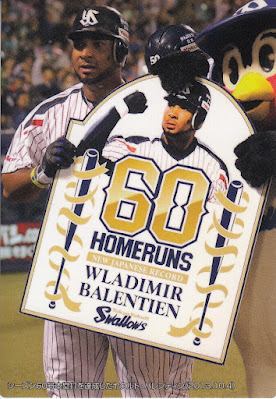 Hanshin Tigers pitcher Minoru Iwata retired at the end of last season.  Iwata attended baseball powerhouse Osaka Toin for high school and was a teammate of Takeya Nakamura and Tsuyoshi Nishioka there.  He was named the ace pitcher of his team by his junior year but missed opportunities to pitch much due to a back injury and the discovery that he suffered from Type 1 diabetes.  He had hoped to go into professional baseball after graduating from high school but went undrafted in the fall 2001 NPB draft.  He went to Kansai University and went 6-10 with a 2.11 ERA and 143 strikeouts in 23 games over four injury-plagued seasons.  Former Hankyu Braves pitcher Takashi Yamaguchi who was a scout for the Tigers and an alum of Kansai University recommended that Hanshin draft him.  The team actually acquired him via the "desired enrollment frame" part of the 2005 draft which basically allowed them to sign him to a deal without other teams getting a shot at drafting him - the process cost the Tigers their first and second round picks in the college/industrial league portion of the draft.
Iwata spent most of his first two seasons with the Tigers on their farm team, making only one appearance with the top team in 2006 and four in 2007.  He made the ichi-gun starting rotation in 2008 and went 10-10 with a 3.28 ERA in 27 starts and finished third in Rookie Of The Year voting behind Tetsuya Yamaguchi and Hayato Sakamoto.  He was a late addition to the 2009 Japanese World Baseball Classic team, replacing Hiroki Kuroda.  He only made two appearances in the tournament, both against Korea, but hurt his shoulder and missed a couple months of the season.  An elbow injury sidelined him for all of 2010 but he returned to the Tigers starting rotation in 2011 and remained there for the next five seasons, starting at least 20 games each season except for 2013 where ineffectiveness limited him to only nine games with the top team.  He started Game Four of the 2014 Nippon Series and held the Hawks to just two runs in seven innings in a game ultimately won by Softbank on a three run walk off home run by Akira Nakamura in the bottom of the tenth.  His playing time on the top team dropped off quite a bit after 2015, apparently due to poor performance.  He announced his retirement after the team had let him know that he wasn't in their plans for 2022.  He's now working for the team as a "community ambassador".
Iwata's first baseball cards were in the 2006 Rookie Edition (#55) and 1st Version (#248) sets from BBM.  His first Calbee card was #116 in the 2008 Series Two set.  He's also appeared in various sets from Konami, Bandai and Epoch.  Here's some of his cards: