Card Of The Week December 19

Former Giants pitcher Toru Murata signed a minor league deal with the Indians this past week. I thought about doing a "New Import" entry for him, but he doesn't have that many cards (and I only have one!). He's got a card in the 2008 BBM Rookie Edition set (#4) and his rookie card (and only "regular" BBM card) is #034 in the 2008 BBM 1st Version set (shown below). (Hmm, I guess he and not Nishioka is the first Japanese player who had a draft pick card in a Rookie Edition set to sign with a US team...) I expect he has cards in the BBM Giants sets from 2008 on, but I don't have a checklist for those sets. 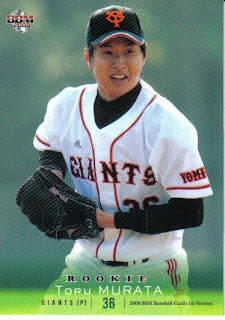