Last summer, BBM celebrated the 60th Anniversary of the team that is now the Saitama Seibu Lions by issuing yet another 99 card anniversary set. The Lions began life in 1950 as the Nishitetsu Clippers in the newly created Pacific League and played their home games in Fukuoka. In 1951, they merged with a Central League team called the Nishi-Nippon Pirates (who had also begun play in 1950) and were renamed the Nishitetsu Lions. The Lions were very successful in the late 1950's, winning three straight championships from 1956-58, but became less successful as the 1960's wore on. Following the 1972 season, the team was sold to an organization called the Fukuoka Baseball Corporation who sold the naming rights for the team to a resort and golf course developer, resulting in the team being renamed the Taiheiyo Club Lions for the next four years. Crown Gas Lighter took over the naming rights in 1977 and 1978, causing the name to change again to the Crown Lighter Lions. Following 1978, the team was sold to the Seibu corporation and moved the team to Tokorozawa, Saitama. The newly renamed Seibu Lions became the dominant team in Japan from the early 80's until the mid 1990's, winning eight championships between 1982 and 1992 (and appearing in 13 between 1982 and 1998). In 2008, the team added their prefecture to their name, becoming the Saitama Seibu Lions.

This anniversary set is a little different than the others that BBM has done. Typically, the sets have three to four subsets - six or seven cards for team history, 50-70 cards for OB team members (either retired players or active former team players), and 18-27 cards for the current team. Sometimes there's an additional subset (between six and nine cards) showing team statistical leaders.

With this set, however, BBM decided to mix it up a little bit. There's still a six card "History Of Lions" subset (with one card devoted to each decade). Here's the card for the 1970's (#03): 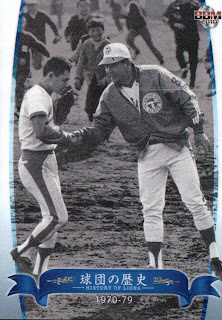 Instead of a subset devoted exclusively to OB players, this set has a 54 card subset labelled "Lions 1950-2010" that includes a couple active Lions players in it (Takayuki Kishi, Takeya Nakamura and Hideaki Wakui). The player selection is very heavy on the Seibu era (including Daisuke Matsuzaka and Kazuo Matsui), but there are a decent number of players from the Nishitetsu years, with a couple even in color. As you might expect, there's some significant overlap between this set and the two Lions sets done in 2008. There's only one Crown Lighter Lion (Yoshiie Tachibana) included and I was somewhat disappointed that there were no Clippers or Pirates included. Here's a smattering of cards from this subset - Hiromi Wada (#17), Futoshi Nakanishi (#11), Yoshii Tachibana (#20), Koji Akiyama (#29) and Hideaki Wakui (#59): 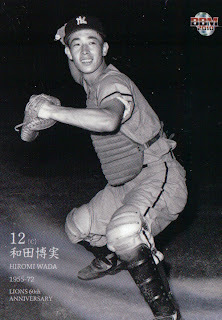 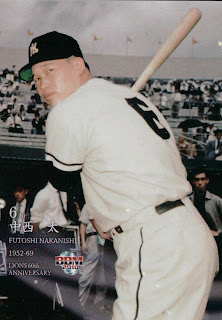 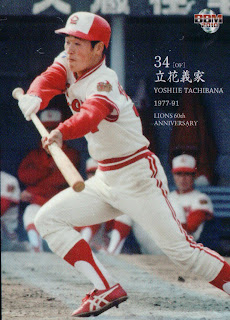 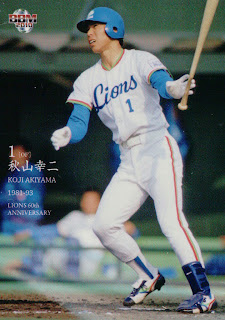 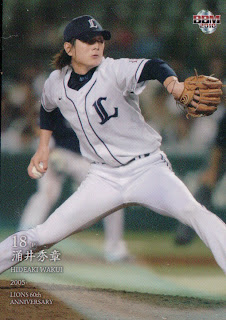 I was confused when I first was first going through the set and saw that there were no cards for the Taiheiyo Club Lions and no card for Kazuhisa Inao in the previous subset. But then I hit the next subset where the first card was this one of Inao (#61) and all was made clear: 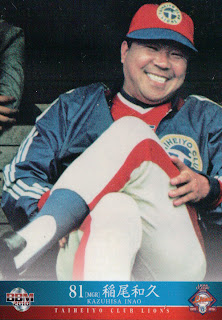 The set contains a 25 card subset devoted to the Taiheiyo Club Lion years (1973-1976)! This was totally unexpected to me (although it is exactly what BBM said they were doing - I just assumed that I knew better). BBM decided to have a card of Inao from his managing days (he managed the Lions from 1970 to 1974) rather than his playing days. Among the other players who appear in this subset are Masahiro Doi, Shinichi Etoh, Jinten Haku, Osamu Higashide, Don Buford and Frank Howard. Howard's an interesting choice for inclusion as his entire Japanese career consisted of one game that he went 0-2 with a walk - he'd injured his knee just before opening day. But it's fun to have a card for him (I think he has a Calbee card from 1974, but it's very rare and expensive). Here's the cards for Buford (#76), Howard (#79) and Takuji Ohta (#81): 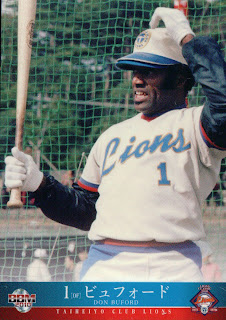 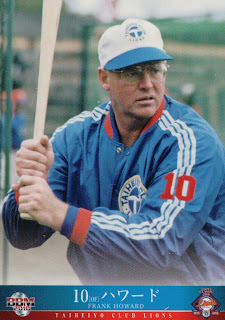 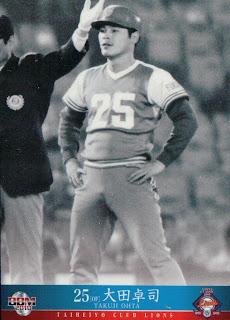 The Taiheiyo Club Lions subset also includes four cards devoted to each of the seasons of the era. Here's the 1974 card (#83), showing how much Hondo towered over his teammates: 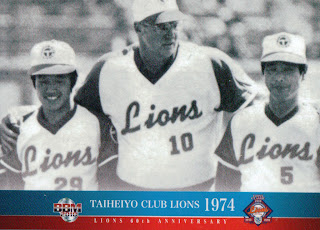 The final subset of the set contains 14 cards of the 2010 team wearing their Taiheiyo Club Lions uniforms from the "Lions Classic" games last season. None of the three 2010 players from the earlier subset appear in this one. Here's the cards of Dee Brown (#97) and Ming-Chieh Hsu (#87): 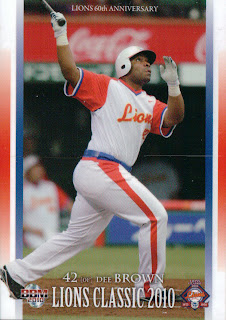