Card Of The Week December 26 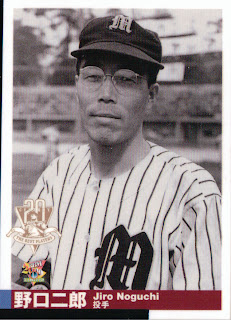 Once I got a copy of "The History Of Uniform" I went back through some of the OB sets I had and tried to identify the uniforms that players were wearing. When I reached this card of Jiro Noguchi (2000 BBM 20th Century Best 9 #124), I was a little puzzled. Obviously, the uniform was for the Mainichi Orions from 1950 to 1955, but Noguchi never played for Mainichi. He started his career with the Tokyo Senators in 1939 and continued playing for them through various name changes until 1943 when he went into the military. He resumed his career in 1946 with the Hankyu Braves and played until 1953. (And his other three cards in the 20th Century Best 9 set are either for the Senators or Braves.)

Turns out that according to his entry in Baseball Reference's Bullpen, he coached for Mainichi after his retirement. Not a shocking revelation, but it is odd that BBM chose a picture of him coaching rather than pitching for the set. It may be that there aren't many pictures of him available (and in fact the four cards from the 20th Century Best 9 set are the only four cards I have of him, so he didn't show up in any of the recent OB sets or in the "Nostalgic Baseball" set from 2006).
Posted by NPB Card Guy at 1:13 PM