Last month, Kazuhiro Wada of the Dragons and Tsuyoshi Wada of the Hawks were named the MVPs of the Central and Pacific Leagues respectively (leading to many "Wada year!" headlines I'm sure - at least in any English language papers). Here's their 2010 BBM 1st Version cards (#060 and #294): 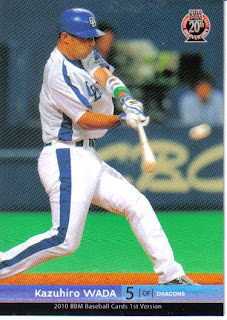 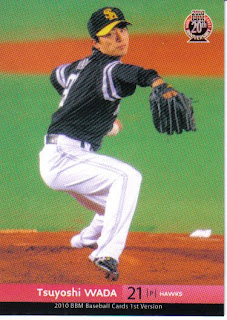 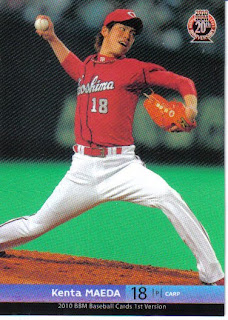 BBM had a subset in the 1st Version set for a couple of years called something like "Rookie Of The Year Preview" that I have mocked a couple of times for not actually including the eventual winner. This year, BBM changed the name to "Pick Up Hope" and, of course, finally scored a Rookie Of The Year - Hosayoshi Chono of the Giants. He has a "regular" card in the 1st Version set, but I'm going to show his "Pick Up Hope" card instead (#467): 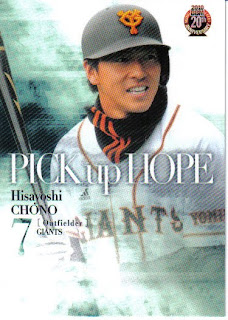 For the third straight season, BBM did not include one of the Rookies of the Year in their 1st Version set. But bizarrely, they didn't include Ryo Sakakibara of the Fighters in the 2nd Version set either. But what I find really amusing is that Sakakibara appeared in LAST year's 1st Version "Rookie Of The Year Preview" subset (#481): 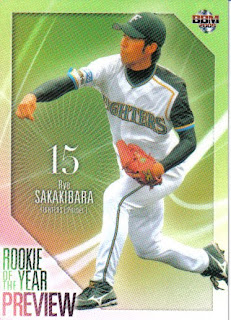 So BBM finally predicted a Rookie Of The Year in the subset, just one year early.
Posted by NPB Card Guy at 9:07 PM