One Iconic Baseball Card For Every Team

As part of Topps' 70th Anniversary, MLB.com had an article up earlier this week that listed "One Iconic Baseball Card For Each Team".  I thought it might be interesting to do something similar for NPB.
I'm not entirely sure how MLB.com decided that these cards were iconic - they had asked fans and members of their staff to submit their favorites cards but "favorite" doesn't necessarily equal "iconic".  Some of their choices are kind of odd - the Yankees' card is Don Mattingly's 1984 Topps rookie card and not the expected 1952 Topps Mickey Mantle and their White Sox card (Frank Thomas' 1990 Topps draft pick card) doesn't actually show a player in a White Sox uniform.  Actually, neither does the Royals card - must be something about guys from Auburn.  In their defense, the article says they're showing "an" iconic card for each team, not "the" iconic card for each team.
I'm going to use that same caveat - here's "an" iconic card for each NPB team.  Some teams were pretty obvious while others , especially Chunichi, Hanshin and Lotte, were a lot more difficult.  I tried to stay away from going too heavy on the rookie cards but there's a couple I just didn't feel I could ignore.  I decided to not only do the 12 current NPB teams but also the Osaka Kintetsu Buffaloes.  Please feel free to let me know which obvious cards I missed because I'm sure I missed some. 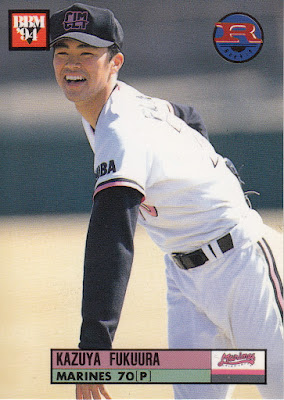 As I said before, it was hard to come up with a card for Lotte.  I ended up picking Fukuura's rookie card because he played for the Marines for 26 years and I've always been amused that he started out as a pitcher (not that that's that unusual in Japan). 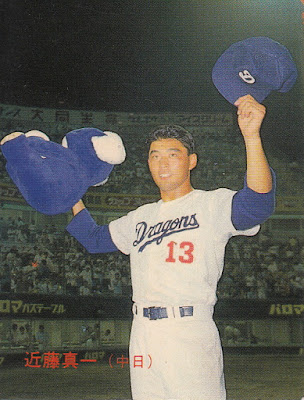 The Dragons were another difficult team.  I originally thought about going with Hiromitsu Ochiai's 2011 BBM All Star card showing him at his Hall Of Fame induction but I decided instead to pick this card of Shinichi Kondoh instead.  Kondoh had pitched a no-hitter in his NPB debut against the Giants on August 9th, 1987 and the event was commemorated on this card.  That same photo has been used on several different BBM OB cards over the last 10-15 years. 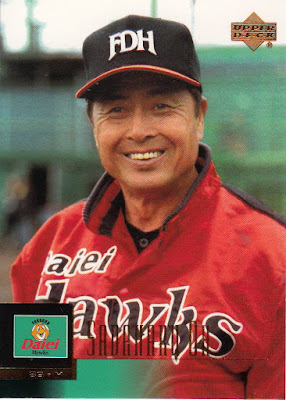 I had a couple possible Hawks cards - this 1985 Calbee Hiromitsu Kadota card or this 2019 Epoch One Kenji Akashi one - but I decided instead to go with a card I fell in love with the second I pulled it out of a pack almost 20 years ago.  The 2001 Upper Deck set is beautiful and this is just a great looking card. 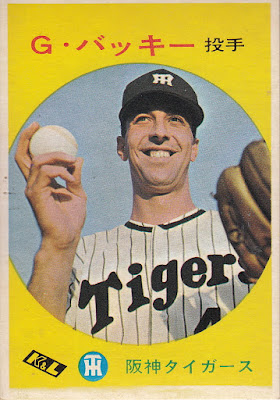 I was trying to come up with a Randy Bass card for Hanshin but I didn't like any of the ones I had.  So instead I went with another gaijin Tiger.  And pretty much EVERY card from the 1967 Kabaya-Leaf set is iconic. 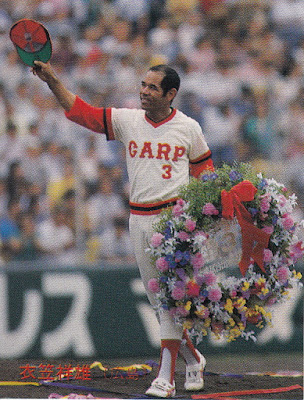 Like the Kondoh card from the same set, this card's iconic more because the image is iconic.  This card commemorates Kinugasa breaking Lou Gehrig's consecutive game played streak on June 13th, 1987.  As with Kondoh, I have other cards showing this image although this is the only one from the year it happened. 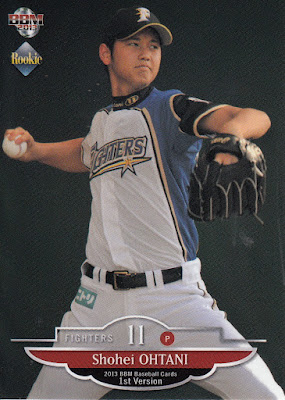 As I said, I didn't want to pick a lot of rookie cards but there were a couple I couldn't ignore. 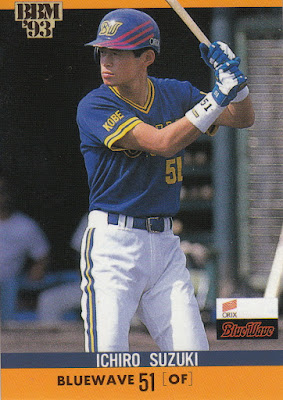 Like I said, some rookie cards I couldn't ignore.  And I still need to upgrade this card to one that's not miscut. 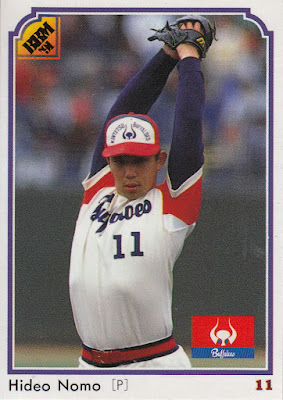 An argument could be made that this is NOT Hideo Nomo's rookie card since he had a card in the 1990 Takara Buffaloes set but this is probably the Nomo card in most demand. 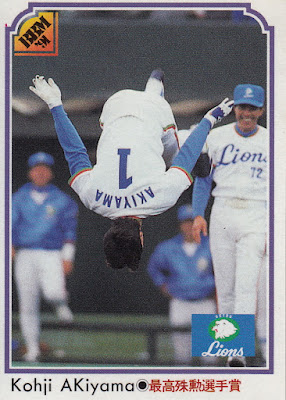 Lots of candidates for the Lions but I decided to again go with a card I loved.  Koji Akiyama did back flips when he hit a home run against the Carp in the Nippon Series in both 1986 and 1991.  I don't know if he ever did a back flip after any other home runs. 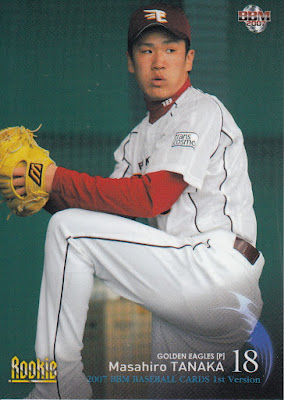 Another rookie card that was impossible to ignore. 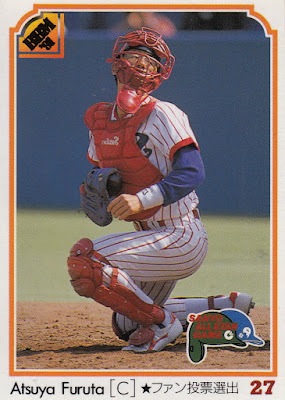 Like Nomo, Atsuya Furuta's rookie year was 1990 but unlike his 1988 Olympic team battery-mate, Furuta didn't have any cards issued that year so his rookie cards are indisputably from 1991.  There's an interesting thing about his 1991 BBM All Star card and you can probably figure it out if I mention that Furuta is not left handed.  In 2000 as I think was part of the celebration of their 10th anniversary, BBM issued a corrected card in an issue of Sports Card Magazine: 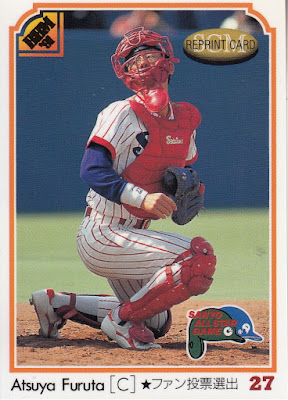 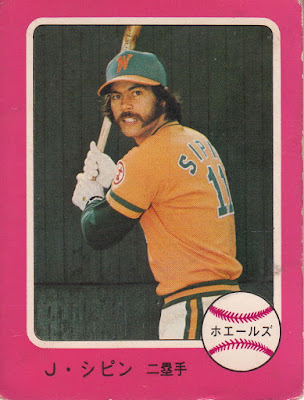 This was another team that was difficult to pick a card for but I decided to go with this one.  Between the green and gold uniform and Sipin's muttonchops, this card just screams 1970's.  You could argue it's the Japanese equivalent of MLB.com's Indians card, especially since it's a using a pseudo-1975 Topps design. 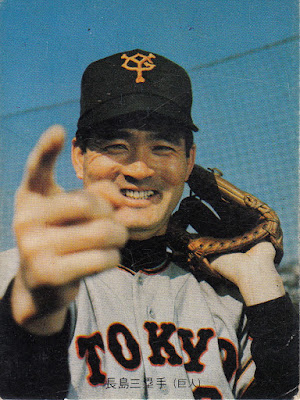 As soon as I thought about doing this post, I knew I'd be including this card.  It's the first card in the first ever Calbee set and it shows Nagashima in an odd pose that's been duplicated on cards at least three times that I know of by two different players.
Posted by NPB Card Guy at 9:11 PM

Awesome. I can’t argue with any that you have listed!

Great post! I love, love, love the 1967 Kabaya-Leaf set. And that Ichiro rookie card is awesome!

Thanks guys. I like your list, David, except that Murakami isn't with Hanshin (although I'm sure they wish he was!)

Oh no I thought I replaced him with Furuta. Should have been Kanemoto there

Since you asked about omissions (and these types of post invite people to point them out anyway) I'll mention that I might have thrown a menko or two in there, the 50s are a bit under-represented.

What would be cool maybe as a follow up would be to do a most iconic card of each team that ever existed (rather than one for just each of the current 12). Like for the Lions you could do one for Seibu, one for the Crown Lighter Lions, etc.

Yeah, I was thinking that I needed at least one menko or bromide but I couldn't think of any that seemed as iconic. Probably because my focus is more on modern cards than vintage.

Not a bad idea on doing cards for each "version" of the teams - I nominate this card of Masahiro Doi for the Taiheiyo Club Lions.