Card Of The Week April 11

A little over a year ago I got curious about what was the oldest BBM flagship set that had contained a card of a currently active NPB player.  The answer last year was the 1998 set which had Ryota Igarashi's rookie card.  With Igarashi's retirement, the oldest BBM set to contain a card of an active player is now the 1999 set which has the rookie cards for both Kosuke Fukudome (#310) and Daisuke Matsuzaka (#413) - although whether Matsuzaka should be considered "active" is an open question as this is his second season on Seibu's roster but he hasn't even pitched with the farm team during that time: 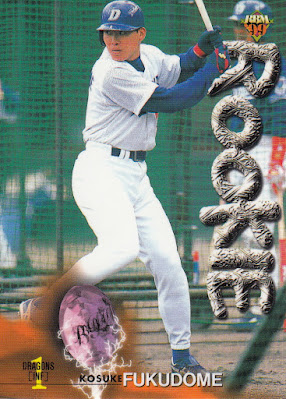 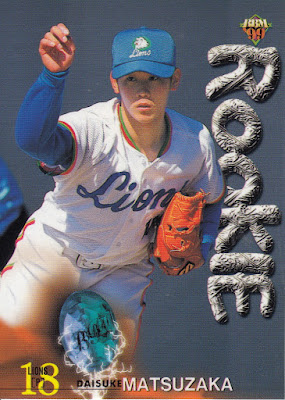 Both of these cards were on my short list for inclusion in my "One Iconic Card For Each Team" post.

As I said last year, this statistic only started to be interesting in recent years.  Until 2016, the answer was always 1991.  But after both Satoshi Nakajima and Masahiro Yamamoto retired in 2015, the answer moved up to 1994 (Kazuya Fukuura, Kazuo Matsui and Daisuke Miura) and remained there until last year (Muira retired after 2016, Matsui after 2018 and Fukuura after 2019).

If these two guys retire this year, the answer next year is likely to skip at least one year as no member of the 2000 NPB rookie class is still active in the league (although at least two - Munenori Kawasaki and Itsuki Shoda - are still active in independent ball).