Card Of The Week March 22

I got about 120 1999 BBM cards from Ryan in the package he sent me a couple weeks ago and a thought occurred to me while I was putting them away.  I noticed that there were several players in the set - Kosuke Fukudome, Daisuke Matsuzaka and Kyuji Fujikawa - who were still active in NPB.  I got to thinking that it was likely that the 1999 set was the oldest BBM set that featured any active players.  I did some quick research on it, expecting to confirm what I thought.

The oldest BBM set featuring a currently active NPB player is the 1998 set as Swallows pitcher Ryota Igarashi was a rookie that season.  Here's his card (#289): 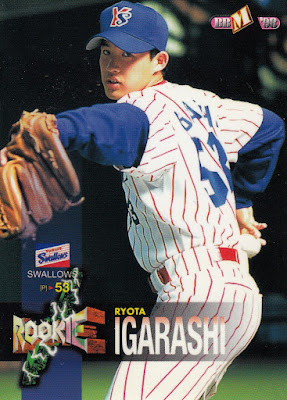 This isn't anything I've thought about tracking until now but it's only recently gotten all that  interesting.  Until (and including) 2015, the oldest BBM set with an active player was 1991, BBM's inaugural season.  Once Satoshi Nakajima retired, it became 1994 for the next four years.  Now that Kazuya Fukuura has retired it's jumped to 1998.
Posted by NPB Card Guy at 8:56 PM

That is an interesting thing to keep track of.

I hope they are able to salvage at least part of this season since if he gets an appearance it'll mean he's played in 4 different decades!

Yup - him and Fukudome, Fujikawa and Matsuzaka!