Card Of The Week March 1

I was putting the cards from the 2020 BBM Rookie Edition set into my database the other night (because yes, I'm that much of a geek) when I realized that I had been mistaken last fall when I said that there were four players from the 2019 Panini USA Baseball Stars & Stripes Japanese Collegiate All Star team inserts who were taken in the NPB draft.  It turns out there were five.  In addition to Shoki Katsumata, Masato Morishita, Toshiya Sato and Takashi Umino, Yuki Tsumori of Tohoku Fukushi was taken in the third round by the Hawks (one round after they took Umino).  This brings the count of players in that set who are now in NPB to 13.  Of the remaining 11, only two of them (Kento Ogo and Teruaki Sato) are still in college.  I assume the other nine are playing in the corporate leagues although I only know that for sure for Seiya Tanaka. 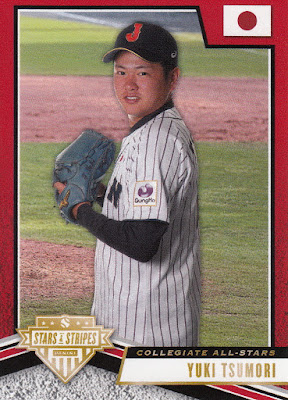 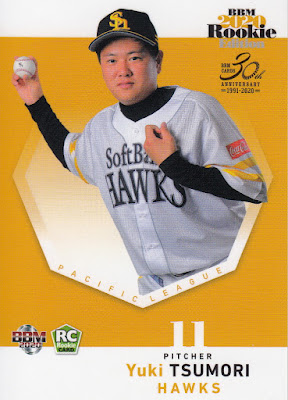 Panini is apparently again including cards for the Japanese Collegiate All Stars in this year's edition of USA Baseball Stars & Stripes which is set to be released on March 11th.  I'll try to do a post about it when I learn the details.
Posted by NPB Card Guy at 6:37 PM