Ryan also picked up some cards that had originally been published inside issues of Sports Card Magazine (SCM) for me.  At my request he bid on (and won) a couple auctions for some cards from 2005 and 2006.  I wanted to do a quick post on those cards.

The first batch of cards had been published in SCM #50 which came out in March of 2005.  There were cards of five players issued with that edition of the magazine - Hisashi Iwakuma, Munenori Kawasaki, Hiroyuki Nakajima, Michael Nakamura and Ryota Igarashi.  The Nakamura card was a bonus card for the 2005 BBM Rookie Edition set and the Igarashi card was a promo for the Swallows team set.  The other three cards were an original design for SCM.  SCM cards usually have some sort of parallel version and I somehow got the gold signature parallels for all of these cards - I think the auctions were for several "hot packs" of all parallels as this wasn't the only issue that I got parallel versions of all the cards.  Here are scans of all the cards except the Nakamura card - I already had it and if you're interested, you can see it here.

The next issue I got the cards from was SCM #51, published in May of 2005.  It included two cards commemorating the first inter-league games ever in early May of 2005 (which means the cards got turned around in just a couple weeks as the magazine was published at the end of that month).  Again I got the signature parallels for the cards:


The Chiba Lotte Marines won the 2005 Nippon Series and SCM #54 (published in November of 2005) included four cards celebrating the championship.  I only got three of them and they are not the parallel versions.  Here's the front and back of all three (you can see that the missing card is SCM #60): 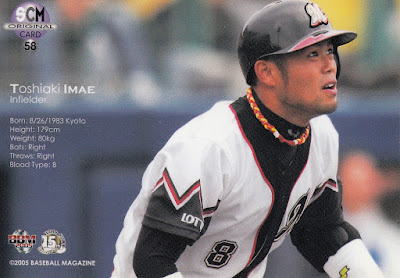 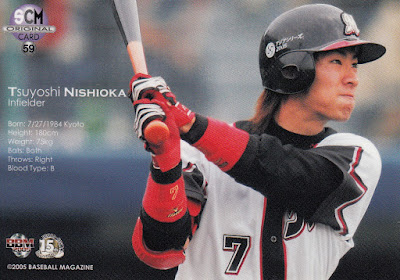 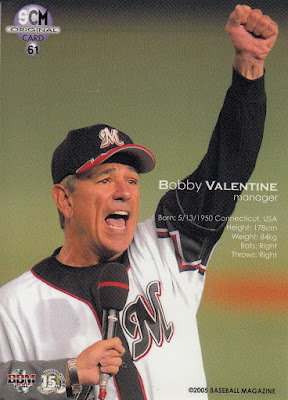 SCM #56, published in March of 2006, contained cards for five players who had changed teams over the winter.  Three of these players were returning from North America - Norihiro Nakamura, Kazuhisa Ishii and Shingo Takatsu.  The other two were essentially traded for each other - that winter Kiyoshi Toyoda left the Lions as a free agent and signed with the Giants, who sent Akira Etoh to Seibu as compensation.  It may not be obvious at first but these cards are also parallel issues - the regular cards have white rectangles at the bottom, not yellow.

The final batch of SCM cards Ryan sent me were from issue #57, published in May of 2006.  These four cards celebrated the Monthly MVPs for April (and the last little bit of March) of 2006.  I did not get the parallel versions of these: