Card Of The Week March 15

I was ingesting all the BBM flagship cards from the 1990's that I got from Ryan when I came across this card that features a photo that surprised me.  See if you can guess what's unusual about it:


The Yomiuri Giants are the NPB parallel of the New York Yankees in any number of ways - most popular team in the biggest city in the country, most championships in history, huge financial resources allowing them to buy up all the talent, etc.  One of the more obscure things they have in common is that they forbid players to have facial hair.  Which is why the above photo of Naoki Sugiyama is so surprising.  He's even got a mustache and beard in the mug-shot on the back of the card: 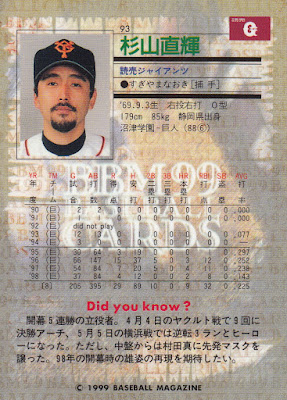 I took a look at the rest of the cards I had of Sugiyama and the only other card I found of him with facial hair was his 2000 BBM card:

Although he's clean shaven in his mug-shot: 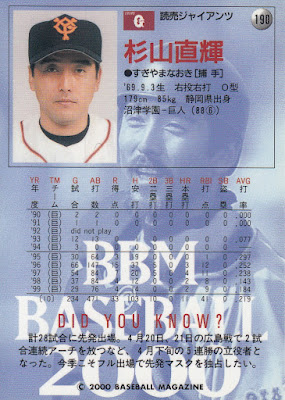 I checked his Japanese Wikipedia page to see if he had some sort of special dispensation from the team to have a beard but I didn't see anything.  However I did see that he retired from the team in late October of 2000 after some sort of incident at the Giants' fall camp in Miyazaki.  The Google translation isn't clear but it looks like it might have been some sort of sexual assault which is kind of a heavy note to end what I had intended to be a light-hearted post.  Which makes it so appropriate for 2020.

UPDATE - Patrick Newman (@npbtracker) pointed out to me that Dan Gladden's 1994 BBM card showed him with facial hair.  Maybe foreign players are exempt.  I did see a couple Balvino Galvez cards where he's sporting a mustache.
Posted by NPB Card Guy at 2:04 PM