Every so often I get the urge to dive into the confusing mess that is Shukan Baseball cards.  These are the cards that BBM has given away in random issues of Shukan (Weekly) Baseball.  They are confusing because unlike the Sports Card Magazine cards there's no master checklist that I've ever seen nor is there a card numbering system that crosses magazine issues (again unlike Sports Card Magazine which actually took about 10 years to establish one).

The Shukan Baseball cards have changed over the years.  In the 00's they were a combination of promo cards for BBM sets and original cards.  For the last 10 years or so they've pretty much only been promos.  The original cards in the 00's had an unusual card number scheme.  Each card was numbered something like "n-x/y" where "n" was the "volume" ( I'll explain in a minute), y was the total number of cards with the particular issue and x was the card number itself.  By "volume" I don't mean the actual issue number but the number of magazines so far that year that had cards in it.  So the first magazine in a particular year to have cards in it would be "volume" 1 even if that issue was the seventh to be published that year.  So let's say that volume 1 had three cards with it - they'd be numbered "1-1/3", "1-2/3" and "1-3/3".  If the first magazine to have cards in it the following year had three cards in it as well then they'd be numbered exactly the same.  As I said, it's confusing as all get out.

Ryan had recently picked up a big lot of Shukan Baseball cards (roughly 200 cards!) and offered them to me as part of the package he sent me a few weeks back.  I've been trying to make sense of all the cards he sent and update the checklist I've been half-heartedly working on for the last five years.  But once again I got very confused because I kept coming across cards that had the same numbers in the same years.  For example I had two 2004 cards that were labelled "1-1/3" and "1-1/4" respectively.  That would seem to indicate that there were two issues in 2004 that were the first one to have cards - one had three cards and the other had four.  This didn't make any sense to me.

Ultimately there were 25 cards in the lot that were from Baseball Magazine.  From those 25 cards I've been able to infer that there were at least 36 cards given away in the magazine from 2004 (I think the Fall 2004 issue to be exact but I'm not sure) until the July 2008 issue (the magazine went from being published quarterly to bi-monthly starting in July of 2007).  I've put a checklist together and added a page for it on the upper right side of my blog.  I'll update the checklist as I discover more cards.

Here are the cards I got.  These are the earliest ones I know of:


The first four cards (of which I only have two) had a theme of "Disbanded Club Players".  These cards are unique in that they are the only ones that don't identify the issue that the cards were published with.  Here's the back of Fukumoto's card to show you what I mean: 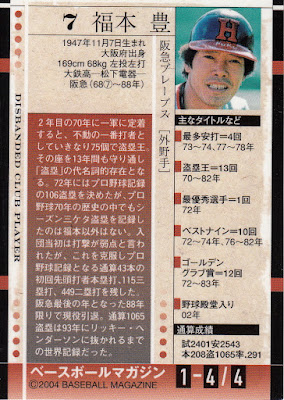 You can see on the bottom left of the card the Japanese text for "Baseball Magazine" that I mentioned.  All the cards after this one have a couple extra characters to identify the issue.  Until mid-2007 these would be "winter", "summer" or "autumn" (for some reason the spring issue never had cards) and then they were the month.  So I don't know for sure which issue from 2004 these cards were given away with.  However the magazine's Japanese Wikipedia page lists the theme of each issue since the 1980's and the autumn 2004 issue's theme is "History of the baseball team" which sounds about right for the theme of the cards.

I do not know who the other two cards from this group are.  This was the only group that had four cards.

The next cards were a little confusing.  Here they are:


Here's the back of Matsuzaka's cards so you can see how the issue the cards came from was identified: 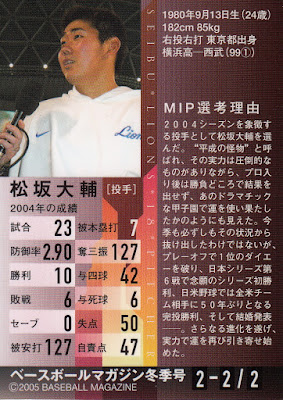 The "冬" character is "winter" - the two characters to the right of it mean "issue" I think.  What gets confusing is that the cards are labeled as 2005 cards but there is another batch of 2005 cards labeled as from volume 2 and yet another batch that are from the 2005 winter issue!  Given that these cards celebrate the "Most Impressive Players" from 2004 I figure that these were came out with what essentially was the 2004-05 Winter Issue of the magazine.  So the autumn 2004 issue was the first volume with cards in 2004 and this was the second one, even though the year on the cards changed.  Did I mention these are confusing?

This is one of only two groups that I have all the cards for.  It's the only one that has only two cards.

The next group is from the summer 2005 issue.  BBM reset the "volume" count to one with this issue:


The magazine's theme was professional baseball in the 1970's.  I don't know who the other card from the group is.  I'll point out that the win totals for Suzuki and Yamada are only their totals from 1970's.


I don't know if the fall 2005 issue's theme was 80's baseball but it was the theme of the cards.  Once again I don't know who the third card is for.


The winter 2005-06 issue's theme was 90's professional baseball and the cards given away with the issue reflect this.  I only have these two but I do know who the other card is for.  Not surprisingly, it's Ichiro.  Also not surprisingly, Collecting Ichiro has images of the front and back of the card.


The next issue with cards was the autumn 2006 issue.  Since this was the first (and only) edition with cards in 2006, it got assigned volume 1.  I again don't know who the third card is.  I also don't know what "Henkakyu" means.

Baseball Magazine switched to a bi-monthly schedule with their July 2007 issue.  The theme of it had something to do with managers so the cards celebrate the Nippon Series championships of a couple active managers.  This is the only group of three cards that I have all of.


The September 2007 had another three cards.  I again don't know who the third card is of.


The November 2007 issue featured a theme of something like "the aesthetics of team love".  The cards have the phrase "The Man Loving Tigers" which I suspect isn't a very accurate translation of whatever the original phrase was.  I again don't know who the third card is of although I'd be willing to be it's either Akinobu Mayumi or Randy Bass.


BBM reset the volume number again for 2008.  The first issue with cards was the March edition.  I had originally thought that these might be memorial cards as Inao had passed away in November of 2007 and I knew that Kobayashi had also died.  But after doing a little checking I discovered that Kobayashi didn't pass away until January of 2010 so that's not the case.  The text on the cards says "Uniform was loved by everybody" so maybe the theme was just the uniforms.  The back of Inao's card does mention his passing.  What's odd about these cards is they're slightly wider than normal cards - measuring 2 11/16 inches wide instead of 2 1/2 inches.  Their height is the standard 3 1/2 inches.

Not to sound too repetitive but once again I don't know who the third card is of.


The final group of cards that I know of were issued with the July 2007 edition of the magazine.  The magazine's theme was "dream record" and the cards are labelled "The Record Breaker".  I don't know what record Hiramatsu broke and while Kanemoto holds a number of records, the photo on his card was from when he got his 2000th hit (April 12th, 2008 in Yokohama) which was not a record.

You've probably already guessed that I don't know what player is on the third card from this group.

It's a shame that BBM seems to have stopped issuing cards with Baseball Magazine after 2008 as I find the 2008 cards to be the most attractive ones they did (I'm very partial to borderless photos on cards).
Posted by NPB Card Guy at 10:16 PM