A couple of years ago (about a year after I got serious about learning about Sports Card Magazine and the baseball cards distributed with issues of it) I started looking into the baseball cards that were periodically distributed with Shukan (Weekly) Baseball magazine.  I kind of lost interest however as pretty much everything that's been issued since 2010 appears to just be straight promo cards for BBM's issue - these cards are identical to the equivalent BBM issues except for maybe the color on the card and text on the front saying "Weekly Baseball Promotion".  But I've come across some cards lately that are making me reassess this a little bit.  And of course when I say I've come across some cards lately what I really mean is that I asked Ryan to pick up the cards for me off Yahoo! Japan Auctions.

Baseball Magazine Sha, the magazine publisher that's the parent company of BBM, started publishing Shukan Baseball in 1958.  I don't know for sure when they started including baseball cards in issues but the earliest one I've seen on Yahoo! Japan Auctions was from 2002.  Not every issue has baseball cards and I haven't quite figured out how often they do.  During the 2000's issues that had baseball cards could have anywhere from 2 to 5 cards.  Like the SCM cards, some of the cards were the standard promo cards for BBM sets but a lot of them were completely original cards.  I found a couple cards from this period that I was interested in and were up for auction fairly cheap and asked Ryan to pick them up for me.

The first two of these are from 2005 and celebrate the alternate uniforms worn by a couple teams during the inter-league games that year (the first year of inter-league play).  There were actually three cards included in the issue but I don't know who the other card is of. 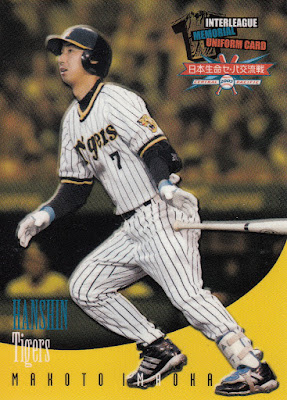 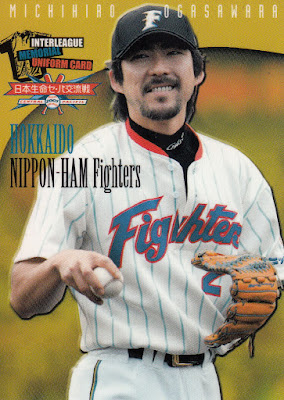 The other card I had Ryan pick up for me was this 2006 "Super Rookie" card of Yoshihisa Hirano: 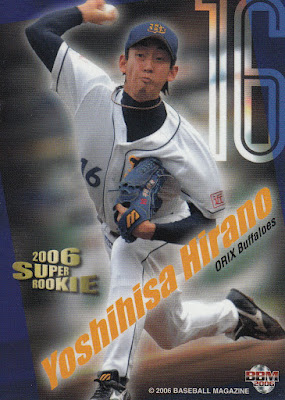 The numbering scheme used by these cards is confusing.  Let me show you the back of Ogasawara's card as an example: 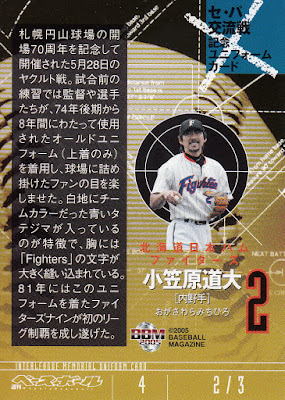 There's a "4" that I think identifies the issue the cards came out of and then a "2/3".  The "3" I think means that there were three cards in the issue and the "2" means this is the second of the three - the Imaoka card has "1/3".  Now that part seems pretty obvious but the issue number is confusing.  Shukan Baseball is published roughly every week (hence the "weekly" part of the name).  Inter-league in 2005 was in June so these cards must have come out in June or July.  There certainly would have been more than four issues by that time that year.  I suspect that the issue that these cards came out with was the fourth issue that year to have cards.

The turning point for Shukan Baseball's cards not being interesting anymore (at least to me) appears to be around August of 2010.  They issued 12 cards over three issues (cover dates of August 2nd, 9th and 16th) that celebrated their 3000th issue (not sure which of the three that actually was).  Now if you had asked me two weeks ago I would have told you that EVERY Shukan Baseball card since then was just a promo card.  But that turns out not to be quite true.

Last fall I came across an auction on YJA that was a lot of Shukan Baseball cards from 2010-13.  My curiosity was piqued by it as it showed an alternate version of Hiroyuki Nakajima's 2010 2nd Version card - the card had a different photo than the regular card.  I really couldn't see what the rest of the lot had but it was pretty cheap so again I asked Ryan to pick it up.  It was actually one of the things I was most interested in seeing in the package I got from him two weeks ago (not that there was anything in the box I wasn't interested in).

The lot had 26 cards in it.  Eight of these cards were from 2010 and were issued after the 3000th issue.  All eight of these cards (which includes the Nakajima card) are alternate versions of cards from BBM sets.  The Nakajima card was one of two that came with issue #36 with a cover date of September 6th - that's issue 36 for the year rather than the 36th issue that year with baseball cards in it.  The other card was an alternate version of Hayato Sakamoto's 2nd Version card.  Here's both of these cards with their original version - in each case the original is on the left (and obviously is NOT marked as "Weekly Baseball Promotion"): 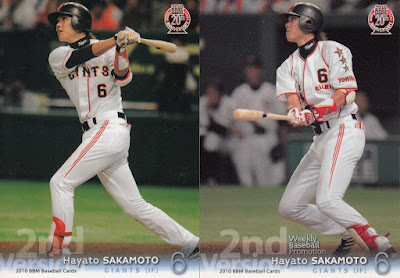 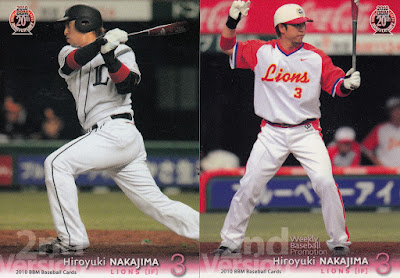 The card numbering scheme changed for these cards.  These two cards are numbered 812 (Sakamoto) and 813 (Nakajima) - it's a continuation of the numbering from the 2nd Version set.

Issue #42 in 2010 had a cover date of October 4th - I have no idea how there were six issues between September 6th and October 4th.  This issue had alternate versions of two cards from the "Cross Stream" subset of the Touch The Game set that year.  I don't have the original version of the cards so I'll just show the Shukan Baseball versions: 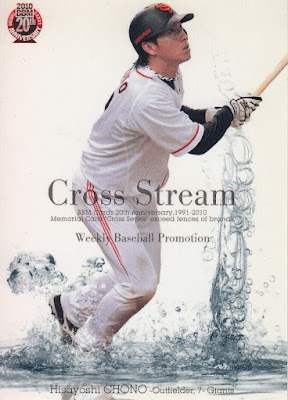 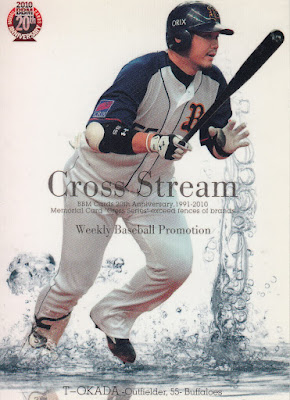 Once again the cards were numbered as a continuation of the original set - Chono is #CS181 and Okada is #CS182.  You can see the original Chono and Okada cards at Jambalaya.

The October 25th issue (#47) had alternate versions of two cards from the BBM 20th Anniversary set.  Once again the cards are numbered as a continuation of the original set: 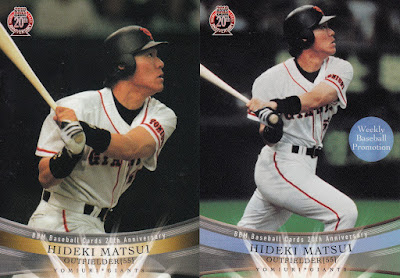 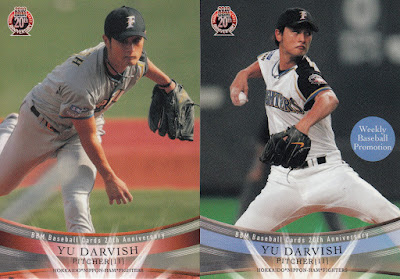 The last issue in 2010 to have baseball cards was #53 with a cover date of November 29th.  The cards were alternate versions of cards from that year's edition of the "Historic Collection" sets - "Hometown Heroes".  The set has a "cover" date of 2011 but was published in November of 2010.  Again the cards were numbered as a continuation of the set. 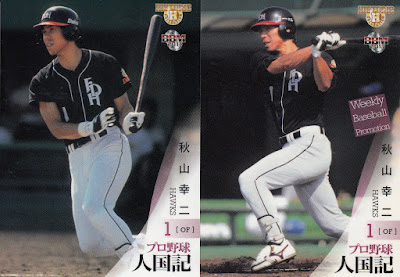 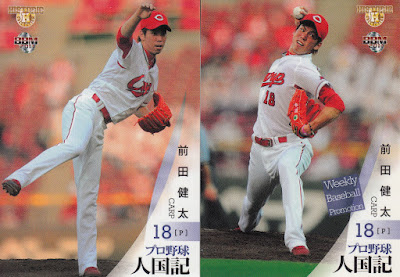 I had started a list of these cards a few years back (which is where I got some of the data above about publication dates) but I kind of lost interest.  I may have to start researching them again.  Even if the recent cards aren't all that interesting I think some of the cards from the 00's might be worth learning about.
Posted by NPB Card Guy at 10:29 PM