I'm doing a bit better than I was last weekend so I thought I'd make an attempt to post something about a project I've been working on for a couple months or so.  Since I started picking up the new issues of Sports Card Magazine when they come out I've been getting more and more curious about the cards that BBM prints up solely for use in the magazine.  So I started doing some research with the goal to generate a list (in English) of all the SCM insert cards.

You may be telling yourself "That's not a big deal.  Every issue of SCM includes a list of all the SCM cards so far".  Which is true, but there's several caveats.  The first being that the list is in Japanese, not English.  The second is that there's not much information about the card other than the name of the player(s) depicted on the card.  The third is that there are no card numbers associated with any of the cards listed in the SCM even though almost all the cards I had seen had card numbers.  The final caveat was something I didn't discover until I was halfway through my research - the list in SCM is not complete.  I found at least one instance of there being a card that was obviously from SCM not being in the magazine's list.  So, lots of work to do.

The magazine that we now know as Sports Card Magazine started out as a small magazine (or pamphlet) in the early 1990's that was mostly given away at card shows.  Paul Margiott, one of the pioneers of the hobby, told me that they were "glossy paper, center stapled, color covers, professionally printed."  They contained  "ads, articles, price guides, ‘World Card News’, etc;"  The final issue appears to have been #14, issued with a cover date of "Winter 1996".  This issue had 48 pages. (The quotes from Paul Margiott came from an email conversation he and I had a few months back.  I apologize ahead of time if I misunderstood something he wrote me).

The first newstand issue of Sports Card Magazine was published in October 1996.  As an indication that this was a break from the earlier giveaway issues, this issue was labelled #1.  The next issue was published in March of 1997 and the magazine has been published bi-monthly ever since.*

BBM has included cards inserted in every issue of the magazine starting with issue #1.  I have not been able to figure out who the cards with issue #1 were.  Many of the insert cards during the first few years were not baseball related - many were related to wrestling, sumo and boxing, as well as I think at least one race horse.

From what I've put together, there are a total of 341 cards that have been published as inserts to SCM.  However, only 271 of them have actual "SCM Original Numbers".  The rest are unnumbered (or in some cases have the number of the actual version of the card that they are the promo version of).  The first card to have an SCM number on it was this card of Koji Uehara from issue #13 in January of 1999: 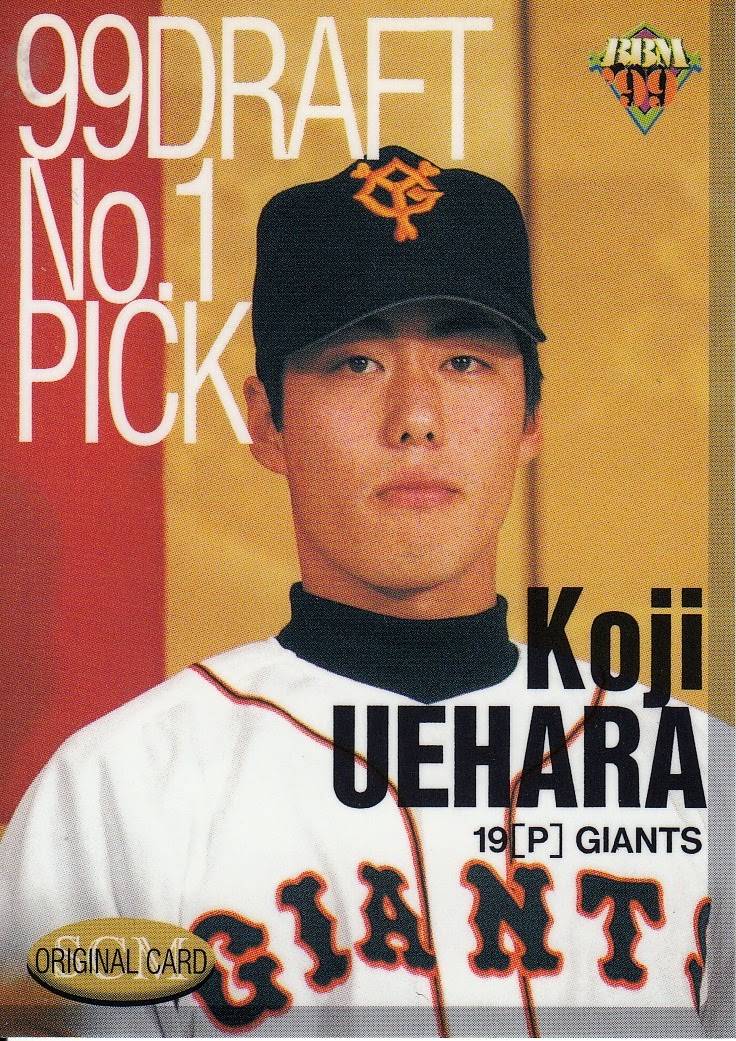 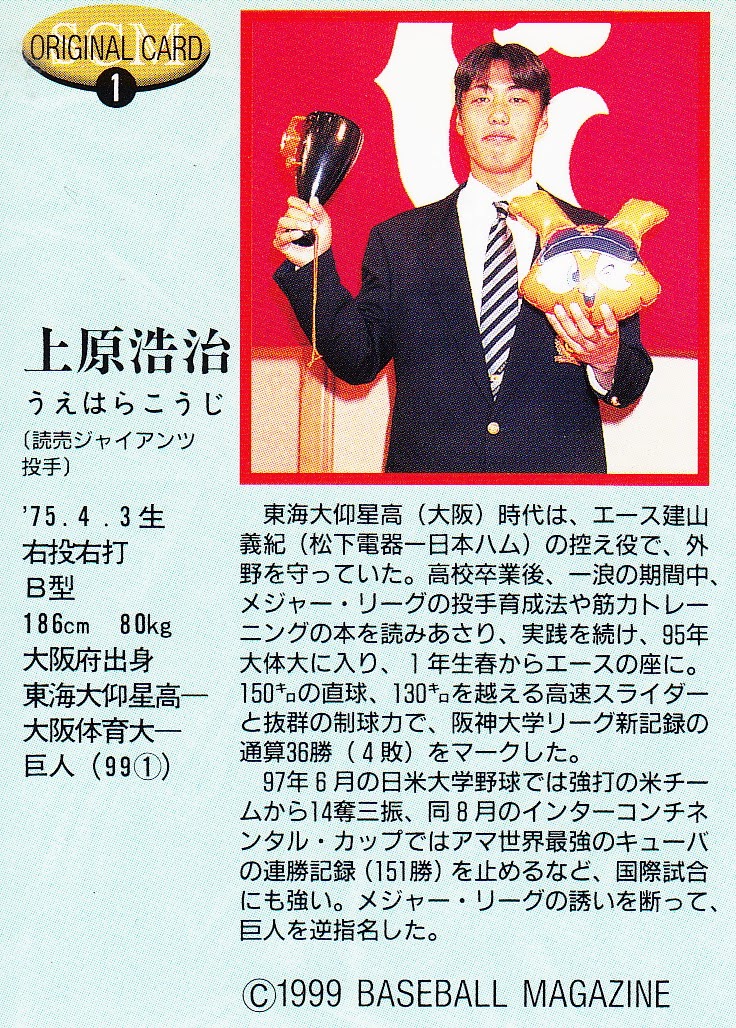 And before you ask - this is not the first card included in SCM that was not a promo version of another card.  There were at least two others prior to this.

Now the next frustrating thing in attempting to catalog all of these is that not all the cards in later issues were numbered.  For example, here's a reprint of a 1974 Calbee Sadaharu Oh card that was included (with a reprint of a Shigeo Nagashima 1973 Calbee card) in issue #15 in May of 1999, four months after the above Uehara card: 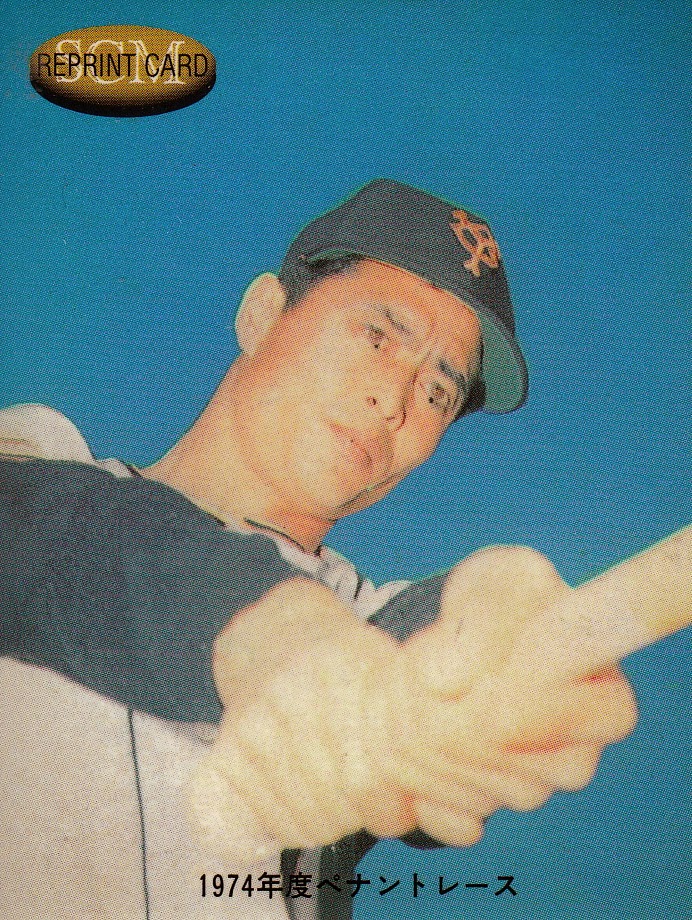 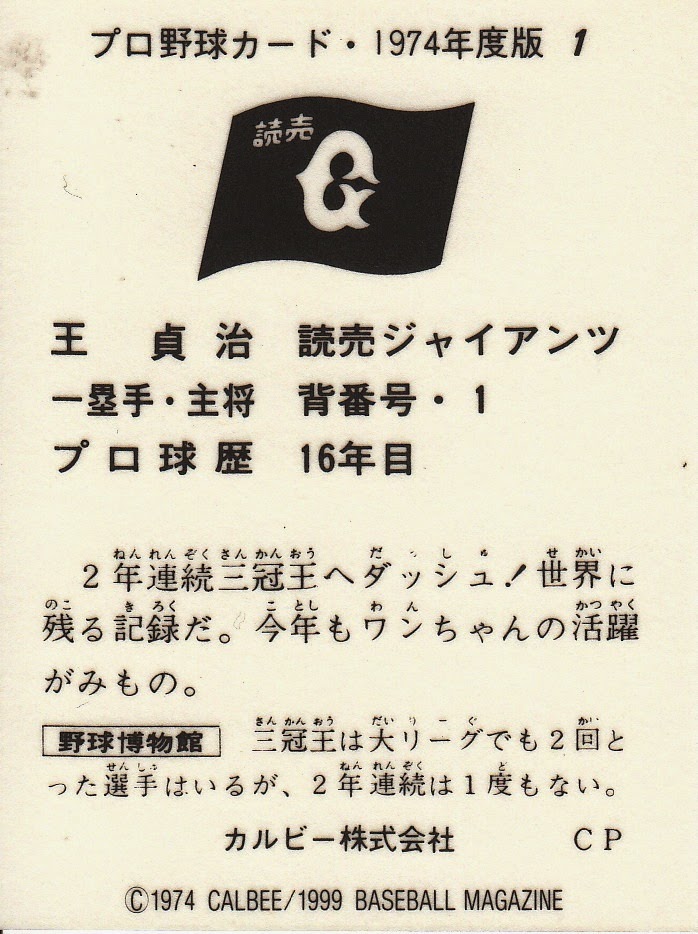 Back to being unnumbered.  It looks like SCM would skip number the insert cards for the next nine years or so - the last cards that I know for sure were unnumbered were included with issue #68 in March of 2008.

I've lumped all the cards into five categories - Original (meaning there's no set that the card is related to - at least not one from when the card was issued), Reprint (reprint of an earlier card), Promo (promo version of a card from a set that is indistinguishable from its original except by text saying it's a promo and/or a color variation in the graphics), Variant (a promo version of a card that differs in picture and/or additional graphics) and Bonus (an original card done in the format of a recent set). 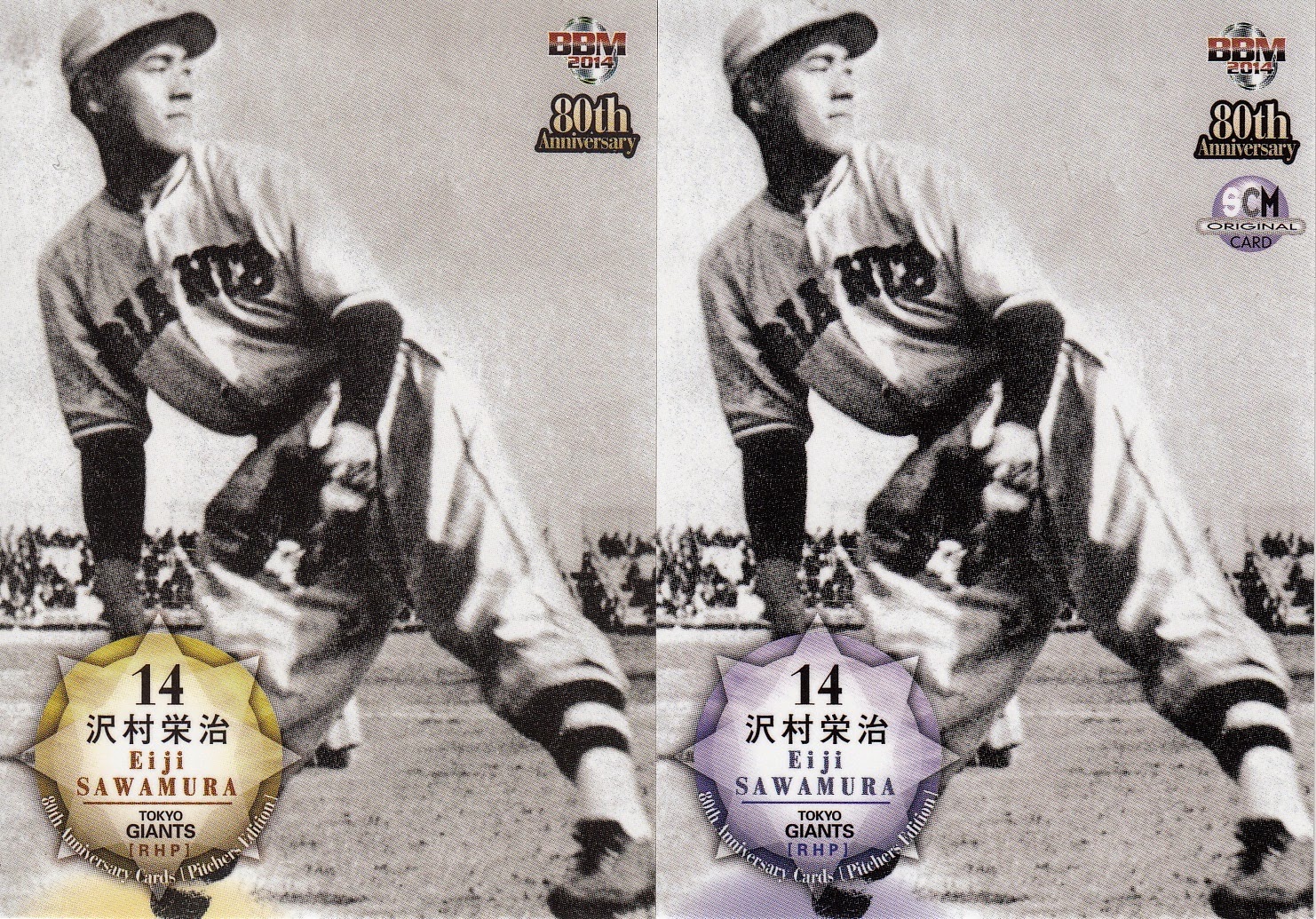 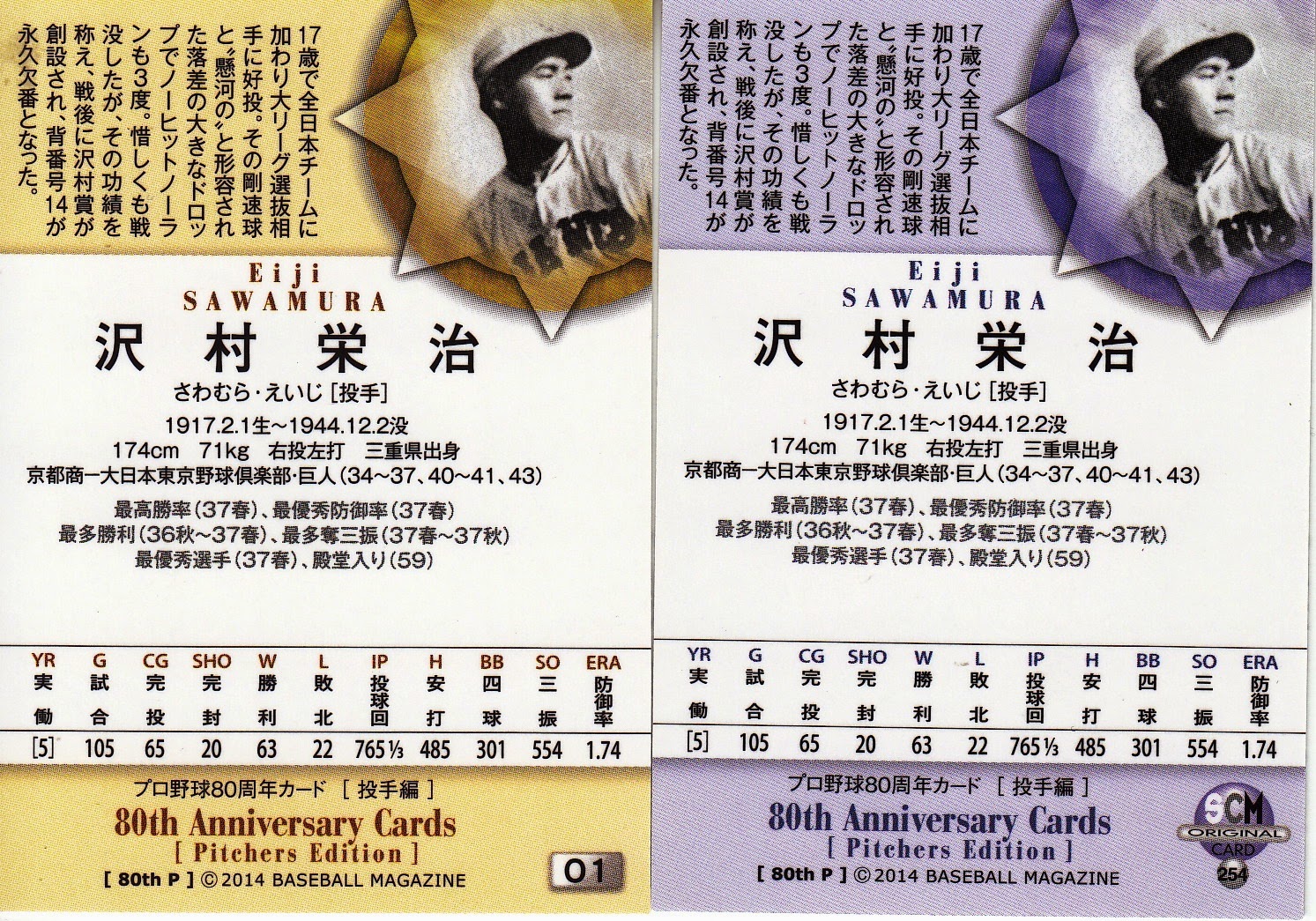 As you can see, the photos are identical - the only difference is in the color of the graphics (and the inclusion of the SCM logos).

This Michael Nakamura card is a Bonus card for the 2005 BBM Rookie Edition set - it is numbered #120 while the original set ended at #119. 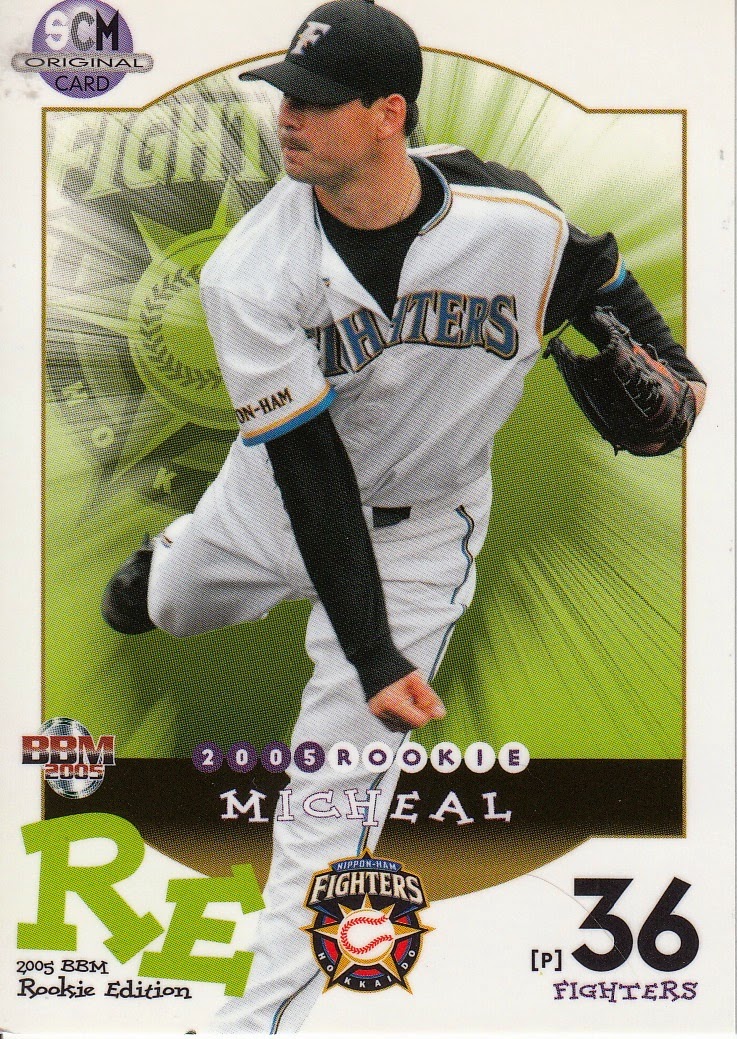 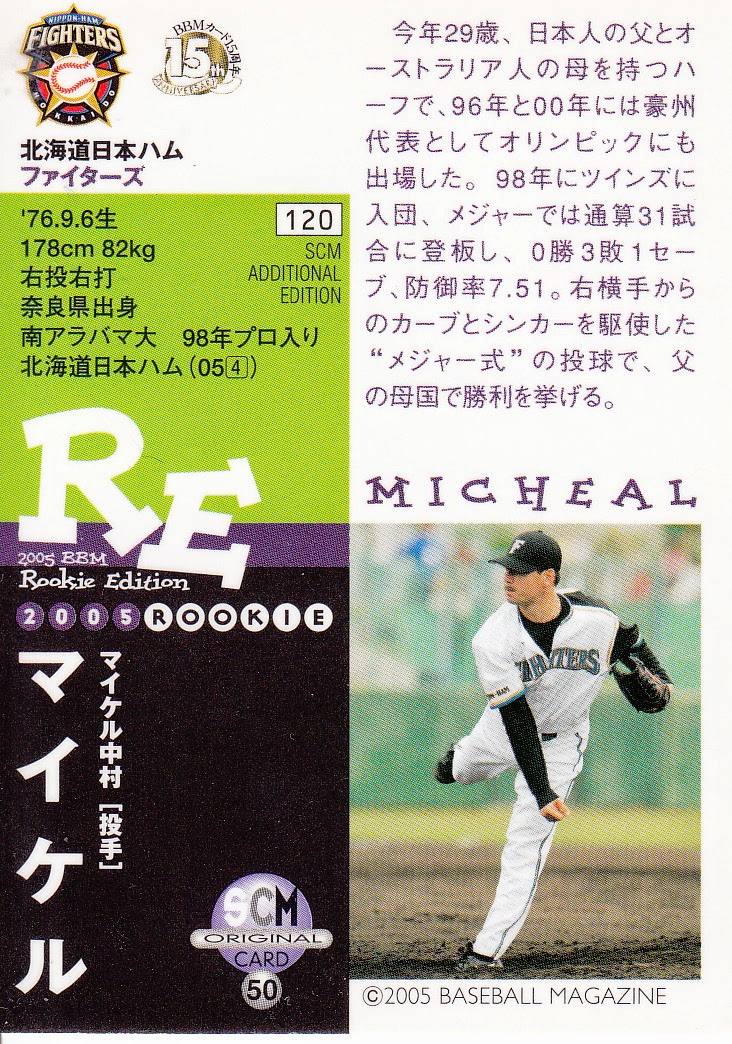 One other thing I want to point out is that BBM has apparently been doing parallels of these cards for a while now, possibly all the way back to issue #1.  I can't claim that every single card has multiple parallels but I have seen facsimile signature parallels as well as foil or laser ones: 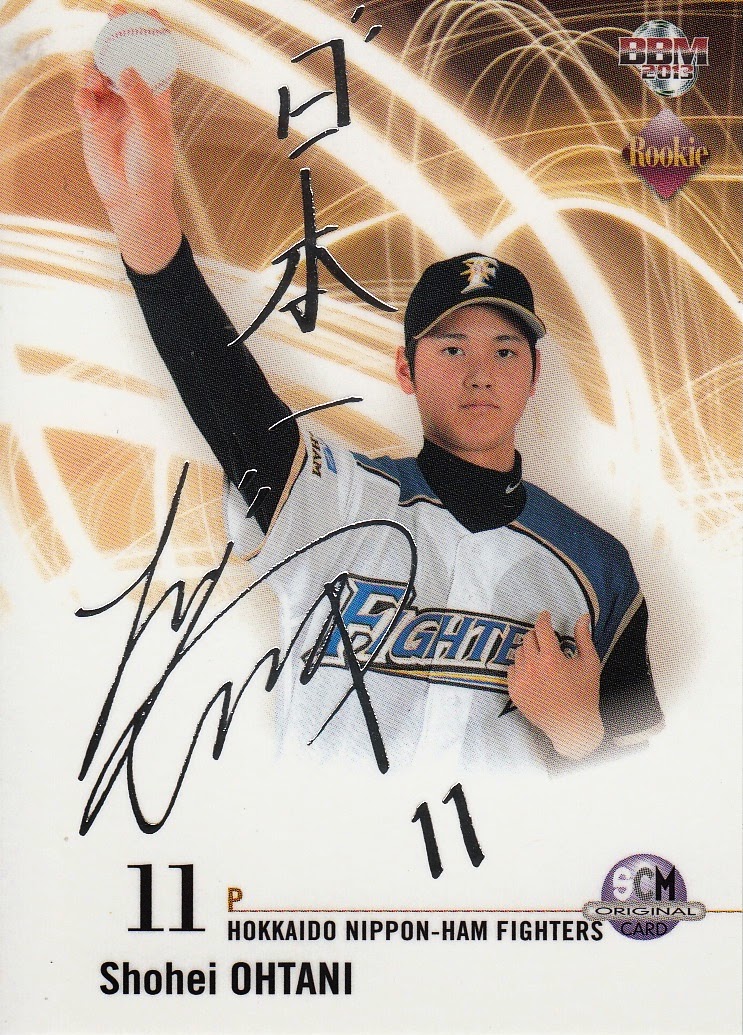 There's a lot of interesting cards that BBM has included with SCM.  Many highlight events or awards that BBM has not done anything with in their flagship sets.  There is what I felt a surprising number of bonus cards for the 2007 1st Version set and a couple of the Rookie Edition sets.  There are some interesting inserts like the one with issue #81 in May of 2010 - they are cards of rookies done in the style of the 1991 BBM flagship set - basically Classic before BBM officially did Classic in 2013.

I've put a link to my checklist here so that any updates I make to it will immediately become visible to anyone looking at it.
Posted by NPB Card Guy at 10:05 PM