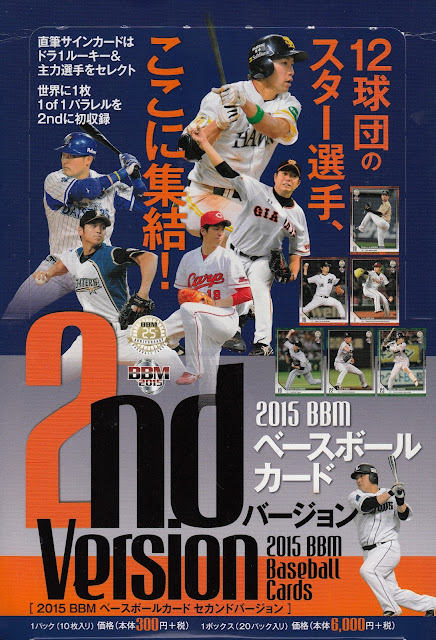 
Size: 312 cards (cards numbered 337-600, then 12 cards of "Ceremonial First Pitch" subset are separately numbered FP01-FP12 and 36 cards for "Cross Plasma" subset are separately numbered CP49-CP84)
Cards Per Team: 19 (team card + 18 players)
Team Card Theme: Post Victory Celebrations
Number Of Leader Cards: N/A
Checklists: 0
Subsets: 1st Version Update (36), Ceremonial First Pitch (12), Cross Plasma (36)
Inserts: Future Legends
Memorabilia Cards: Jersey cards for Chihiro Kaneko, Kenta Maeda and a "Combination" jersey card with both Kaneko Maeda.  I think there's only 100 of each of the single cards and only ten of the "Combination" card.  There is also a parallel version for each - limited to 19 for Kaneko, 18 for Maeda and 5 for the "Combination" card.  There are also 24 autograph cards available which each have a press run between 10 and 35 cards.
Parallels: 16 of the 1sr Version Update and 56 of the regular player cards have four different facsimile autograph parallels.  I think that they are silver (numbered to 100), gold (numbered to 50), red (numbered to 25) and green (numbered to 10) but I could be wrong.  There are two parallels for the "Cross Plasma" cards - one is limited to 100 and the other is a "1 of 1".  There is a parallel (limited to 50) for the Future Legend insert cards and I think that there is also one for the "Ceremonial First Pitch" cards (although I'm not positive about that and I don't know if they are serially numbered or not).
Notable Rookies: None

The design of the regular cards is one of the rare times that BBM has used a border on a flagship set.  The design looks more like something BBM would use in a team set.  I think it makes the front of the cards seem a bit crowded.  I'm kind of becoming a broken record (does anyone understand that metaphor anymore) on my other complaint about the set - the photography continues to be pretty monotonous - mostly batters batting and pitchers pitching.  There are a handful of fielders fielding cards but pretty much nothing in the way of particularly interesting photography.  Here are some examples:

As in previous years, the pictures on several of the player's cards are very similar to their 1st Version cards:


The stats on the back of the card are through May 25th this season:


Forty of the 216 players who have regular cards in the set did not appear in this year's 1st Version set:  Yuta Kimura, Ikuhiro Kiyota, Shunichi Nemoto and Tatsuhiro Tamura of the Marines; Takuya Aso, Atsushi Fujii, Anderson Hernandez, Shinji Tajima and Tomoya Yagi of the Dragons; Akira Niho, Tomoki Takata and Shinya Tsuruoka of the Hawks, Keisuke Kanoh of the Tigers; Shota Nakazaki and Seiya Suzuki of the Carp;  Yuhei Kagiya, Kensuke Kondoh, Hiromi Oka, Masaru Takeda, Keisuke Tanimoto and Mitsuo Yoshikawa of the Fighters, Shunta Gotoh, Tomoyuki Kaida, Daiki Tohmei and Shohei Tsukahara of the Buffaloes, Yosuke Okamoto and Ken Togame of the Lions; Toshihito Abe, Kouji Aoyama, Norihito Kaneto, Manabu Mima, Taishi Nakagawa of the Eagles; Takahiro Araki, Masato Nakazawa and Orlando Roman of the Swallows; Yuki Kuniyoshi, Hyuma Matsui and Kenjiro Tanaka of the Baystats and Itaru Hashimoto and Kazuto Taguchi of the Giants.

The remainder of the 36 card 1st Version Update subset (three cards per team) are the usual collection of late signing foreign players (Wily Mo Pena, Mitch Dening, Nate Schierholtz, Juan Francisco) and other players not included in 1st Version for whatever reason (including foreign players like Tony Barnette, Edison Barrios and Francisco Caraballo).  One player who was a bit of surprise to see was Fighters player-coash Satoshi Nakajima - this is his first appearance in a BBM flagship set since 2008.  Nakajima most plays with the ni-gun team - he's played in around 30 ichi-gun games over the last seven years.  Jim Allen is fond of pointing out that he's the last Hankyu Brave still playing.

I've dubbed the theme of the 12 team cards as "Post Victory Celebrations".  Each card (with maybe two exceptions) depicts either on field celebrating or something postgame:

The 36 cards in the "Cross Plasma" subset are a continuation of the subset that began in the this year's 1st Version set and continued in Sports Card Magazine #110.  In past years the "Cross" cross set subset has continued into the high end set (Touch The Game and Genesis) but it does not appear that that is the case this year.  I am curious to see if SCM #113 that is due out at the end of this month will contain 12 more Cross Plasma cards.  As always, this subset is numbered separately from the rest of the set:

All the cards can be seen at Jambalaya.