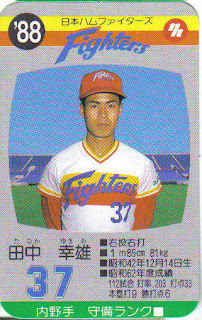 Takara produced team sets of playable baseball cards from 1978 until 1998. Each team set would come in a box containing the 30 player cards (and one team logo card), a pair of dice and a paper playing field to be used as a game board. The fronts of the player cards featured a picture of the player along with biographical information. The backs of the cards had the information for the player for playing the game - basically the outcomes of rolling the dice. 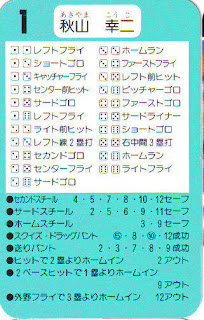 I really don't have any idea how to play the game, but I've been saving a post from the old Yahoo Japanese Baseball group since October of 2001 that contained instructions:


Great to know there are other fans out there that have that game!!

First, preparation. Each team prepares 9 players each, making a side.
Place the pitcher on the mound of the field and the batter in the batters box, runners on the bases. Fielders - place them to the side. Make sure they are organised so you have a set batting order. I like to place them alongside the field like a bench.

Ok, the basics are, you should have a paper field. and there should be a grid on that field of the dice (you are supposed to have two dice). Each person rolls the dice (defending team and the offensive team) and you determine the result by the combination. For example 6 and 4 may be a 'ball'.

If from the combination you get 'H', it means it's a hit. If you get this you flip over the card of the batter in the box and then determine the result of the 'hit'. For example 5 and 2 may be a Homerun for Tomonori Maeda, 4 and 1 may be a ground out for Ichiro.

So when you get a single or a double you put that batter to that base. 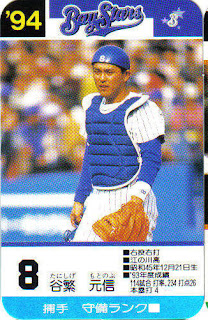 For stealing, bunt, squeeze play, long running etc, it is listed on the bottom of the player's card. Same rules apply, I will go through some examples: (Claim means notifying the other person)

Bunt: when you get 'H' claim a bunt and roll the dice, if you get the numbers (sum of the dice) listed for succesful bunt you are successful, but otherwise fail.

Steal: With a runner on base to steal claim a steal, and then roll the dice,
if the sum of the dice matches the numbers listed to suceed a steal you're in.

Long running: This is for example a runner on first scoring home from a double, for this after the player hits a double and you have a runner on first instead of just hitting third claim a run to home and roll the dice, same procedure. 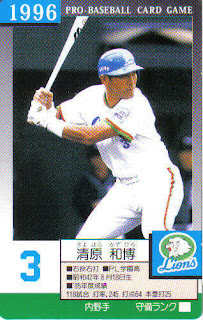 They are the basics, if you need to know anymore or if my explanation was a bit cheap, don't hesitate to let me know and I will be more than happy to talk to you more about it. 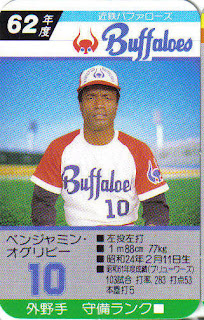 Takara cards are a challenge to people like me - the non-Japanese reading card collector. There's pretty much no English on the cards, so identifying players was tricky for me until I bought Gary Engel's "Japanese Baseball Card Checklist And Price Guide", which contains checklist for almost all the Takara issues. One of interesting things about the cards is that from 1979 until 1987, the cards indicated their year of issue by the year's Showa period year. So for example, 1979 was the 54th year of Emperor Hirohito's reign, so it was year 54 of the Showa period. (Somebody please correct me if I'm messing this up!) Starting in 1988, they used the "western" year on the card, however the birthdates of the players continued to be listed as Showa period years. (And just to be complete, the cards in 1978 didn't list the year on them.) 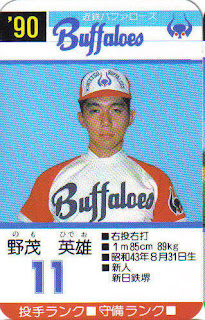 In Rob Fitts' Introduction To Japanese Baseball Cards, he mentions that "Takara sets include many players' true rookie cards and the only cards of many gaijin players." I'm not sure which gaijin players he means, but I do know a couple of the rookie cards. Hiromitsu Ochiai's first card was from the 1981 Takara Lotte Orions set. He would not have a Calbee card until 1985. Hideo Nomo's rookie card is from the 1990 Takara Kintetsu Buffaloes set. Nomo would not have a Calbee card until the following year. (Oddly enough, the other Rookie of the Year from 1990, Tsuyoshi Yoda did not have a card in the 1990 Chunichi Dragons Takara set.) 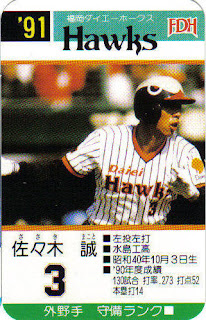 Prior to 1991, the pictures on the cards were simple head shots of the players. Most of the pictures were very similar from year to year. Starting in 1991, however, most of the pictures were action shots. I suspect this had something to do with BBM starting up in 1991, but I don't know that for sure. (I call the pre-1991 years the "mug shot era".) The basic design of the cards stayed pretty similar from year to year, especially from 1989 to 1995 where it really looks like the only thing that changed was the year. 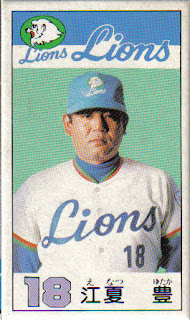 Takara produced a set of 20 card team sets in 1984 that are referred to as the "Takara Kids" sets. The intent was to have a simpler dice game aimed at children. The cards were a bit smaller and were thick card board, like the old menko cards.

I have the 1997 Takara Giants set - it's actually the most recent Takara set I have and the only one I have from 1997. It contains a card for Giants' manager Shigeo Nagashima. There's a couple of odd things about this card - there's no game playing information on the back (which kind of makes sense); it's not listed in Gary Engel's checklist; and (most surprisingly) the name on the card is printed in English. I don't know if all the team sets in 1997 had manager cards or if the Giants were special. Any light anyone can shine on this for me would be appreciated. (Of course, if I'd break down and buy the latest edition of the Checklist, I might be able to answer this myself...) 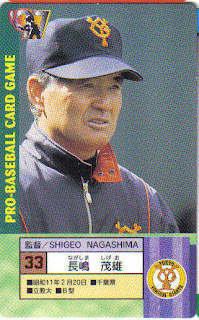 Takara stopped producing the sets after 1998. I don't know why they stopped or even if the company is still in business.

I'm in the process of getting all of the Takara set checklists added to TradingCardDB and Zistle as well. About halfway done.

On another note, I've added all of my available Takara cards on my new eCrater store.

Good to know. Thanks!

Does anyone have a cheat sheet or some way to translate the cards and results?