Card Of The Week February 17

On Fridays, my oldest daughter has a class called "It's Academic", which is "a trivia game kind of thing" (according to her). It's a 7th period elective. They don't compete on the actual TV show (yet), but they have a lot of fun. Anyway, last week, my daughter knew the answer to a question due to her father's odd hobby - "What Japanese baseball player hit the most home runs ever?" Unfortunatly, before she could answer, one of her teamates blurted out "Lou Gehrig" which was wrong for many reasons. Anyway, in honor of my daughter paying some attention to her father's geekiness, here's a card of the correct answer (whose name my daughter says her teacher could not pronounce): 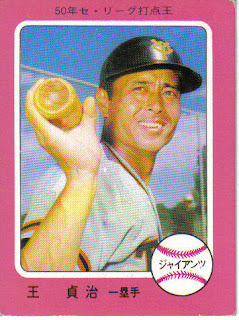 I really enjoy your blogs on Japanese Baseball cards. There very informative. I started collecting Japanese baseball cards about two years ago, especially Ichiro. I wish there were more available. I started to show off my collection on a site called Flickr. If you want to see it go to --> http://www.flickr.com/people/ichirocollection/?search=ichirocollection

Thank you again for those blogs.