Card Of The Week January 10

Tomoyuki Sugano's posting expired last Thursday without him reaching a contract with an MLB team which means he'll be returning to Japan and the Yomiuri Giants for the 2021 season.  With Haruki Nishikawa and Na Sung-bum's posting also expiring with no contract there will only be two players moving from the Far East to MLB this year via the posting system - Kohei Arihara and Kim Ha-seong.

I picked up this card of Sugano recently.  The Giants, like several other teams, have sold "Winning Game Cards" in the past although I don't know if any of them are still doing it.  This is the card for the Giants 6-4 win against the Dragons on April 6th, 2013.  It was Sugano's second career start and his first career victory: 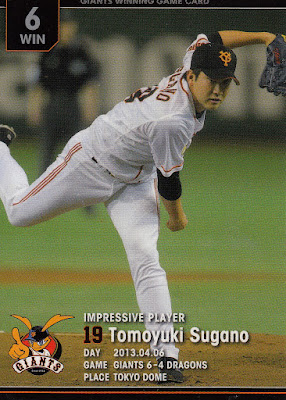 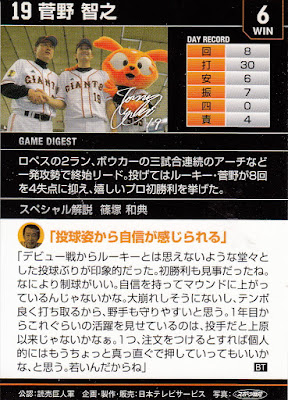 I want to point out that my scanner took it upon itself to cut off a little bit at the top of the scan of the front of the card.