Having done a post for the 1979 TCMA set the other day, I thought it'd be good to do one for the other common US made Japanese card set - the 1987 "Play Ball Japan" set.

Like the TCMA set, there is an emphasis on Western players in the set.  20 of the 42 cards are of Western players including Bob Horner, Warren Cromartie, Randy Bass, Leon and Leron Lee, Ben Oglivie, Brad Lesley, Boomer Wells, Pat Putnam and Randy Johnson (this one, not that one).  In fact, according to the list of Westerners playing in Japan in 1987 included in Baseball America's 1988 Almanac, the only ones not included in the set were Jim Adduci of the Whales and Bobby Castillo of the Dragons (and Castillo only appeared in two games). (UPDATE - Baseball America's Almanac apparently does not contain a definitive list of gaijin - Sixto Lezcano appeared in 20 games for the Whales but does not appear in this set.)

There's only five Hall Of Famers in the set - Hiromitsu Kadota, Sachio Kinugas, Manabu Kittabeppu, Hiromitsu Ochiai and Sadaharu Oh (Giants manager).  Kazuhiro Kiyohara is the sole member of the Meikyukai who is not a Hall Of Famer in the set.  There's several other big stars who appear in the set including Masayuki Kakefu, Suguru Egawa, Hiromichi Ishige, Akinobu Mayumi and current Lions manager Hisanobu Watanabe.

With a set this small, however, there's a number of guys missing.  Yutaka Fukumoto, Osamu Higashio, Choji Murata, Yutaka Ono, Tsutomu Wakamatsu and Hisashi Yamada are all in the Hall Of Fame but not in this set.  Meikyukai members Koji Akiyama, Hiromasa Arai, Hideji Kato, Norihiro Komada, Kimiyasu Kudoh and Yasunori Ohshima are also missing as are Tatsunori Hara and Masumi Kuwata.

The design of the set is very simple - full bleed photos with the player name in white text across the bottom of the card.  Like the TCMA set, all the photos are posed shots although I don't think the photography is quite as good.  Here are some sample cards:

This set shows up on Ebay quite often and quite inexpensively.  It's worth picking up but I wouldn't spend more than $10 to $15 on it myself.

UPDATE - just for fun, I decided to compare who was in this set with who was in Epoch's All Japan Baseball Foundation 1987 set from a few years back.  There are 9 players who appear in both sets - Hideo Furuya, Hiromichi Ishige, Kazuhiko Ishimine, Sachio Kinugasa, Hiromi Matsunaga, Sadaharu Oh, Katsuo Soh, Yutaka Takagi and Kazunori Yamamoto.  The Epoch set includes some of the guys I felt were missing from the Play Ball Japan set - Akiyama, Arai, Hara, Kato, Kuwata, and Ono while Play Ball has a hadful of the guys I felt were missing from the Epoch set - the gaijin players and Ochiai.  I feel like these two sets combined are about two thirds of what a good 1987 set would include.

UPDATE #2 - at Jason's request, here's what a card back looks like: 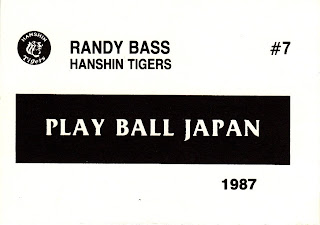 I believe that the the 1987 "Play Ball Japan" set was issued / created by Ed Broder.

Hmm, that would be interesting. Thanks Scott!

Anything on the back of these?

Not much. Team logo, player name, team name, card number, big black box with the words "Play Ball Japan" and the text "1987" (not in the box). If I get a chance tomorrow, I'll post a picture of the card back.

Oh...there was also a 1988 Play Ball America set done, similar black box on the back, but with no player details or card numbers. 24 cards, pretty much the same mainstream MLB players that populated most Broder-style unlicensed sets from 1986-1990.