The majority of the menko cards that I've seen feature posed pictures of players.  There are only a few that I've seen that feature actual game action, mostly from a couple of the late 1950's Doyusha sets.  But I picked up three cards a few weeks ago featuring game action in a way I had never seen before on a menko card - black and white photos of multiple players during a game.

I really don't know much about these cards.  Let me show them off before I talk too much about what I'm guessing about them.

Here's the front and back of the first card: 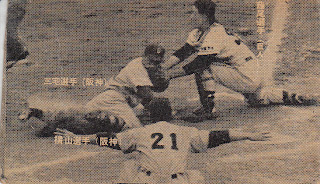 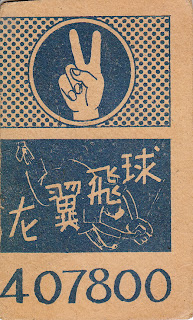 This card shows a play at the plate where it looks like Giants catcher Shigeru Fujio is tagging out Tigers baserunner Hidesho Miyake.  Koji Yokoyama (#21) of the Tigers is perhaps a tad too optimistic in his "safe" call given that Fujio has his glove on Miyake who is nowhere near the plate.  We can only assume that Fujio is actually holding the ball. 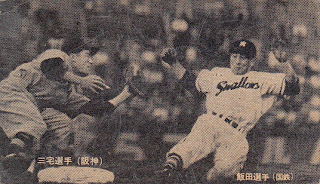 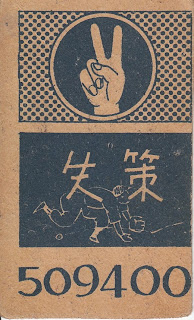 This card shows Tokuji Iida of the Swallows sliding into a base (I'm assuming third) while Miyake waits for the throw.  I don't see the ball in the shot so I'm going to guess that Iida was safe. 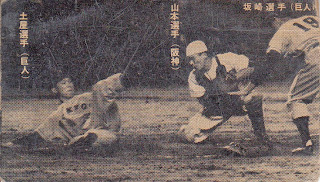 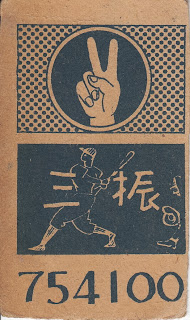 This last card is kind of the inverse of the first in that it has a Tigers catcher and a couple of Giants players.  The catcher is Tetsuya Yamamoto, the Giant sliding is Masataka Tsuchiya and the standing player (#19) is Kazuhiko Sakazaki.  Not really sure where the plate or the ball is so I have no idea if Tsuchiya's going to score or not.

The cards appear to be uncatalogued.  The backs appear kind of similar to some of the Marusan issues from the late 1950's as well as a couple sets listed in Engle as JCM 131a-c, JCM 132 and JCM 133.  I'm guessing that the year the pictures were taken in (assuming they were taken in the same year) is 1957 as (1) Iida's first season with the Swallows was 1957 and (2) according to "The History Of Uniform", the Tigers home hats were white up until 1957 and black afterwards...and Yamamoto's hat is white on the third card.

I'd appreciate any information anyone has on these cards.
Posted by NPB Card Guy at 5:23 PM