Last week the World Champion Boston Red Sox (sorry, I just like the way that sounds :-)) signed former Chiba Lotte Marine pitcher Shunsuke Watanabe.  Watanabe was drafted by the Marines in the fourth round of the 2001 draft (which I will point out wearily again was held in the fall of 2000) from the industrial league team Shin Nittetsu Kimitsu and has been with the Marines ever since.

Watanabe is a submariner who's release point is two inches off the ground (according to Japan Baseball Daily).  You can see a couple videos of his motion here.

Watanabe is rather unique in that I think he's the first Japanese player to come to the US who actually has a "pre-rookie" card in Japan.  He was chosen for the Japanese National Team for the 2000 Olympics while still a member of Shin Nettetsu Kimitsu and ended up having a card in the 2000 Upper Deck Japanese Olympic Team set (which I don't have yet).  His BBM rookie card is #488 in the 2001 set.  He also has a "Star Rookie" card in the 2001 Upper Deck set (#24).  He also appears in a couple other 2001 sets - the Konami Field Of 9 collectible card game set and the Future Bee Marines set (which includes an autograph card).  His first Calbee card was not until 2005 (#022).

Watanabe has appeared in each "flagship" BBM set since 2001 with the exceptions of the 2002 1st Version and 2013 2nd Version sets.  He's a bit less regular in the Calbee sets - after his first card in 2005 he didn't appear again until 2007.  He had a Calbee card each year after that until this year.  He made the All Star team twice so he appears in two of the BBM All Star sets - 2004 and 2005.  The Marines won the Nippon Series twice while Watanabe pitched for them so he appears in two of the BBM Nippon Series sets - 2005 and 2010.  He threw a complete game, four hit shutout against the Tigers in the 2005 Series which earned him an "Outstanding Player" award so he actually has two cards in that Nippon Series set.

In addition to playing for Team Japan in the 2000 Olympics, Watanabe also pitched in the 2006 and 2009 World Baseball Classics.  He had four different "regular" cards among Upper Deck's 2006 WBC issues and two among Topps' 2009 WBC cards, along with numerous parallel and memorabilia cards both years.  He also appeared in the 2009 Konami WBC set.

Here's some other example cards.  As always, this is not meant to be comprehensive - you can see the full list of his cards over at Sports Card Forum's Inventory Manager.  You'll notice that the fact that he's a submariner was not ignored by the card makers...

On a personal note, I was able to see Watanabe pitch last March when I went to a Marines-Lions open-sen game at Seibu Dome.  Here's a picture I took of him: 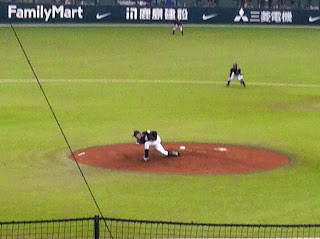