Card Of The Week August 14

The Chunichi Dragons have been having a very poor season so far this year and last week their manager, Motonobu Tanishige, resigned after being asked to step down.  He is being replaced on an interim basis by head coach Shigekazu Mori.  Rumor has it that Dragons ni-gun Michihiro Ogasawara is the front runner to replace Tanishige on a permanent basis.

Mori has coached for the Dragons since 2004 with the exception of 2012-13 when he was a sports commentator.  It looks like Hiromitsu Ochiai brought him in when he became manager in 2004 and Mori resigned when Ochiai was let go after the 2011 season.  Ochiai then brought him back when he took over as GM in 2014.

Mori spent 10 years as a pitcher with the Seibu Lions from 1979 to 1988 and another 11 years as a coach for them.  He had a couple two year stints coaching with the Fighters and Baystars before joining the Dragons. 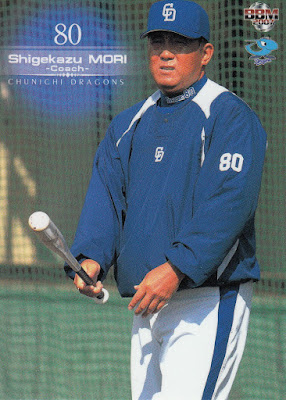 Sadly the Dragons have been pretty pitiful ever since I moved to Nagoya. Tanishige was pretty popular and his predecessor didn`t have much luck either, but I guess someone had to take the fall.