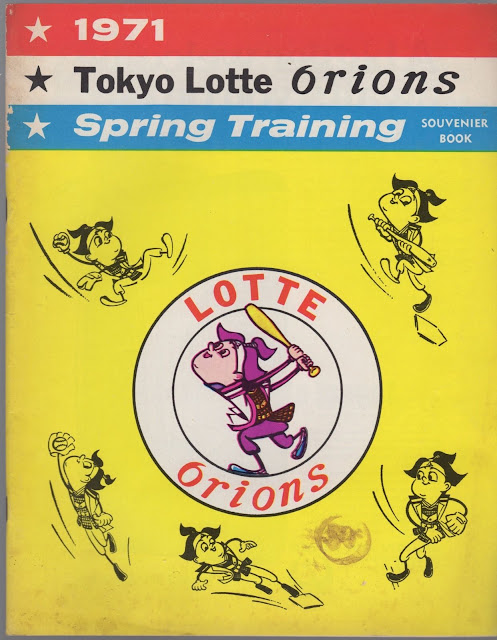 Someone had recently put a 1971 Lotte Orions spring training program up on Ebay.  What makes this program interesting is that the Orions did their spring training in 1971 in Casa Grande, Arizona as guests of the San Francisco Giants.  I bid on the program but unfortunately did not win it.  The seller had scanned a number of pages from the program that were interesting so I decided to go ahead and do a post about it even though I didn't actually own it.

One of the things I wanted to find out from the program was to answer a question about Hideo Iijima.  Iijima was a former Olympic sprinter that Lotte had as a pinch runner on their roster from 1969 to 1971.  When I had learned that Lotte had done spring training in Arizona when Iijima was with the team I wondered if Oakland A's owner Charlie Finley had gotten the idea of hiring his own Olympic sprinter (Herb Washington) as a pinch runner from the Orions.  The missing piece of this was whether or not Iijima had come to Arizona with the Orions - I know that the Fighters did not send the entire roster to Arizona the past two Februarys so it wasn't out of the question that not all of the Orions came.  Luckily though one of the scans the seller put up answered this question: 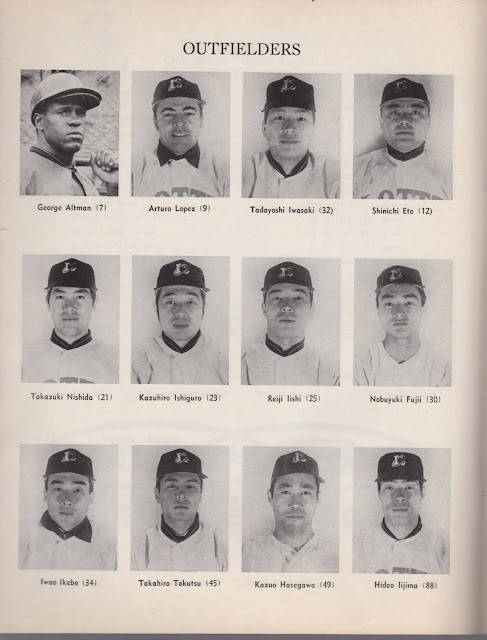 I was lucky that both of the Western players with the Orions that season - George Altman and Arturo Lopez - were outfielders and therefore on the same page with Iijima.  So I still don't know if Finley got the idea to hire Washington from Lotte but at least all the pieces are in place that it COULD have happened.

One of the other pages showed the team's spring training schedule.  They played 21 games during the month between March 5th and April 4th.  What I found most interesting is that they played three games in actual MLB parks - at Anaheim Stadium on March 31 against the then California Angels and two games at Candlestick Park against the Giants on April 3rd and 4th.  I don't know when the NPB schedule began that season but the MLB season kicked off on April 5th (although the Giants' opener was on April 6th in San Diego).  So obviously unlike the Fighters the past two seasons who only had the early part of spring training in Arizona, the Orions spent their entire spring training up to Opening Day overseas (well I assume they got a few days to recover from the flight home). 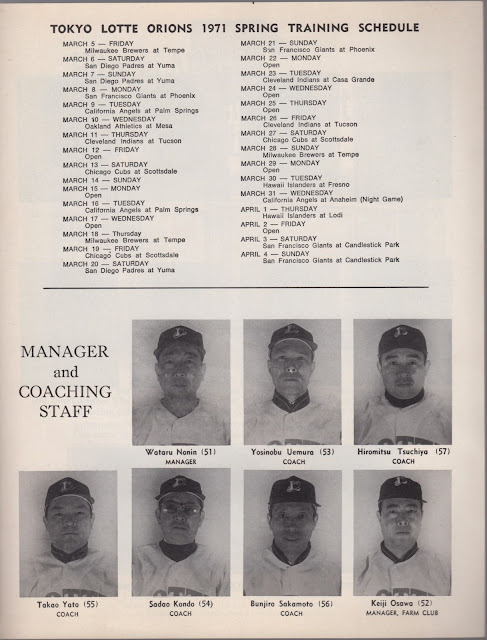 Too bad the Fighters didn't issue a cool item like this for their spring training stints in Arizona the past two seasons.  I'll keep an eye out on Ebay for another copy of this or something similar for other teams who trained in the US.
Posted by NPB Card Guy at 8:32 AM

Very cool program. It'd be neat to find a ticket stub for one of the Candlestick Park games.