In 1995 the Orix Blue Wave won the Pacific League Pennant for the first time since the franchise had been purchased from Hankyu after the 1988 season and relocated to Kobe in 1991.  It was the first pennant for the franchise since 1984.  In January of 1995 the Kansei region had been rocked by the Great Hanshin Earthquake which had its epicenter near Kobe.  The success of the Blue Wave that season helped rally the people of Kobe during their recovery.

Late in the season BBM issued a 40 card box set for the team.  This would be the first time that the company would issue a box set for a pennant winner.  At this point in time BBM had only done one or two team box sets - both for the Hanshin Tigers (one in 1994 and the other in 1995 although I don't know if it was issued before the Orix set).  I believe although I don't know for certain that BBM issued the set before the end of the regular season.  Orix ended up winning the pennant by 12 games over second place Lotte so it was probably pretty apparent by say August or September that they were going to win the pennant. 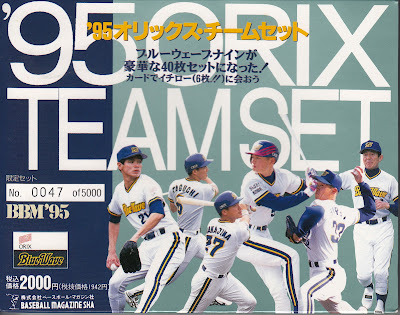 As I mentioned, the set contained 40 cards.  All 40 cards were base set cards - there were no inserts, parallels, autographs or memorabilia cards.  The first 30 cards in the set were the "regular" player cards and include Ichiro, So Taguchi, Shigetoshi Hasegawa, Satoshi Nakajima, Akinobu Okada, Nobuyuki Hoshino, Masumi Hirai, Koji Noda, Troy Neel and Doug Jennings along with manager Akira Ohgi.  10 of these cards had gold facsimile autographs on the front (Yasuo Fujii, Hagegawa, Hoshino, Nakajima, Noda, Hirofumi Ogawa, Yoshinori Satoh, Ichiro, Taguchi and Satoshi Takahashi.


The backs of the cards are a bit unusual for BBM in that they have a big picture of the player:

The remaining 10 cards in the set were broken into several subsets.  Cards 31 & 32 feature multiple players.  Card #31 has Ichiro and Taguchi on it and is called "Blue Thunder".  Card #32 is called "Blue Wave Fireman" and has Masafumi Hirai and Takahito Nomura on it.

Cards 33-37 feature the "Best" players on the team.  Ichiro has three of these cards "Best Hitter", "Best Baserunner" and "Best Defense".  The other two are Koji Noda ("Best Starter") and Masafumi Hirai ("Best Reliever").


If you've been counting along at home you'll have come to the realization that there are six Ichiro cards in the set.

5000 of these sets were made.  Apparently these sets were so popular with Orix fans that BBM ended up issuing a second 40 card box set for the team.  I don't know for certain but I think that the first 30 cards in the second set (known as "Orix Team Set II") are identical to the corresponding cards in the first set except that the players' names are in red instead of gold (don't know about the facsimile signatures).  I think (although again I don't know for sure) that cards 31-38 of the later set featured the "Team Leaders" in a number of categories.  Card #39 was for the "Moment Of Victory" when the Blue Wave actually clinched the pennant and card #40 was another Ichiro card labelled "The Natural" (although featuring a different photo and no kira finish).  The second set has five total Ichiro cards.

Orix ultimately lost the Nippon Series that season to the Yakult Swallows but bounced back in 1996 to defeat the Yomiuri Giants for the franchises most recent Nippon Series Championship.

Lightening struck again for BBM in 1998.  The Yokohama Baystars won the Central League pennant for the first time since 1960 when they were the Taiyo Whales and played in Kawasaki.  BBM again issued a 40 card box set (called "Get The Flag!") and again I think it was published before the end of the regular season (although the race was much closer than the 1995 PL race - the Baystars ended the season only four games ahead of the second place Chunichi Dragons).  As in 1995 the run of 5000 box sets sold out quickly and BBM ended up issuing a second set - this time the print run was 10,000. 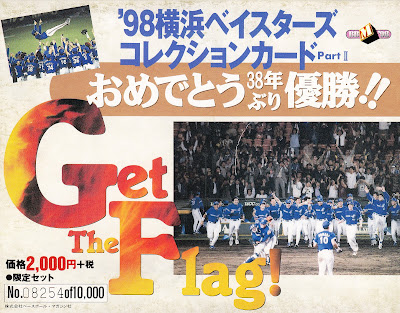 Like the Orix sets, the 40 cards in these sets contained only base cards - no inserts, parallels, autographed or memorabilia cards.  The first 31 cards in the set are cards for manager Hiroshi Gondoh and various Baystars players including Kazuhiro Sasaki, Daisuke Miura, Tajuro Ishii, Motonobu Tanishige, Norihiro Komada, Bobby Rose, Takanori Suzuki and Takashi Saitoh.


The next six cards in the set contain members of the 1960 Taiyo Whales - manager Osamu Mihara and players Noburo Akiyama, Kiyoshi Doi, Akihito Kondoh, Kazuhiko Kondoh and Takeshi Kuwata.  All the cards are black and white with a bit of a sepia tinge.


The final three cards in the set are entitled "Baystars Returned Glory!" and feature scenes from the Baystars' pennant clinching victory on October 8, 1998.  There's one card showing the traditional doage for Gondoh, a card showing Tanishige and I think Sasaki embracing after the last out and a card showing the players saluting their fans.

The final nine cards in the first set are completely different than the final nine cards in the second set.  There's three multi-player cards but only the first one of these feature players on the 1998 team - Sasaki, Rose and Suzuki.  The other two cards have former Yokohama players - one has Akio Saitoh and Kazuhiko Endoh while the other features Daisuke Yamashita and Tomio Tashiro.  The next three cards feature "Memorable Moments" from 1998 and the final three cards all feature Sasaki.

The Baystars went on to defeat the Lions in the Nippon Series that year.  It was the last time that they made the Series until last fall.

As always, Gary Engel's "Japanese Baseball Card and Price Guide - 7th Edition" was invaluable in researching this topic.
Posted by NPB Card Guy at 11:53 AM