This card (#344) from the 1975/76 Calbee set* shows 1975 Pacific League MVP Hideji Kato (#10 on the left) along with two of his Hankyu Brave teammates - pitcher Takashi Yamaguchi (#18 in the center) and catcher Kenichirō Kawamura (on the right).  I had originally thought this photo might show this happy trio celebrating winning the 1975 Nippon Series but after doing a little research I don't think that's the case.  The Braves won the deciding Game Six of the 75 Series at home while the players are wearing their away uniforms in this photo.  In addition the Braves catcher for that game was Shinji Nakazawa, their regular catcher that season.  However this photo could be from Hanyku's 2-1 victory in Game Five two days earlier - that game was played in Hiroshima, Yamaguchi got the save and Kawamura was the catcher.  Or it's just from some random game in 1975 - I don't think there's anything on the card that actually says it's from the Series.  Regardless I think it's a pretty cool card. 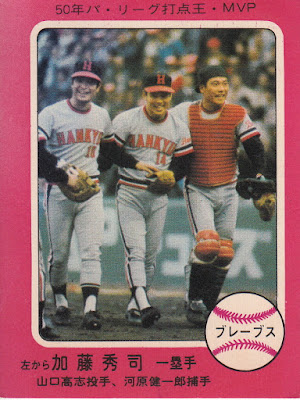 That is a cool card, I don't have my 75-76-77s handy but I'm pretty sure I have that one, does the back say anything about when it was taken?

There wasn't anything that obviously looked like a date although it could have just said "Game Five" and I wouldn't have recognized it. I think the card itself is to commemorate Katoh being the PL MVP (hence the text on the top of the card) so it wouldn't surprise me if the back just talked about how good of a season he had in 1975.